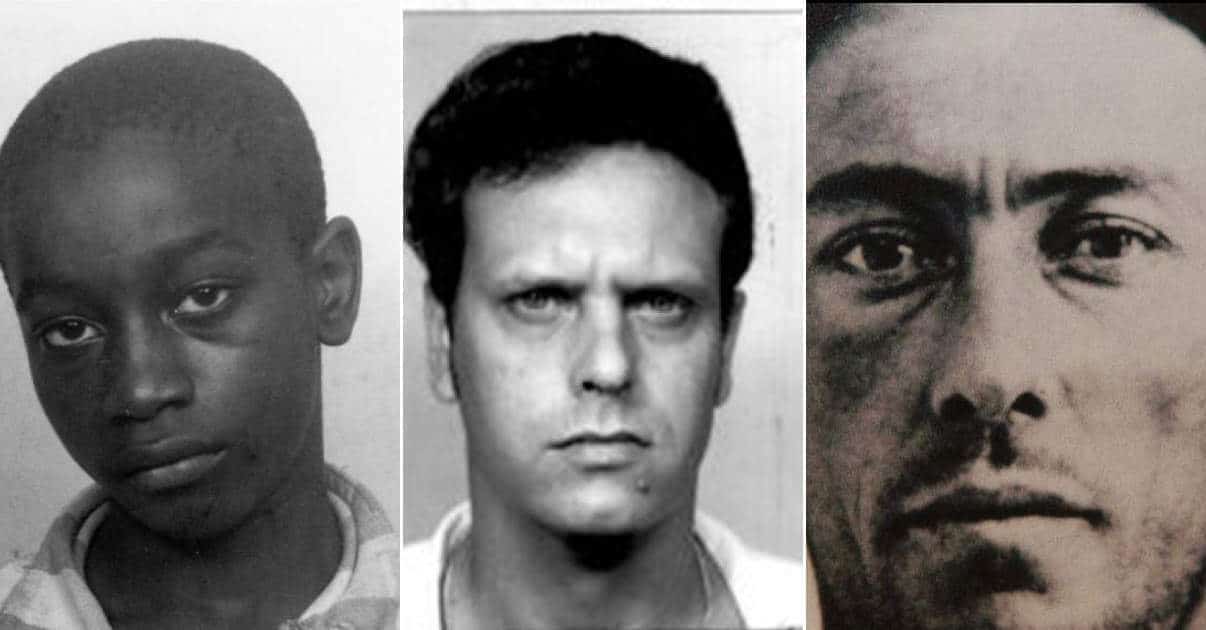 The case of Jesse Tafero is tragic not only because he was eventually declared innocent of the crime for which he was convicted, but because his execution was considered to be incredibly inhumane. In 1976, Tafero was traveling with his girlfriend Sonia Jacobs, their ten-month-old daughter, Jacobs’ 6-year-old son, and a friend, Walter Norman Rhodes. They had pulled off the road in Florida and were sleeping in their car when they were approached by police officer Phillip Black and a visiting Canadian constable, Donald Irwin. Black and Irwin were shot to death.

Jacobs and Tafero were arrested, and they told police that Walter Norman Rhodes fired the gun and only went with Rhodes because they felt they had no other choice. There was gunpowder residue found on the hands of Tafero (who said Rhodes later handed him the gun) and Rhodes, but none on Jacobs. Rhodes testified that Tafero and Jacobs had pulled the trigger in exchange for a reduced sentence. The only other evidence that directly pointed to Jacobs and Tafero as the shooters were the testimony of an inmate who claimed that Jacobs had confessed while they were in prison. Both Jacobs and Tafero were found guilty and sentenced to death.

Both maintained their innocence and fought for appeals. They filed writs of habeas corpus against the testimonies that put them in jail. Rhodes recanted his testimony and admitted he fired the shots, but then reverted back to his original story. Tafero’s time ran out and he was sent to the electric chair on May 4, 1990. The execution was stopped three times when fire and smoke started coming out of Tafero’s head. He was still alive, moving and breathing when they halted the execution the first time.

After Tafero’s gruesome death, Rhodes finally admitted to authorities that he had been the shooter, but no changes were made to his sentence and he was released on parole in 1994.

The Gun Alley Murder took place in 1921 in Melbourne, Australia. 12-year-old Alma Tirtschke was sent on an errand for her aunt and never returned. She was eventually found raped and strangled in the Gun Alley. Headlines reported the gruesome crime and claimed that there was a maniac on the loose that was likely to strike again. With the newspapers causing panic, the police were desperate to quickly find the killer. Ross reported to police that he had seen the girl walk by his saloon and other witness stated they had seen the girl look worried as a man (who they identified as someone other than Colin Campbell Ross) was following her. The police focused their attention on Ross because of his prior police record (he was acquitted of shooting and robbing one of his customers).

As the interviews with the police continued, Ross told them of a number of witnesses who were at his saloon and could testify that he had never left the bar. These witnesses were never questioned. On January 12,1921, Ross was arrested and charged with murder. At the trial, a jailhouse witness who had a history of committing perjury told the jury that Ross had confessed to him.

Two other witnesses, a prostitute and a fortune-teller, split part of the reward money when they testified that Ross confessed to them. Hairs from Alma Tirtschke were compared with hairs found at Ross’ home, one blonde and one red, but an examiner still testified they came from the same person.

Ross was found guilty and sentenced to death. His hanging used a new type of rope that did not break his neck, only fractured it. For several minutes, he struggled against the rope as he slowly strangled to death. For decades, numerous people sought to clear Ross’ name, and on May 8, 2008, he became the only judicially executed person to be pardoned in Australian history.

In July 1982, the city of Waco, Texas was horrified by the brutal murders of three teenagers, two girls and a boy. Deputy Truman Simmons got the idea that local store owner Muneer Mohammad Deeb hired three men (including David Wayne Spence) to kill a woman named Gayle Kelly. But Gayle Kelly was not even one of the victims. Deputy Simmons claimed that the killers had mistaken one of the girls as Kelly, and then killed the others because they were witnesses.

Spence, Deeb, and two other men were arrested with no evidence to prove their guilt. There were no witnesses that placed them at the scene. Despite the brutality of the murders and the belief that the girls had been raped, there was no physical evidence that tied any of the three men to the murders. The only thing that linked the men to the murders were some supposed jailhouse confessions that other inmates claimed that the men had made. Many of these men later recanted their stories and admitted they had been offered lighter sentences or the opportunity to have sex with their wives or girlfriends in the district attorney’s office.

With so little evidence, there was no way to get a conviction, until bite mark specialist Homer Campbell testified that the marks left on the bodies could have been made by none other than David Wayne Spence. He said that he used enhanced pictures of the bodies and molds of Spence’s teeth to conclude without a doubt that Spence had made the bite marks.

In 1993, Spence’s lawyers sent the pictures and molds of Spence’s teeth to five experts around the country. Some were unwilling to judge the marks as even being made by teeth, and none were able to match the molds to the marks. In 1993, Deeb, who had also been sentenced to death, appealed his case and won. He was released from prison. David Wayne Spence was not successful in his appeal and was executed by lethal injection in 1997.

Harry Gleeson remains the only executed person to be pardoned in Ireland, and it took 76 years for it to happen. Mary “Moll” McCarthy lived in a small run-down cottage near the farm of a man named John Caesar. She was a bit of an outcast, being a single mother of 7 children by at least 6 different fathers. On November 21, 1940, Harry Gleeson was working on his uncle John Caesar’s farm when he discovered McCarthy’s body.

She had been shot twice in the face. Seven days later Gleeson was arrested for her murder. The Irish police force claimed that Gleeson was the father of McCarthy’s seventh child. Though the child had died in infancy, police claimed that Gleeson killed McCarthy to keep his uncle from finding out about the illegitimate child. Gleeson believed his uncle would cut him out of his inheritance if he discovered the truth.

There was little evidence against Gleeson. Prosecutors claimed that the time of death was the evening of November 20, but medical records suggested that the time of death was sometime on November 21. Gleeson had an alibi for the November 21, but not for the night before. Harry’s aunt and uncle were never called in to testify on his behalf despite the fact that they were considered to be very trustworthy by the police. Prosecutors claimed that John Caesar bought ammunition for his shotgun which matched the bullets used to kill McCarthy, but the registration at the shop told a different story.

Gleeson was found guilty and hanged in February 1941 despite the claims from his family, his lawyers, and numerous members of the community that he could not be guilty. For decades, people investigated the case, with some going as far as to claim that it was a member of the police that had fathered McCarthy’s seventh child, killed her, and accused Gleeson to protect himself. Finally, on December 19, 2015, President Michael D. Higgins signed the only posthumous pardon in Irish history for Harry Gleeson, and it was presented to his family during a ceremony the following year.

Timothy Evans stands as a testament to the unfortunate situation of people with mental illness in the legal system. Evans was always slow to meet his developmental milestones growing up and he suffered from tubercular sore on his right foot. The sore never healed and would often keep him out of school. By the time he left school, he was still completely illiterate. As an adult, he struggled to find work, finding that his foot prevented him from working in the coal mines. In 1947 he was living in London when he and his wife Beryl had a daughter, Geraldine Evans.

The couple had a relationship that was fraught with arguments and violence. They struggled to make ends meet, and in 1949, Beryl became pregnant again. Without enough money to support themselves, much less another child, they believed that their only option was an abortion. On November 30, 1949, Evans showed up at the police station and said that he had given Beryl a mixture to abort the baby and had accidentally killed her. He said that he placed her body in a drainage ditch. Police never found the body, which prompted Evans to change his story. He said that a man named John Christie had agreed to perform the abortion and that Beryl had died during the procedure.

The Evans’ lived on the top floor of 10 Rillington Place and John Christie and his wife lived on the bottom floor. When police searched the home, they found the bodies of both Beryl and Geraldine. They had been strangled. The trial against Evans took 3 days, and a jury found him guilty in 40 minutes. He was executed on March 9, 1950. Three years later, police found numerous bodies at 10 Rillington Place. All of the women that had been killed and abused by John Christie.

These bodies were missed in the original search for Beryl and Geraldine, including the human thigh bone that was used to prop open a fence. It wasn’t until 1965 that an inquiry found that John Christie was the likely murderer of Beryl and Geraldine. Timothy Evans was granted a pardon in 1966.

The Washington Post – It Took 10 Minutes To Convict 14-Year-Old George Stinney Jr. It Took 70 Years After His Execution To Exonerate Him.

The Guardian – George Stinney Was Executed At 14. Can His Family Now Clear His Name?

Texas Monthly – Texas Executed Carlos DeLuna for Murder in 1989. A New Documentary Says He Was Innocent.

The Guardian – ‘He Died In Agony’: How Mistaken Identity Led To A Man’s Execution

The Guardian – £1.4m Award for Family Of Wrongfully Hanged Man

Sun Sentinel – Witness To Tafero Execution Has One Overriding Thought: The Horror Of It All