This Day In History: The First Medal of Honor Of The Vietnam War Is Awarded (1964) 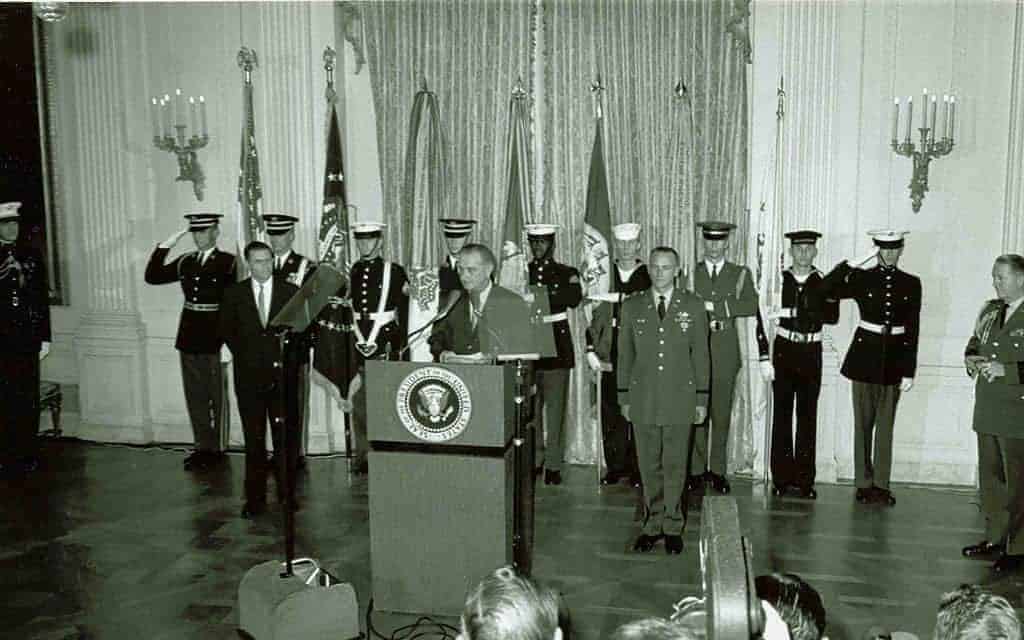 This Day In History: The First Medal of Honor Of The Vietnam War Is Awarded (1964)

The first Medal of Honor of the Vietnam War was awarded to a U.S. serviceman for action on this day in 1964. The highest American military award was given to Captain Roger Donlon of New York, for his heroism under fire in the early part of the year.

Captain Donlon was leading a special forces unit into a mountain outpost near the border with Laos. The area was known to be a hotbed of communist activity. The orders for Donlon and his men were that they hold the outpost. They were joined by a band of local tribesmen from the Nung, hill-tribe and a unit of South Vietnamese troops. Not long after they had taken up position the outpost was attacked in the early hours. The attack took place on July the 6th. The attack was carried out by a large group of Viet Cong.

The Americans were heavily outnumbered and their position seemed hopeless. Donlon was shot in the stomach during the first phase of the attack by the Viet Cong. He did not seek medical attention but bound up his wounds with a hand-kerchief. He refused any medical attention. Donlon kept on fighting and he manned a mortar and a machine gun. He also threw many grenades at the enemy. The battle raged for some six hours and ended with the Americans still in control of the outpost. The Viet Cong disappeared and they left their dead behind.

The outpost was reached by some reinforcements the next morning. They were amazed at what they found. They found some 154 Viet Cong dead. Only two Americans were killed and ten wounded. The South Vietnamese and the Nung mercenaries lost some 40 men and about 60 wounded. Only after the outpost was safe would Donlon allow himself to be treated by a medic. He was later evacuated out of the outpost and hospitalized. He spent over a month in a hospital and made a full recovery. He later rejoined his unit and returned to active service. He successfully completed a six-month tour of duty and participated in many more battles and firefights. In a ceremony at the White House, Donlon received the Medal of Honor from the hands of President Lyndon Johnson.

He received his nation’s highest award, for “conspicuous gallantry, extraordinary heroism, and intrepidity at the risk of his own life above and beyond the call of duty.” Donlon was very humble and he spoke with real warmth of his fellow soldiers. He claimed that they deserved the medal as much as he did.

History Collection – Sergeant Peter Lemon: When Marijuana, the Vietnam War, and the Medal of Honor Came Together