The Mayaguez Incident: Final Battle of the Vietnam War 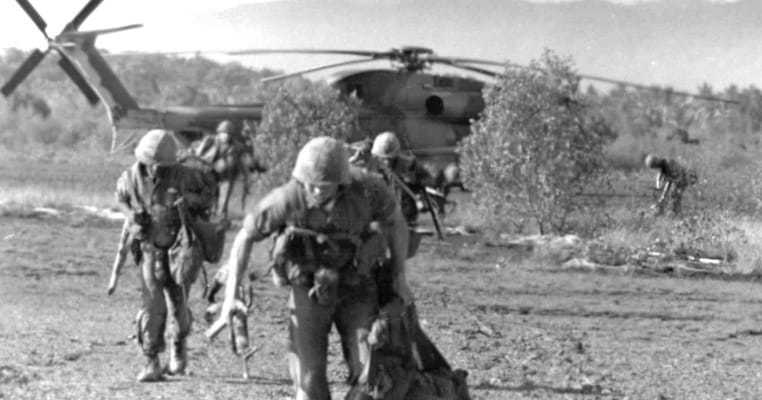 The Mayaguez Incident: Final Battle of the Vietnam War

1975 was a turbulent year for South East Asia. The Vietnam War was drawing to a close, bringing an end to more than 8 years of the most unpopular war in US history. And in spite of the thousands of lives and millions of dollars sacrificed, the thing that US planners feared most, the thing that had brought them into the war in the first place, had come to pass. Communist revolutions were sweeping across the region. In April, the North Vietnamese communists marched into the streets of Saigon, leaving them in complete control of the country.

And in Cambodia, the Khmer Rouge was advancing on the capital as the government forces rapidly ran out of ammunition. By the end of the month, the Khmer Rouge had come to power. What followed was one of the worst periods of mass-killing in human history. The Khmer Rouge wanted to transform Cambodia into a society without class. Farmers were forced off of their land and onto collective fields. There, they were forced to work 12-hour days with little food. Anyone who tried to gather food to survive was shot for practicing “capitalism.” Even wearing glasses was seen as a sign of being an intellectual and was grounds for execution.

But as the SS Mayaguez steamed through the Gulf of Thailand, the crew would have had little idea of what was going on in Cambodia. Still, they were giving the country a wide berth. The Mayaguez was a cargo ship registered to an American company. Obviously, this would have made them unwelcome in the waters of Cambodia. But the captain, Charles Miller, hoped to avoid trouble by sticking to the international waters off the coast. Unfortunately, as the ship steamed through the waves on the afternoon of May 12, 1975, trouble is exactly what he got.

The first sign that anything was wrong came when the crew spotted several small boats approaching the ship. One of the ships pulled up alongside the Mayaguez and fired a warning machine gun round across the bow. Captain Miller immediately ordered the ship to slow down. But when this didn’t happen soon enough for the men on the boats, one fired another warning shot. But this time, it came from a rocket-propelled grenade. Captain Miller then stopped the ship, and seven men from the boats boarded the Mayaguez with machine guns at the ready.

The men were from the Khmer Rouge, and they informed the captain that his ship had crossed into their territory. Gesturing at a map, their commander ordered the Mayaguez to sail to Poulo Wai island, which was controlled by the Khmer Rouge. After the ship anchored at the island, another group of Khmer Rouge soldiers boarded the ship to take control of the crew. Their leader told Captain Miller to sail to the city of Ream on the Cambodian Mainland. Miller now had a choice to make. Should he sail to Ream as a well-guarded prison cell, or was there some way he could save his ship?

Captian Miller’s situation was actually much worse than it looked on the surface. That’s because the Mayaguez wasn’t carrying normal cargo. The ship had put in at Saigon just days before the city fell and picked up sensitive military cargo for the US Government. If the Khmer Rouge found out that he was working for the military, the chance of his crew surviving would drop dramatically. Fortunately, the Khmer Rouge soldiers hadn’t bothered to inspect his cargo… yet. And Miller immediately destroyed a letter he was carrying from the military with his instructions.

Knowing that sailing to Ream would make any chance at rescue even more remote, Miller told the Khmer Rouge that his radar was broken. And with crude sign language, he made it clear that sailing to Ream would probably end up with the ship striking the rocks and sinking. The Cambodian commander radioed back to his superiors and told them about the broken radar. They ordered him to drop the anchor immediately and stay put. For the crew of the Mayaguez, Poulo Wai was going to be their prison for the time being. It was a huge stroke of luck. And though they didn’t know it at the time, it might have saved their lives.

Back in the United States, President Gerald Ford was getting the first word that an American ship had been captured by the Khmer Rouge. After the humiliating fall of Saigon, the US was about to take another blow to its military reputation if they couldn’t rescue the Mayaguez. The military leadership called for swift and decisive action. But Ford first tried diplomacy. The US made several attempts to pass a message through the Chinese to the Cambodians demanding the ship’s release, but the Chinese refused to help. Diplomacy had failed. The time had come to use force.

This wasn’t the first time an American ship had been seized by a rogue communist state. In 1968, the USS Pueblo, a Navy intelligence vessel was sailing in international waters off the coast of North Korea when it was approached by several North Korean patrol ships. The North Koreans boarded the Pueblo and took it back to the city Wonson. The ship’s crew was then blindfolded and taken to the capital. The US government decided it was too late to respond with force and 11 months of negotiation followed. Finally, the US was forced to make a humiliating admission that the ship had illegally entered North Korean waters, apologize, and promise not to do it again.

The situation shared some eerie parallels to the Mayaguez Incident. Both ships had claimed to be in international waters and been seized by a communist government with a different idea about where their maritime borders were. But so far, the Mayaguez crew had managed to avoid being taken back to the mainland, where they could be imprisoned. The US had one chance to avoid repeating the mistakes of the past, and President Ford decided that they would take it. This time, there would be no negotiations. The US was going in with overwhelming force.

In the early morning of May 13, US patrol planes passed over Poulo Wai, dropping flares to cut through the darkness. Immediately, Cambodian anti-aircraft guns on the island opened fire on the planes. But it was too late, the pilots had spotted the Mayaguez. Knowing that US Marines were probably on their way, the Cambodians ordered Captain Miller to start his ship and sail to another island, Koh Tang. Then the Mayaguez was forced to follow several Cambodian swift boats toward the north of the island. A few hours later, the scream of jet engines cut through the air.

The US airforce had once again spotted the Mayaguez. Fighter planes began to circle the ships and fire their guns at the water in front of the swift boats. The message was clear: if you try to move the Mayaguez again, you die. A plan was drafted to drop US soldiers onto the decks of the ship by helicopter. But on the way, one of the helicopters crashed, tragically killing the men on board. The call was made to hold off the rescue until they had a better idea of how to rescue the crew safely. Meanwhile, the Cambodians were attempting to move the crew to the mainland city of Kampong Som on fishing boats.

The idea was that the US planes would be less likely to try to stop them on the smaller boats. But once again, fighter planes descended on the ships and fired into the water. After a low pass, one of the fighter crews radioed back to tell the officers that they had spotted the crew on the fishing boat. The attacks were called off because of the danger of hitting the crew, and the fishing boats reached the city around 10 AM. But the local commander, afraid of provoking an American attack on the city, refused to take the crew.

The crew was once again moved, this time to the island of Koh Rong Sanloem. The Americans, however, were still convinced that the crew was on Koh Tang. And on May 15, US Marines invaded the island as another force stormed the Mayaguez itself. The Marines had expected light resistance, but the island turned out to have an equal force of Khmer Rouge soldiers armed with anti-aircraft guns and RPGs. An intense firefight erupted on the island as US soldiers fired tear gas canisters onto the Mayaguez and boarded the ship.

During the attack, an RPG round struck one of the US helicopters. It crashed in a ball of fire, killing several military personnel. That was when the Cambodians decided things had gone too far. They immediately issued a statement saying that they had never intended to hold the crew for long and would be releasing them. The crew was returned to a US Navy ship after signing a statement that they had not been mistreated. By that night, all the US military elements were withdrawn from the region. Officially, it was the final battle of the Vietnam war, giving the US one last chance to pull a victory out of a defeat.