Sergeant Peter Lemon: When Marijuana, the Vietnam War, and the Medal of Honor Came Together 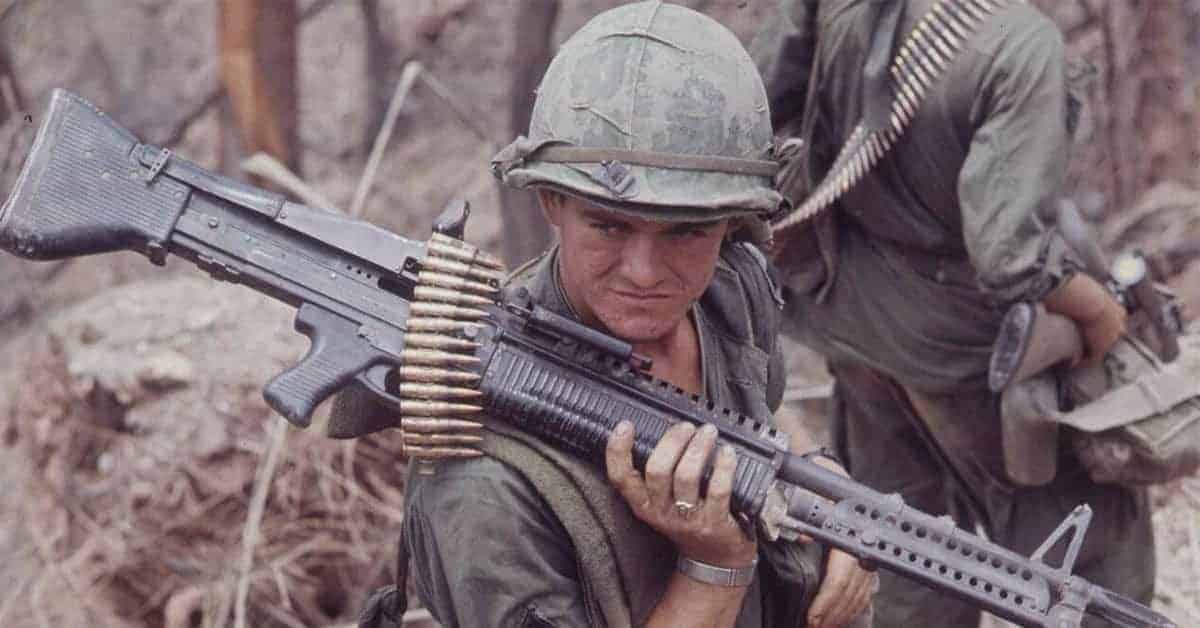 Sergeant Peter Lemon: When Marijuana, the Vietnam War, and the Medal of Honor Came Together

Stories of disillusioned American soldiers are a powerful theme when reflecting on the United States’ war in Vietnam. Movies like Apocalypse Now, Full Metal Jacket, and Platoon, show American GI’s committing war crimes, protesting the war, or abusing drugs. Although many of these stories are based in fact, they do not tell the whole tale.

Numerous disenchanted American soldiers joined the counter-culture that swept through the military’s ranks, but never failed to perform when duty called. Thus, on April 1, 1970, when Sgt. Peter Lemon smoked pot with his fellow soldiers, it was not an unusual occurrence. Lemon’s extraordinary heroism in the nightmarish battle that followed, however, was anything but normal, and he earned the Medal of Honor, the nation’s highest award, for conspicuous gallantryâ€¦ while high.

Born in Ontario, Canada in 1950, Lemon came from a family with a strong military background. During World War II, Lemon’s father and uncle, Charles and Gordon, enlisted in the Royal Canadian Air Force, fighting in the Pacific and Atlantic theaters, whereas their brother John served in the Canadian Army as a military policeman. Lemon’s mother, Geraldine, a Londoner and native Englishwoman, did not serve in the military, rather she was a college-educated physiotherapist who treated wounded soldiers and civilians throughout Nazi Germany’s air assault on Great Britain.

Lemon’s parents met and married in England as the war drew to close. They moved to Toronto, Canada where Charles earned his degree as a mining engineer, before relocating to a small mining community in Alabaster Township, Michigan, in 1952. Although the town boasted only 86 residents at the time, the Lemon’s decision to move to a small town in Northeast Michigan played a profound role in shaping their two-year-old son’s views of patriotism, honor, and duty, as he grew to adulthood.

Although the town was a small enclave in northeastern Michigan, the residents were intensely patriotic. American flags were commonplace, as was anti-Soviet Union sentiment, and Lemon remembers his parents studying and reciting the history of the United States, the Constitution, and the Bill of Rights in their living room. They sang the “Star Spangled Banner” and “God Bless America,” and on many occasions, they discussed what it would be like to be an American. In 1961, the family got their wish, and Lemon recalls that his mother wore her finest dress, his father donned his only suit, and he and his sister wore their â€˜Sunday best’ as they headed to the county courthouse. Standing tall and proud before a judge, the family each raised their right hand as they took the Oath of Allegiance to the United States of America.

Peter’s loyalty to his adopted homeland intensified throughout his teenage years. The burgeoning counter culture and Vietnam War protests were alien to the steadfast sense of patriotism that flourished in Peter’s hometown, and in 1969, he enlisted in the United States Army as an infantryman and Ranger. A fervent patriot, and strong supporter of the fight to contain communism, Lemon’s decision surprised no one who knew him. In less than a year, however, Peter’s faith in his country’s war would be profoundly shaken, and sorely tested.

Boot camp in the Army is a miserable experience, but Peter Lemon loved it. The brutal regimen of calisthenics, formation drills, hand to hand combat and weapon training, clicked for the young man, and Lemon embraced his new military life enthusiastically. He graduated basic training at the top of his class, and repeated his performance in Advanced Infantry Training at Fort Polk, Louisiana. Thus, when Lemon’s Boeing 707 departed the U.S. on July 24, 1969, he looked forward to his Vietnam deployment confidently, even eagerly; secure in the knowledge that he fought for a just and honorable cause.

The reality of the Vietnam War dashed Lemon’s patriotic idealism, and he described his twelve-month tour as “filled with incidents of callousness, desperation, unfriendliness, and escape through drugs.” Later in life, Lemon recalled several brutal experiences that shattered his faith in America’s fight. He witnessed an allied officer execute three enemy soldiers while they attempted to surrender. A fellow soldier killed a hated lieutenant by throwing a hand grenade into the officer’s outdoor toilet. The South Vietnamese America’s soldiers fought and died for, however, ground away at Lemon more than the horrors of war, and he began to agree with the locals who persisted in asking him, “What are you Americans doing here?”

Against the backdrop of this gruesome conflict, and the depressing questions it raised Lemon’s mind, it is unsurprising that he joined his fellow soldiers in relieving the tension through one of Vietnam’s most readily accessible entertainments, marijuana. Life in the military, even in a war zone, is often boring. Days go by when nothing happens, and Lemon frequently passed the time with his friends by partying and smoking pot. He later said, “All the guys were heads. We’d sit around smoking grass and getting stoned and talking about when we’d get to go home.” Thus, when Lemon and his platoon returned to Fire Support Base Illingworth after completing their reconnaissance patrol on the evening of March 31, 1970, he and his friends did what many disenchanted American soldiers did throughout their tour of Vietnam hell, and promptly got stoned before heading to their racks. They’d expected another uneventful night, but the massing soldiers of the North Vietnamese Army (NVA) had other ideas.

Located near the Ho Chi Minh Trail that threaded along the Cambodian border, Fire Support Base Illingworth was an isolated outpost that existed for one purpose: baiting the NVA. In theory, the base was a quickly built, and easily dismantled, lure designed to draw NVA forces out where American air power could annihilate them. Following the NVA’s destruction, the flimsy base was disassembled and rebuilt near other enemy supply routes where the tactic was repeated.

Unfortunately for Fire Support Base Illingworth, and one rather stoned Sgt. Lemon, when the NVA attacked at 2:17 AM on April 1st, 1970, the enemy’s nighttime assault negated America’s overwhelming advantage. Aircraft who attempted to bomb the enemy risked killing United States soldiers, and the 220 Americans stationed at Illingworth suddenly found themselves defending an indefensible base without air support as 400 NVA soldiers swarmed in to attack.

The NVA had not, however, anticipated Sgt. Peter Lemonâ€¦ or the forty tons of eight-inch artillery shells mistakenly delivered to Illingworth the day before their assault.

Ground surveillance radar detected movement just before midnight. The bases’ commander, Lieutenant Colonel Michael John Conrad, responded by ordering his troops to fire into the jungle. He didn’t expect to destroy the enemy, but showing the NVA that surprise was not on their side might deter them from attacking. Cobra gunships strafed the jungle accompanied by gunfire from the base, and the enemy threat melted away. The base remained on alert, but off duty soldiers, such as Sergeant Lemon, were ordered to get back to sleep. Lemon obeyed, but smoked a joint before turning in.

The NVA, however, had not retreated, and at 2:17 AM a hail of rocket fire destroyed Illingworth’s communication tower. Over 400 NVA swarmed out of the jungle as mortar and artillery fire rained across the base, and they breached the American’s defenses almost immediately. Roused from his bed for the second time that night, Sergeant Lemon, a stoned, disillusioned, American solider decided he’d had enough of the enemy’s nonsense, and took matters into his own hands.

Sgt. Lemon staked out a defensive position, and poured gunfire into the enemy with a heavy machine gun until it malfunctioned. Undeterred, Lemon resumed his assault with his rifle, until it malfunctioned too. Many soldiers would flee after their weapons failed, but Lemon opted for a more direct approach, and used hand grenades to fend off the intensified enemy attack. The NVA wounded Lemon with grenades of their own, but his barrage eliminated all but one of the nearby enemy soldiers, and Lemon killed him via hand-to-hand combatâ€¦ just as a massive blast wave interrupted his psychotic counter-attack by killing American and NVA alike.

Nearly fifty years have passed since Fire Support Base Illingworth fought for its life, and nobody has ever discovered who sent the base forty tons of eight-inch artillery shells it could not use. Colonel Conrad protested when the shells arrived the day before, but to no avail. Illingworth was stuck with an enormous pile of unprotected ammunition piled in the center of the base, which, somewhat predictably, exploded at the height of the battle. The blast shredded nearby soldiers who were fighting hand to hand, and in Sergeant Lemon’s case, compounded his injuries by violently slamming him to the ground.

Undaunted by his wounds or the massive explosion, Lemon carried a seriously wounded comrade to an aid station, gathered up more grenades, and, as he returned to his post, was wounded a second time by enemy fire. Lemon realized they were in danger of being overrun, ignored his growing litany of wounds, and charged the enemy for a second time. He threw hand grenades as he closed, fought hand to hand, received a THIRD wound, and forced the enemy to retreat. This, however, did not satisfy Lemon, who secured yet ANOTHER machine gun, stood atop an embankment completely exposed to enemy fire, and continued strafing the enemy until he collapsed from exhaustion.

Sergeant Lemon retired from the Army nearly two years later, but he left the military with a Purple Heart, an Army Commendation Medal, two Air Medals, a clustered Bronze Star, and the Medal of Honor for his heroically stoned actions at Fire Support Base Illingworth.