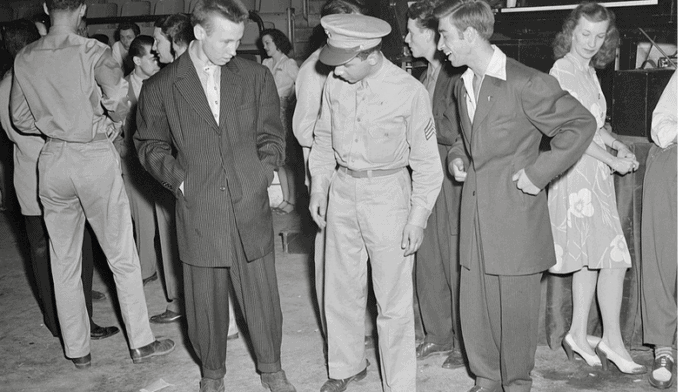 Crime waves, like actual waves in the ocean, come and go. Some crime waves grow from serious and predictable factors, like mixtures of poverty, social injustices, and opportunity coming together at the same time. Others, like the eighteenth century wig-jacking crime wave, or the early twentieth century rioting over straw hats, are harder to explain. Following are forty fascinating things about some of history’s strangest crime waves and most bizarre violent fads.

40. When Fashion Rules Were Literal, and Literally Policed

Rules of fashion – to the extent such rules even still exist – are not taken as seriously today as they were in years and centuries past. At their most extreme, such as in medieval Europe, fashion rules were enshrined in highly restrictive sumptuary laws. “Fashion police” back then was not a figure of speech, and breaking fashion rules was an actual crime. For example, England enacted sumptuary laws during the reign of King Edward III, which dictated what colors, types of clothing, furs, fabrics, and trims, people of various ranks and incomes were allowed to wear. Violators were subject to criminal and civil penalties.

The idea was to reinforce social hierarchies, and prevent people from “dressing above their station”. The fashion rules were specifically targeted at commoners, especially the emerging class of rich commoner merchants and businessmen who were as wealthy and sometimes wealthier than aristocrats. Eventually, governments stopped policing fashion, and left that to public opinion. Public opinion being what it is, fashion rules were sometimes enforced by violent mobs, like the time when riots erupted in American cities over the choice of hats.