The Pazzi Conspiracy: Murder at High Mass in Renaissance Italy 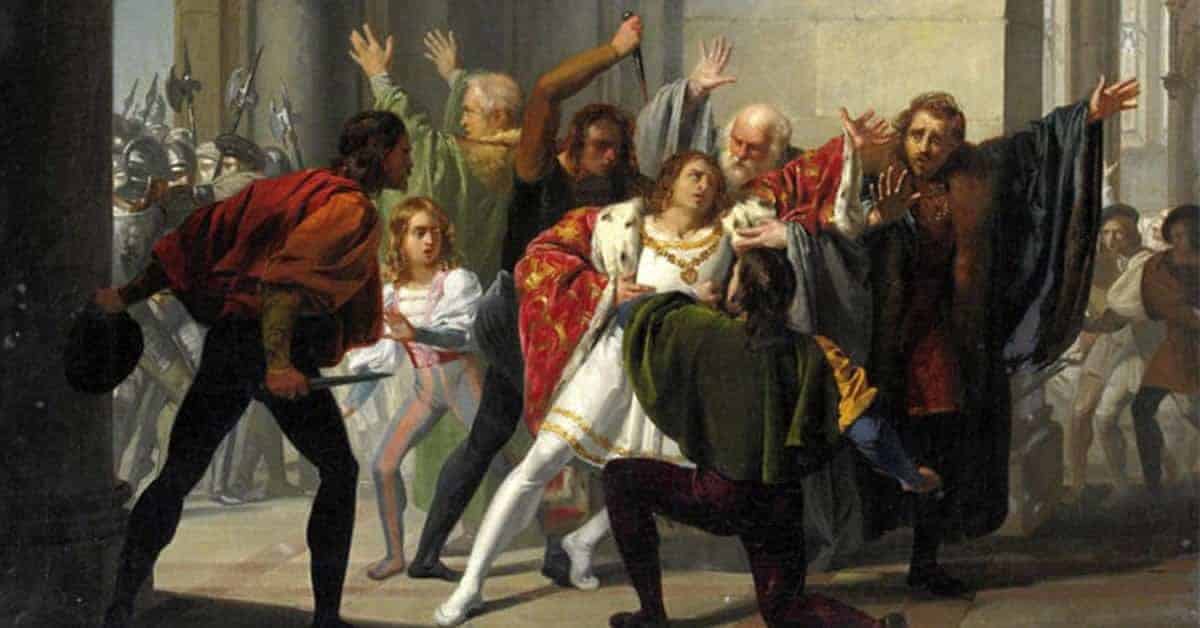 The Pazzi Conspiracy: Murder at High Mass in Renaissance Italy

Florence is world-famous for its beauty. As “the Cradle of the Renaissance“, it’s been home to some of the greatest artists in western history, working under the patronage of medieval Europe’s most powerful banking families. They’ve left us an enviable artistic and architectural legacy. Aside from the countless artworks—Michelangelo’s “David”, Botticelli’s “Venus”—in the city of Florence itself the Duomo, the Palazzo Vecchio, and the Ponte Vecchio all pay physical testimony to the power and prestige of this once unrivaled city-state. But Florence’s preened façade can be deceptive, for beneath it lies an ugly, bloody history.

It’s Easter Sunday 1478, and Lorenzo de’ Medici is making the short journey from his family palace to the Basilica of Santa Maria del Fiore—known today as the Duomo—to celebrate High Mass. Lorenzo is an immensely powerful man. Charming, charismatic, and fiercely intelligent, he’s the head of the Medici family, a dynasty that’s enjoyed a remarkable rise in power and influence since the early 15th century to become Europe’s leading bankers.

But the Medici is much more than just bankers. They finance kings and popes (and will go on to produce three popes of their own) and patronize some of history’s greatest artistic geniuses, including Leonardo da Vinci, Michelangelo, Donatello, and—the less famous of the Ninja Turtles—Raphael. Politically, they’re also the de facto ruler of Florence despite the fact that, at least on the surface, the city-state is a democratic republic governed by representatives from a number of powerful families.

Lorenzo isn’t walking alone; doing so would be unthinkable for a man of his standing. With him is his handsome brother, Giuliano, his friend Bernardo Baroncelli and his contemporary and political rival, Francesco de’ Pazzi. Francesco comes from another prestigious family. The Pazzi are bankers, rivals to the Medici, one of the big political families waiting in the wings for their opportunity to loosen the Medici’s iron grip on the city.

They’ve already struck the first blow, taking over as financers to Pope Sixtus IV who has no love lost for the Medici. In fact, he’s recently written to the Pazzi family and their allies the Salviati, telling them that the demise of the Medici would be most beneficial to the papacy and giving his backing to a plot to remove Lorenzo and Giuliano “so long as there be no killing.”

Giuliano is struggling to keep up with his brother, hobbling behind him and his entourage on account of a recent, painful bout of sciatica. Francesco hangs back to wait for him, and as he catches up Francesco playfully droops his arm around him, giving his torso a squeeze and mocking him gently about his limp. To anybody looking on this looks innocent enough: banter between a couple of young aristocrats on their way to church. The reality is far more sinister; Francesco is checking to make sure Giuliano isn’t wearing any armor beneath his opulent garments.

Leaving the thousands of cheering Florentines outside in the Italian sun, Lorenzo and his group process into the cool, dark interior of the church. Exhausted from the exertion of the walk, Giuliano hangs back by the door. Lorenzo meanwhile makes his way up towards the High Altar to stand beside two monks, who Giuliano recognizes as tutors to the Pazzi family. Everyone stands in solemn reverence as the choir finish chanting, waiting for the service to begin in earnest.

As the priest raises the Host before the High Altar, Francesco and Bernardo draw their daggers and dash at Giuliano. Bernardo drives the blade straight into his skull, killing him instantly, while Francesco stabs and slashes frenziedly at his lifeless body. He’s more ferocious than he is accurate, however, and amongst the blood and confusion, Francesco manages to drive the blade through his own thigh.

While Lorenzo looks on in horror, the two monks standing beside him, Antonio Maffei and Stefano da Bagnone, reach under their habits and draw daggers of their own. They try to stab Lorenzo in the back, but he turns around at the last minute and they manage only a glance to his neck. Using his cloak as a shield, Lorenzo draws his own sword, and his murderous rage and famed reputation as a swordsman cause his assailants to back away while a retinue forms around him.

Lorenzo’s companions grab their leader and begin pulling him towards the heavy bronze door of the sacristy and the safety beyond. Sensing the opportunity slipping away, Bernardo runs towards Lorenzo and lunges at him. But Lorenzo’s friend throws himself in the way, taking Bernardo’s sword through his stomach, as Lorenzo is dragged screaming into the sacristy. Its doors are shut and slowly the conspirators begin to trickle out of the church. After a few moments, Lorenzo follows, returning to the safety of his palace surrounded by his supporters.

Meanwhile, down the road at the government headquarters (the signoria in the Palazzo Vecchio) the second part of the plot is being hatched. Francesco Salviati, the Archbishop of Pisa and nephew of Pope Sixtus IV, has asked for a meeting with Florence’s figurehead ruler, the gonfaloniere Cesare Petrucci, in which he wants to deliver a message from the pope. With him are several rough-looking figures, wearing armor and armed to the teeth; not the kind of company you’d expect an archbishop to keep.

That’s because they’re not in fact clerics, but hired mercenaries from Perugia. And Salviati has no intention of delivering a message from the pope but intends to set his mercenaries on Petrucci, killing him, and securing the signoria. The gonfaloniere is just finishing his lunch, so Salviati and his companions are led to separate rooms and asked to wait. Noise and commotion from the piazza below alert Petrucci to the fact that something’s not right, and when he finally meets with Salviati he notices that the Archbishop’s hand is shaking and he’s stammering incomprehensibly.

Unable to take the pressure, Salviati makes a dash for the door and screams for his mercenaries. But they are locked away in the Chancellery, and despite their best efforts to beat down the heavy wooden door, they will remain there until the plot is discovered and they’re butchered by Medici supporters. One of Salviati’s companions draws a knife and attacks the gonfaloniere, but he’s easily overpowered and disarmed by Petrucci who’s armed with a roasting spit. Guards then come and lead the gonfaloniere up to the safety of the tower where they ring a bell, alerting the city to the conspiracy.

In the piazza below, Jacopo de’ Pazzi, head of the family, has taken up position with a small army. He shouts, “Popolo e liberta!” (People and freedom!)—the traditional call to arms against tyrannical government in an attempt to get the mob onside. But his cry falls on deaf ears. More effective is another speech that Lorenzo de’ Medici is giving from his palace balcony across the city. He confirms that he’s been attacked and his brother murdered, but urges for calm, pleading with the mob not to take justice into their own hands. The mob—as mobs tend to do—end up doing the exact opposite.

There’s no delay in dealing with the conspirators. Francesco is hunted down and dragged, still bleeding from his self-inflicted wound, from his bed to the Signoria where he’s stripped naked, a noose is tied around his neck, and he’s thrown from the window, left swinging above the jeering mob below. Next is Salviati. But the fall doesn’t kill him. Wild-eyed and writhing he spends his desperate final moments trying to swing himself over to the dangling corpse of Francesco de’ Pazzi, frantically biting into it in a hopeless attempt to get purchase. Bernardo Baroncelli will follow soon after.

Jacopo de’ Pazzi doesn’t stick around to watch his nephew sway from the palace’s window. After failing to win over the mob he realizes the battle is lost and makes a break for the city gate. He manages to escape, but just a few days into his self-imposed exile he’s recognized, arrested and brought back to Florence. After being tortured, he’s executed in the same manner as the other conspirators: stripped naked and hanged from the window. What happened to his body post mortem, however, differed drastically.

Initially interred in the Basilica of Santa Croce, his corpse is dug up by Medici supporters, intent on getting revenge and bringing definition to the term “overkill”. They drag his body through the city, bruising it beyond recognition on its cobbled streets, before cutting his head off and using it as a doorknocker at the Pazzi family’s palace. Eventually, it’s thrown into the Arno where it’s left to decompose in the river’s filthy waters.

But this isn’t the end. Local children then fish Jacopo’s corpse out, sling it over the branch of a willow tree and flog it before finally throwing it (or, by this stage what was left of it) back into the river. Though in less of a bloody and brutal way, the Pazzi family suffered the same fate as its patriarch’s corpse: annihilation. Among the 80 or so people hunted down and killed in the aftermath of the conspiracy, many were from the Pazzi family. Those who aren’t killed flee for their lives, banished forever from their city of Florence.

The failure of the Pazzi Conspiracy had deeper ramifications for the Cradle of the Renaissance. The Papacy’s backing of the Pazzi family would ultimately lead to a war between the Medici and the Popes, almost crippling Florence financially. But, ironically for the conspirators, what was meant to bring about the end of the Medici ended up ensuring more than just their survival but their flourishing under Lorenzo and his successors. For not only had they managed to rid themselves of their most dangerous enemies, but they’d also proven their popularity as the people of Florence, when the choice came, had chosen their ruler.