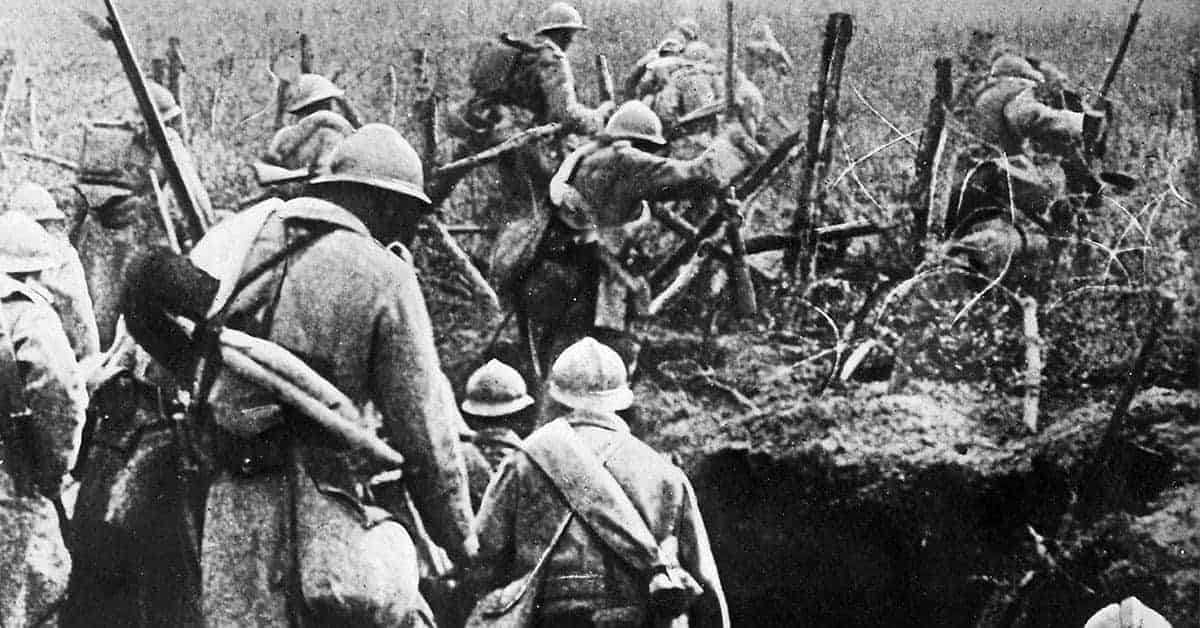 Falkenhayn knew that an attack on Verdun would result in French troops being drawn in from all over the Western Front. He planned to unleash attrition warfare on a scale that would “bleed France white.” To have his plan approved by the Kaiser, Falkenhayn proposed that the Kaiser’s eldest son, Crown Prince Wilhelm, should take command of the main attack.

Wilhelm initially planned to attack Verdun from both sides of the surrounding Meuse River, but this was vetoed by Falkenhayn as he feared heavy losses using that strategy. Instead, Falkenhayn ordered the attack to be confined to the eastern bank of the Meuse.

The attack on Verdun was set for February 12, 1916, but bad weather resulted in it being postponed for several days. In the meantime, Joffre received intelligence of the impending attack and immediately began deploying reinforcements to the French Second Army. Colonel Driant ordered his troops to begin work on improving the trench systems at Verdun in preparation for the battle.

The opening phase of Operation Gericht began at 7.15 a.m. on February 21, 1916, with the heaviest artillery concentration to date of the First World War. Over 1,600 German artillery pieces were estimated to have fired approximately 100,000 shells per hour along the eight-mile front. In a process known as counter-battery fire, shells and phosgene gas canisters were fired at French artillery positions, which rendered them ineffective.

The first German infantry attack began at 4.45 p.m., initially led by teams of scouts who surveyed the damage caused by the opening artillery barrage.

When the scouts returned with information regarding where French defenses remained unbreached, Wilhelm decided to withdraw his forward infantry and subsequently began targeting these positions with further artillery fire. The cessation of the artillery bombardment opened a window of opportunity for the French soldiers to reposition themselves so that they could effectively enfilade the advancing German troops across the Meuse.

At the end of the first day of the battle, the assault on Verdun had proved far less successful than Wilhelm had planned. Only the French front line trenches had been captured. The following day, Driant and his two battalions of men who were badly outnumbered, fought bravely to hold back the German advance.

When their ammunition ran out, they fought with their bayonets. Driant was killed by a shell but his heroism had “slowed the German assault and set the model for French service at Verdun.”

The entire French line was placed in jeopardy when Fort Douaumont, reputed to be one of the strongest forts in the world, fell into German hands on the fifth day of the battle. A small group of soldiers of the German 24th Brandenburg Infantry Regiment entered Douaumont by an unguarded passageway catching the garrison of 57 second-line territorials completely by surprise. The fort was surrendered without a single shot being fired.

On the same day, Joffre sent his second-in-command, Edouard Noël de Castelnau to Verdun to assess the situation. Castelnau decided to replace General Herr with a more defensive-minded general, Henri-Philippe Pétain. Pétain had begun the war as a front-line infantry colonel and had gained a reputation among ordinary soldiers of being a General who used sound reasoning and one who cared for his soldier’s wellbeing. It proved to be a masterstroke for the French Army.

Reacting to the dire need for supplies at Verdun, Pétain made use of a narrow road, just six meters wide, which after the war would become known as ‘La Voie Sacree‘ (the ‘Sacred Way’). It enabled 3,500 trucks, driving with dimmed headlights only a few meters apart, to transport in much-needed supplies. It was also used to withdraw the wounded or units being relieved from the front. At its peak, this vital supply line brought in 90,000 men as well as 50,000 tons of supplies each week.

Pétain also introduced the Noria system at Verdun, where divisions were rotated in and out of the front lines every 15 days or when they had lost one-third of their personnel. Pétain’s Noria system combined with the duration of the battle itself made Verdun “an exceptionally generalized experience throughout the French army.” Of the eighty-five divisions of the French army, seventy served at Verdun at some point in the battle. Forty-three divisions were committed once, twenty-three twice, and seven three times or more.

Although Petain knew that defending Verdun would likely result in large numbers of casualties for the French, he intended to maximize the casualties on the German side. He personally took command of the French artillery and reorganized its use in battle so that it became a more effective defensive weapon.

German attacks and French counterattacks continued over the following months which resulted in huge losses on both sides, with very little to show for it. In May 1916, Petain was promoted and replaced at Verdun by the more offensively minded Robert Nivelle. Although Petain was credited with the famous statement “Ils ne passeront pas!” (They shall not pass!), it was, in fact, Nivelle who said it. Nivelle was undoubtedly aided by German troops being withdrawn from Verdun when the Battle of the Somme began on July 1, and by the withdrawal of further troops to the Eastern Front to halt a Russian offensive.

Due to the heavy losses and lack of ground gained by the Germans, Falkenhayn was relieved of his post and sent to the Transylvanian Front to command the German Ninth Army. He was replaced at Verdun by Paul von Hindenburg, who later went on to become German President. On the French side, General Charles Mangin was appointed to assist Nivelle. Mangin successfully recaptured Fort Douaumont on October 24, and then Fort Vaux on November 2. Further ground was retaken before Hindenburg realized the futility of continuing the battle any longer. On December 18, 1916, he decided to fully withdraw German troops from Verdun.

While Falkenhayn’s attempt to bleed France white did result in large casualties on the French side, it similarly resulted in huge losses for the German Army. Total casualties neared three-quarters of a million following the ten-month battle, which was the longest of the First World War. Differing figures have been approximated by historians, but the most common figures estimate approximately 378,000 French and 337,000 German casualties.

Imperial War Museum – What Was The Battle Of Verdun?

WWI: Remembering the US Volunteers Who Saved French Lives at Verdun