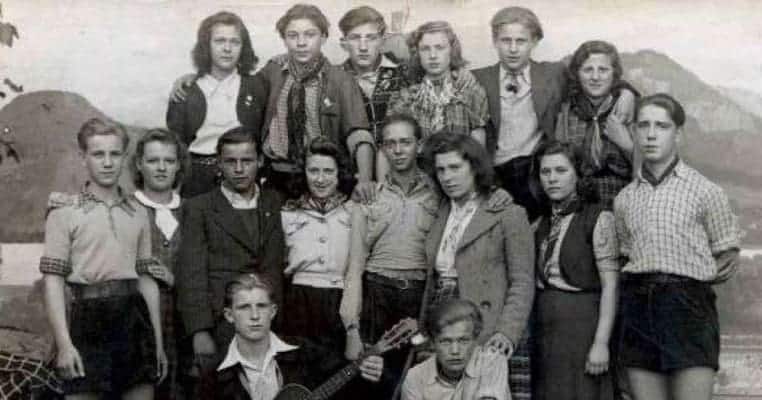 While the boys of the Hitler Youth were getting indoctrinated into becoming good Nazis – and prepared for becoming good soldiers – members of the League of German Girls were trained to become good Nazi wives and mothers. Leaders of the female branch were even directed to recruit girls of good genetic stock, as potential breeding partners for SS and Nazi officials in accordance with a selective breeding program known as Lebensborn. After they were recruited, matched with breeding partners, and impregnated, the Lebensborn program helped the girls during their pregnancy, affording them facilities in which to give birth and receive prenatal and postnatal care.

Because the Hitler Youth and the League of German Girls were deemed Aryan organization, premarital sex between their members was often encouraged by Nazi officials, in the hopes of increasing the stock of Aryan babies. Mixed gender gatherings of the youth organizations, such as the Nuremberg Rallies, often produced bumper crops of teen pregnancies, and the most famous of those, the 1936 Nuremberg Rally, led to an estimated 900 pregnancies. It is unclear how many of those pregnancies were the result of consensual sex between Nazi teens, and how many the result of molestation by adult Nazis, but the number of pregnancies dismayed many. Traditional conservative elements still held some sway in the Nazi party at the time, and the Lebensborn crowd had not yet gained an ascendancy, so a temporary stir and kerfuffle ensued. In the end, many of the pregnancies were terminated by abortions, on orders from the Party.

However, some German youngsters refused to go along with the Nazi program. While resisting the pressure to join the Hitler Youth was difficult and often hazardous, some brave youth refused to simply go along. Best known among those were the so-called Edelweiss Pirates, a loose association of youth movements in western Germany that developed in opposition to the regimentation of the Hitler Youth. They took their name from the edelweiss – a hardy white mountain flower, that grows in high altitudes.

Like many youth cultures across the ages, the Edelweiss Pirates set themselves apart with a distinctive style of dress that became common among their members. They did not all use the title Edelweiss Pirates – the branch in Cologne, for example, went by “Navajos” – but they shared some common traits. Foremost among them was encouraging free thought, and eschewing the strict gender segregation of the Hitler Youth and League of German Girls, in favor of co-ed activities.

Edelweiss Pirates also organized camping and hiking trips, during which they often had the freedom, while temporarily away from snoops and snitches, to engage in prohibited activities, such as singing or listening to music deemed “degenerate” by the Nazis, like jazz and the blues. They were also able to freely express themselves, and openly discuss topics and voice opinions that would have gotten them in trouble with the authorities had they been overheard by informants back in the cities.

The Nazis initially dismissed the Edelweiss Pirates as minor irritants and teenaged delinquents going through a phase. Attitudes hardened once WWII began, when the authorities blamed the Edelweiss Pirates for collecting anti-Nazi propaganda leaflets dropped by British bombers early in the war, and stuffing them into mailboxes. That was viewed as subversion during wartime, and treason. In 1943, for example, authorities in Dusseldorf complained to the Gestapo that the local Edelweiss “gang” was a bad influence on other youth, as well as on young soldiers, who hung out with them while on leave. The report noted: “These adolescents, aged between 12 and 17, hang around late in the evening with musical instruments and young females. Since this riff raff is in large part outside the Hitler Youth and adopts a hostile attitude towards the organization, they represent a danger to other young people.”

Nonetheless, local authorities were relatively lenient with the Edelweiss, when compared to how they dealt with adult subversives. For example, penalties for the “delinquents”, who often kept their hair long and their appearance bohemian to set themselves apart from the militarized regimentation all around them, were often limited to a stern talking to, then shaving their heads. That was not enough for SS head honcho, Heinrich Himmler, who wanted an example made of youths who failed to show complete loyalty, and deemed any half measures when dealing with them to be unacceptable.

Writing in 1942 to his deputy, Reinhard Heydrich, Himmler wanted the Edelweiss to do a 2 or 3 year stint in concentration camps: “There the youth should first be given thrashings and then put through the severest drill and set to work. It must be made clear that they will never be allowed to go back to their studies. We must investigate how much encouragement they have had from their parents. If they have encouraged them, then they should also be put into a concentration camp and (have) their property confiscated“.

By 1944, with Third Reich clearly circling the drain, Himmler ordered an even more brutal crackdown. In November of that year, thirteen youths were hanged in public in Cologne, many of them active or former Edelweiss Pirates. The repression failed to break the youth coalition, however, which continued as a defiant subculture, rejecting the norms of Nazi society, until the “Thousand Year Reich” went down to defeat after a mere twelve years’ existence.

After the war, some factions of the Edelweiss Pirates attempted to work with the Allied occupation authorities, and their advances were welcomed, particularly by the communists in the Soviet occupied zone. However, most of the rank and file membership, true to their ethos, turned their backs on the attempt to politicize their movement. Having risked their lives to evade the regimentation of the Nazis, they were not eager to embrace regimentation under the communists. As a result, those who remained in what became communist East Germany ended up as dissidents and social outcasts, with many of them doing long stints in prison. In an unfortunate irony, many Edelweiss Pirates in West Germany ended up as reactionaries, even less reconciled to defeat than the Nazis, and became notorious for attacking Germans – particularly women – known to have been friendly or intimate with occupation soldiers.