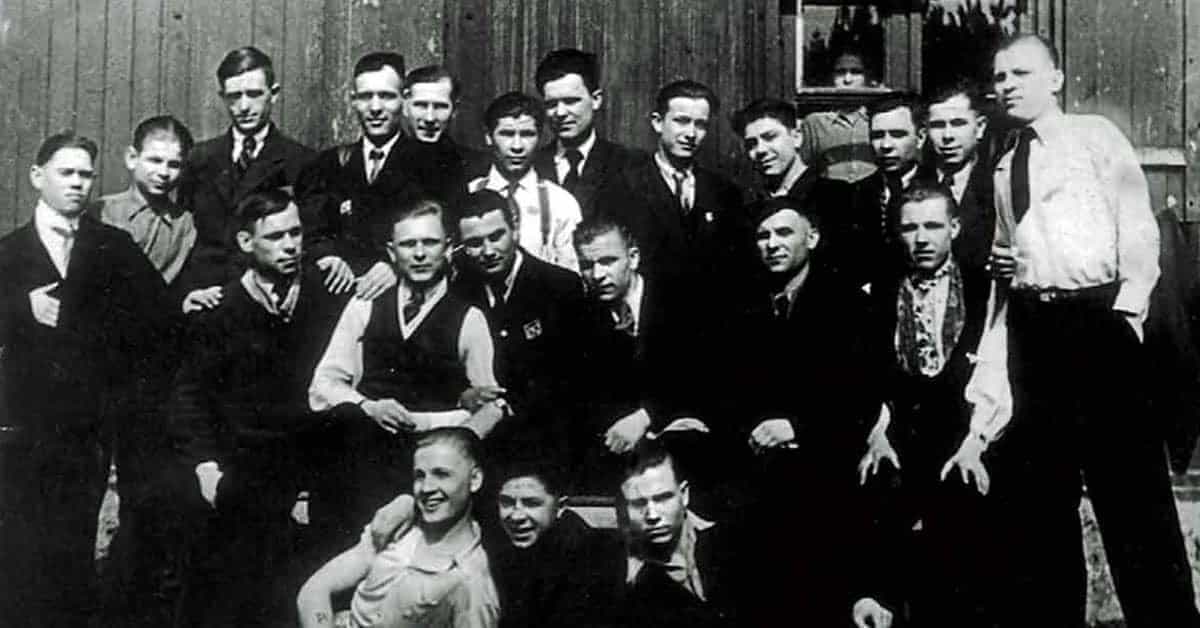 From an early age Hans Steinbrück struggled to find a place for himself within German society. Born in 1921 and orphaned by the age of five, he did not have any family to look to for guidance. At the age of sixteen Steinbrück ran away from his orphanage and took a job as a sailor. In his two years at sea he saw much of the world – a little too much, perhaps, as he would contract malaria while in a stop off in Africa.

When the Second World War broke out in September 1939 the shipping company that employed Steinbrück let him go. For a time he manage to maintain his maritime lifestyle by working the docks in Düsseldorf, but in 1941 he was drafted into the military to serve in a flak battery. His military career lasted only a month before he had a malaria attack and fell from his flak gun, injuring his head. Apparently unfit for service, the military released him out into a world at war with no source of income.

He was so desperate for work that he even attempted to secure a position as a Gestapo officer in 1942, but the Gestapo did not hire people off the street. Thereafter he would try to get a break on his rent by posing as a Gestapo officer while applying for a Düsseldorf apartment. Suspicious, the landlord reported him to the real Gestapo, and they arrested Steinbrück for impersonating an officer and sent him to the Buchenwald concentration camp.

Within the concentration camp system Steinbrück became one amongst a mass of downtrodden individuals exploited by the Nazi regime for their labor. At the time the city of Cologne had recently been devastated by the first thousand bomber raid of the war, so a satellite camp of Buchenwald was established there employing prisoners to clear the rubble. Steinbrück was amongst the first 300 inmates sent to Cologne for this purpose.

In the spring of 1943 the bombing of Cologne intensified during the Battle of the Ruhr. The city was soon littered with unexploded ordinance and bombs on time-delay fuses. Steinbrück was among the concentration camp prisoners charged with the dangerous job of defusing these bombs. He proved to be exceptionally capable in this capacity, personally defusing 900 bombs, and earning a good deal of local notoriety and the nickname “Bomber Hans.” He knew, though, that the job would one day take his life, so in October 1943 he escaped, becoming a fugitive.

Luckily for Steinbrück he knew a young woman in Cologne, Cäcilie Serve, who he had previously had a romantic relationship with. She agreed to take him in at her apartment on Schönstein Street. For six months Steinbrück resided with Cäcilie, living off of her state support payments. While living on Schönstein Street he also developed a close relationship with a group of boys who lived in the area, members of an underground youth movement set up in opposition to the Hitler Youth called the Edelweiss Pirates. The boys idolized Steinbrück, who regaled them with stories of defusing bombs.

This happy interim period ended for Steinbrück in April 1944, when another air raid destroyed the apartment that he and Cäcilie had been living in. Steinbrück improvised a shelter for Cäcilie and himself in the backyard of the destroyed apartment, building it with tools and supplies that he had taken from other ruined buildings. This would prove a watershed moment for Steinbrück. He had been living outside the law of the Nazi state for some time, but now he would begin to support himself by stealing.

Cologne in the late summer of 1944 was already a city in ruins. Most of its population had been evacuated as the Allies broke out from Normandy in August and rapidly drove for the German border. Cologne would become something of a supply depot for the German military as they organized their defense of the Reich’s western border. For Steinbrück this city full of supplies but devoid of people provided an incredible opportunity. He would connect with several other fugitive men, deserters and the like, and begin a spree of capers.

It all started innocently enough. At first Steinbrück and his crew attempted to earn a living doing rebuilding work for other Germans who had remained in Cologne. They supplied this operation by first by stealing tools, then by stealing cement, and finally by stealing an entire cement truck. Soon, though, they dropped the pretext of doing work entirely and began raiding the military supply dumps, stocking up on weapons. On the first day of September they carried out their greatest heist, stealing 2,600 pounds of butter. It had a street value of 123,000 Reichsmarks, as much as a common laborer would make in two lifetimes.

Steinbrück’s career as a black marketer came to an end on September 29, 1944, when a military patrol discovered his hideout and weapons cache in the shelter behind the apartment on Schönstein Street. Steinbrück had been there when the patrol arrived but managed to escape out the back window. Cäcilie was not so lucky. The patrol detained her in the shelter, using her as bait in the hopes that some other members of the gang would return. They would not have to wait long.

By coincidence, the night before the raid on Schönstein Street another pair of German living outside the law in the rubble of Cologne, the deserter Roland Lorent and his sixteen-year-old sidekick Hans, had caused some trouble of their own. The two of them had organized the murder of a local Nazi Party boss. While Lorent and Steinbrück did not know each other, the Gestapo suspected that there was a connection between the murder and the hideout they had just discovered on Schönstein Street.

On the night of September 29 Lorent and Hans were at a local bar celebrating their successful assassination when a friend of theirs, who insisted everyone just call him “Edi,” asked if the two of them would be willing to take in a fugitive. Already drunk and celebrating, the two agreed, and the next day “Edi” brought the fugitive to their hideout. It was Steinbrück. It didn’t take long for Steinbrück and Lorent to become close, and to seal the bond the two of stole a car and some weapons together that night.

After the two established trust in the shared heist, Steinbrück told Lorent about how the Gestapo was holding Cäcilie captive at Schönstein Street and Lorent revealed his recent assassination. Seeing an opportunity, Steinbrück proposed that Lorent and Hans should come with him to try and free Cäcilie, promising that he would have the chance to kill more Nazis. They planned the “Nazi hunt” for the next day, recruiting some of the Edelweiss Pirate boys to help them.

On the night of October 1, 1944, the band set out in two cars loaded down with weapons to rescue Cäcilie. The plan was that Steinbrück would take his car around the back while Hans would drive the other car up to the front with Lorent laying on the front hood ready to shoot, but the whole thing went bad from the beginning. When they arrived at the apartment Lorent spotted a police officer and opened fire, hitting him in the knee. The first shot was supposed to be the signal for the attack, but Hans panicked and sped away, crashing into Steinbrück’s car.

The collision stalled Steinbrück’s car, forcing Steinbrück to leave the vehicle to try and fix it while the boys in Hans’s car fired out the windows at any figures that approached. Once Steinbrück got his car running again the whole group fled, and the boys went home. Steinbrück and Lorent were not finished though. They returned on foot, but as they approached Schönstein Street they encountered an SA man on a bicycle. Lorent pointed his gun and said “hands up!” The SA man stopped his bike, whereupon Steinbrück walked up to him and shot him in the head.

Undeterred, the duo pressed on, taking a position overlooking the apartment. When they got there they observed a patrol of Hitler Youth near the building, and opened fire into the crowd killing one. It was all for nothing, though. The Gestapo had already moved Cäcilie so the rescue operation would be a failure. Enraged, Steinbrück concocted a plan to blow up the Cologne Gestapo headquarters. He would need explosives, but by now he was an expert in acquiring weapons in the ruins.

Their plot to steal explosives was foiled, though, by an attentive guard at the weapons dump. Now the Gestapo would begin to strike back. Lorent was arrested on October 3, 1944, and within a week the Gestapo would have most of the rest of the group including Steinbrück and the Edelweiss Pirate boys. After a month of brutal interrogation thirteen of the participants in Steinbrück’s gang, the youngest only sixteen years old, were hung from a specially constructed gallows on Schönstein Street.