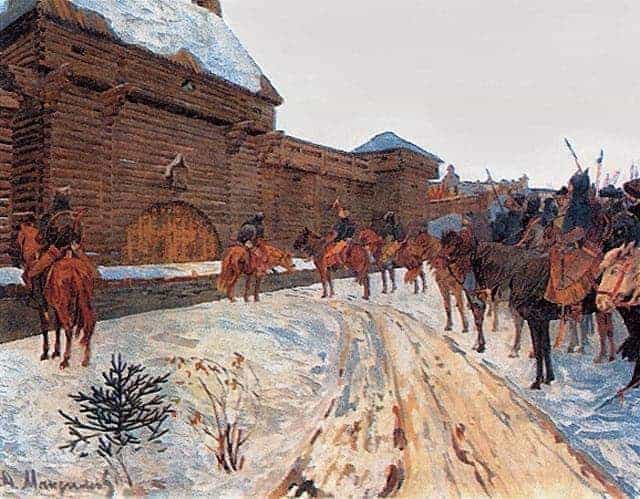 Following the victory of the British Empire over the French in North America, many Native Americans viewed with growing alarm the encroachment of colonial settlers on what they viewed as their lands. Pontiac was an Ottawa war chief who built a fragile coalition of tribes along the edges of the Ohio Country and the area of the Great Lakes. Many of these tribes were historical enemies, creating an uneasy alliance.

The American colonists and settlers were officially proscribed from settlement west of the Allegheny mountains, but growing numbers ignored the King’s edicts and as the tribes felt the growing pressure they responded with open warfare. Lord Jeffrey Amherst commanded the King’s troops in the region and sought a quick solution to the problem.

Serving under Lord Amherst was one Colonel Henry Bouquet, a veteran of the French and Indian War who had served in the Swiss Guards in Europe before being acquired for British service as a mercenary. Bouquet was familiar with the events surrounding Fort William Henry and its aftermath. In response to a request from Amherst, who was also familiar with the earlier events, Bouquet suggested that an infection of smallpox among the “…Indians by means of blankets which may fall in their hands…” was not only possible but desirable.

A parley was arranged under the guise of preventing conflict and the opportunity was taken to present the arriving chiefs with “gifts”, including smallpox-infected blankets and other clothing and leather items. These the chiefs took home to their villages.

Modern-day estimates claim nearly a half-million Native Americans died of smallpox during Pontiac’s Rebellion – the number could be much higher – reducing Pontiac’s forces in the field and devastating the non-combatants in their villages. In the end, concerned with the cost of protecting the frontier, the British issued the Royal Proclamation which largely closed the Ohio country to settlement, and became a major contributor to the causes of the American Revolution.