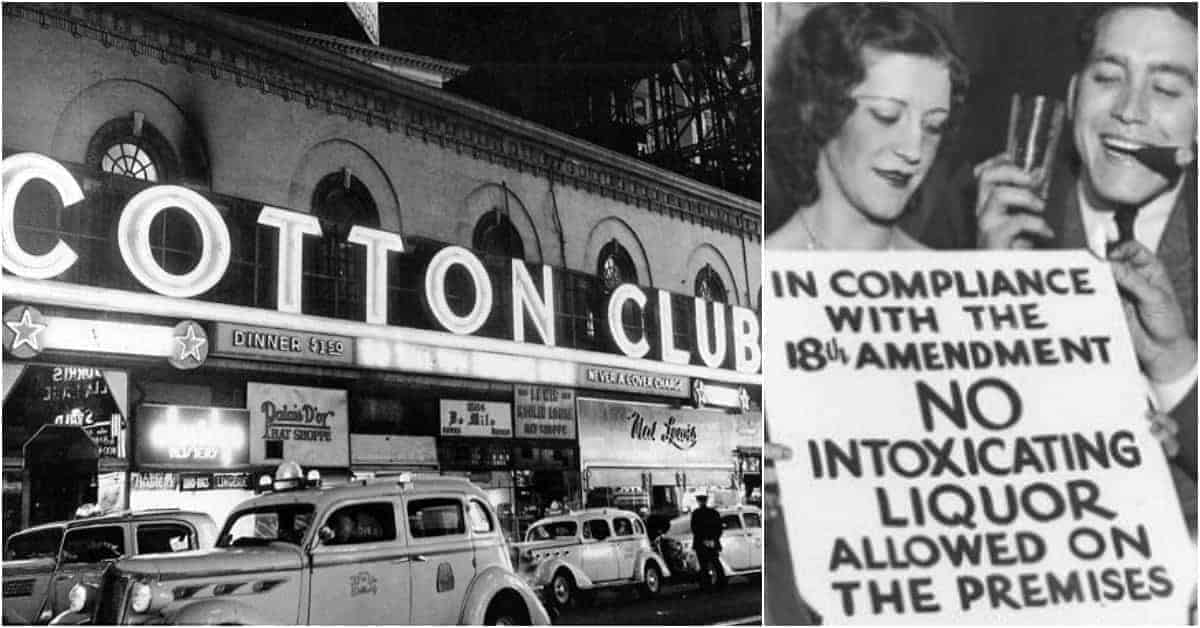 Chicago’s Green Mill holds a distinction which gives it a special panache among Prohibition-era illegal bars. It was one of Al Capone’s favorite places to spend an evening. Capone operated breweries all over the city and smuggled imported liquor from Canada, as well as operating several distilleries where low-quality “bathtub gin” was produced. But his preferred beverage was Templeton Rye Whiskey, which the Green Mill kept on hand for its most notorious customer.

As Prohibition wore on Capone’s men tried to muscle in on the Green Mill, including attacking a famous comedian and entertainer of the day, Joe Lewis. Lewis refused to perform at the Green Mill and for his temerity, he had his throat cut by a Capone henchman, although he survived the attack.

By the mid-1920s Capone’s rivals throughout Chicago made his whereabouts of interest whenever he was away from his headquarters and thus vulnerable. Beneath the Green Mill a series of tunnels were built, exiting to various points in the neighborhood. The tunnels provided several uses for the bootleggers; illegal liquor and beer could be moved in unseen by nosy law enforcement personnel on the street while bootleggers and their enforcers and cronies could exit the premises without using the street doors.

This was particularly useful in the event of a raid, incoming officers would find the illegal liquor – which was replaceable – but nobody to charge with its possession. Capone preferred a table which was near one end of the bar, through which was a hidden door leading to the tunnels and eventually to the street, where a waiting car and driver would whisk him out of harm’s way. Before he was forced to flee in such a less than dignified fashion Capone was often able to enjoy the entertainment offered by performers such as Al Jolson and Billie Holliday.

After Prohibition, the Green Mill suffered lean times and although it remained open it was largely known as a dive before a resurgence began with new ownership in the 1980s.

The good people of Michigan were given a head start over the rest of the country imposing legally enforced prohibition of alcohol on their fellow citizens. Prohibition in Michigan began in 1917. Given its proximity to Canada, especially at Detroit where the bars, breweries, and distilleries were just across the river, it was always an iffy proposition enforcing complete temperance. Rival gangs quickly positioned themselves for dominance in the bootlegging trade, and the notorious group known as the Purple Gang achieved prominence.

The Purple Gang became strong enough to not only control the illegal market in Detroit but to occupy the role as a prime supplier of smuggled liquor to Al Capone’s Chicago Gang. Some scholars believe that up to 75% of all the illegal liquor smuggled into the United States during Prohibition crossed the Detroit River under the control of the Purple Gang.

All that activity was hard work, and even smugglers needed a place to unwind and perhaps consume some of their illicit products. Little Harry’s was a speakeasy where members of the Purple Gang could relax. It was located, according to recent excavations and research, at 624 3rd Street in Detroit, today the site of Tommy’s Bar.

Little Harry’s was in the basement of the building. It could be reached through an underground tunnel which may or may not have traversed a neighboring building. From there a staircase led below ground to a large room richly paneled in wood. Upon reaching the room entry was allowed after the presentation of a guest card; no card no entry.

The name “Little Harry’s” likely came from a man by the name of Harry Weitzman, who became the owner of the business above the bar in 1927 or thereabouts. That business remained open during Prohibition by selling soft drinks and avoiding any conflict with the law while keeping an eye on the less savory transactions occurring below. Weitzman had several business dealings with the Purple Gang before, during, and after Prohibition, and may have been placed in an ownership position of the legitimate business as a front by members of the Gang. Access to the false room below Tommy’s Bar is now bricked in, but portions of the tunnel remain as a reminder of the days when thirsty scofflaws went downstairs in search of an illegal libation.

The Rosslyn Hotel opened in 1914 at 5th and Main Streets in Los Angeles. Despite its 800 rooms, it was frequently full and in 1923, with Prohibition in full force, a 275 room annex was opened on the other side of 5th Street, connected to the older building by a subterranean corridor. The corridor split a basement which contained barber shops, shoeshine stands and eventually a speakeasy known as the Monterey Room.

In the style upper-classes lounges of the day, a hat check room and reception desk greeted the visitor to the Monterey Room. Speakeasies were so common in Los Angeles that one newspaper of the day estimated there were more than 400 illegal bars operating in the city in 1919. Remaining hidden was of little concern.

Because of its distance to Canada and the professional fervor of government agents inspecting cargoes on ships arriving in the port at San Pedro, California speakeasies dispensed liquor of poorer quality than that of their northern brethren. Coupled with the new behavior of women accompanying men to bars – almost unheard of prior to Prohibition – bartenders needed considerable skill and inventiveness to arrive at new drink recipes – called cocktails – which masked the taste and texture of the cheap booze.

The access to fresh fruit, especially citrus, made California a leader in the development of many well-known and oft consumed cocktails today. Because of the sheer number of speakeasies and less well-heeled establishments known as blind pigs throughout Los Angeles, enforcement in the city was sporadic, and many speakeasies operated throughout the period without ever being disrupted by a raid.

At least twice Californians voted on statewide enforcement propositions and defeated them, and local support for enforced temperance was tepid at best, leaving the enforcement of the Volstead Act to the overextended federal government.

Leland Chumley opened his speakeasy on a corner lot in 1922 in New York’s Greenwich Village. A corner lot was particularly handy for an establishment devoted to the dispensing of illegal liquor. In the event that there should be unwelcome attention from the constabulary, a convenient second door on the side of the building provided the opportunity for rapid egress from the premises without running the gauntlet of incoming policemen.

Neither door leading into the establishment was marked, other than the address. Chumley’s rapidly became popular with the Village crowd, writers and poets, social activists and journalists, and other denizens of that famously eclectic neighborhood.

Chumley’s address (marked on one door) was 86 Bedford Street. The term “86”, meaning to discard something among restaurant employees, has been said to originate from the address. Leland Chumley paid protection money to co-operative local policemen (many of whom were devoted customers) and was rewarded with advance notice of an intended raid on the premises.

Reportedly one of the bartenders would answer the phone to hear the cryptic message to 86 the patrons and any visible booze, resulting in a quick emptying of the bar of patrons and products through the door bearing that number. The call signified the police would enter through the side door. Beside the side door, Chumley’s contained (and still contains) numerous hidden doors and connecting tunnels to allow for quick departure.

The side door, which opened into a small courtyard, was known to the patrons as the Garden Door. Both doors could be used for entry by customers in the know and known to the establishment. Chumley’s remained open long after Prohibition, always a favorite haunt of New York writers, and has recently been renovated. Perhaps in deference to its days as a speakeasy, both doors remain unadorned with signage, and customers desiring to enter must know exactly where they are going, as their forebears did during the Roaring Twenties.

The citizens of South Florida were so disdainful of Prohibition that it would seem as if speakeasies were unnecessary. Rumrunners and bootleggers were rife and the police exhibited little interest in stopping them from completing their self-appointed rounds. When they did, the courts and juries were hesitant to convict. In one famous case, a New York real estate magnate (and bootlegger) named Harry Black was arrested with more than 50 cases of liquor stashed in his private railroad car. When bottles of the illicit liquor were used as evidence in his trial four members of the jury insisted on sampling them to ensure that they did in fact contain booze. The jury deliberated for less than ten minutes before Harry Black was found not guilty.

Regardless, some entrepreneurs opened blind pigs and speakeasies, and one such was Lighthouse Point’s Cap’s Unique. Cap’s was opened by Eugene “Cap’s” Knight, a former merchant mariner, sometime fisherman, and enthusiastic rum rummer. Cap beached a barge near a small inlet and erected a bar and gambling facility using the barge as a base. Because he was well known to the locals as “Cap” the establishment became universally referred to as Cap’s Place.

Cap’s was quickly popular as a gambling and drinking establishment and while it was well known for its illegal activities it was mostly left alone. Soon additional buildings were erected on the nearby shore, mostly for legal activities, though some were used to store additional liquor and other supplies.

Cap’s was reachable only by water, which provided additional security in the unlikely event that the authorities would attempt to curtail the fun. A thirsty hopeful would park near Hillsboro beach facing the speakeasy and flash headlights, in a previously agreed pattern. If the pattern was correct a small boat would emerge from the shadows of the barge and row ashore to collect the patron.

Nearby Hillsboro Inlet Lighthouse was used as a vantage point to ensure there was no encroachment by federal officers or the Coast Guard approaching by sea. The Lighthouse, manned by Cap’s brother Tom, would flash its beacon when unknown vessels got too near. Since 1990 Cap’s Place, formerly patronized by Al Capone, Meyer Lansky, Humphrey Bogart (while filming Key Largo), and more recently George Harrison and Mariah Carey, has been listed on the National Register of Historic Places.