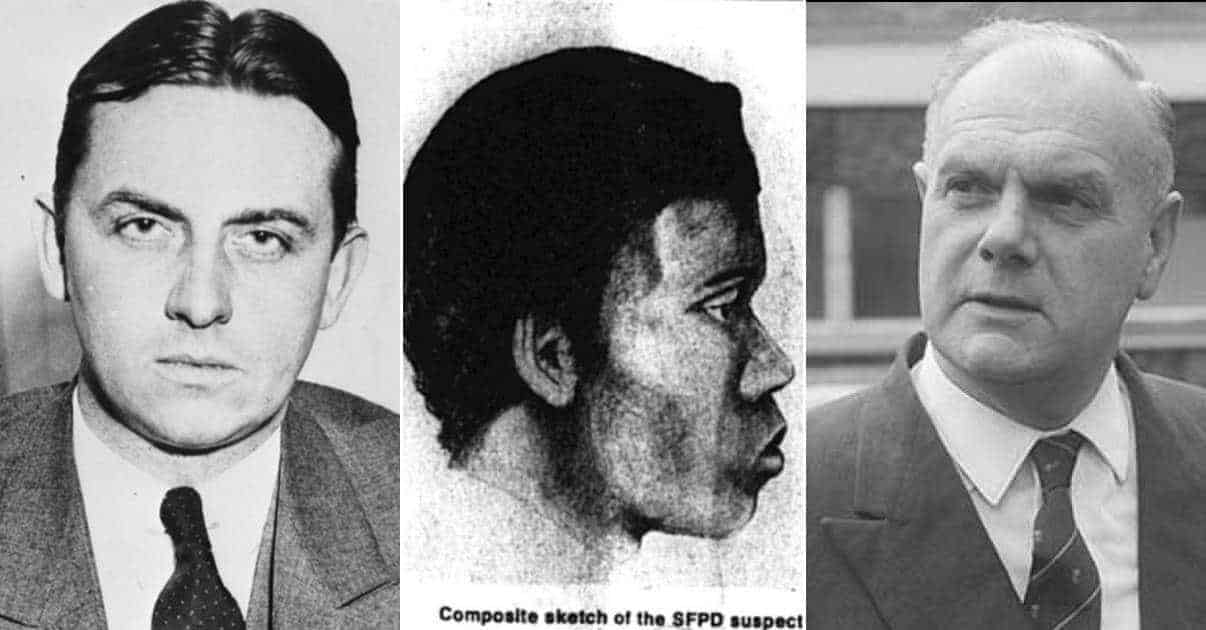 While the Zodiac killer garnered far more attention, the Doodler apparently had more victims and also operated in California. Also known as the Black Doodler (he was believed to be African-American), this serial killer operated in San Francisco’s gay community and killed up to 14 people from January 1974 to September 1975. He was given his nickname due to his penchant for drawing sketches of his victims prior to the sexual encounters and subsequent attacks.

To say The Doodler case is shrouded in mystery is an understatement; it is difficult to even find the names of all his victims. What is known is that the first victim was Gerald Cavanaugh, a 49-year-old Canadian-born male who moved to San Francisco. The body of the mattress factory worker was found on 27 January 1974 at the water’s edge of Ocean Beach. According to the coroner, Cavanaugh was conscious at the time of the murder and had tried to fend off his assailant. Self-defense wounds were found on the body. Aside from what I mentioned above, little is known about the victim other than he was a Catholic who had never married. Indeed, he was originally unidentified and called â€˜John Doe #7′.

It appears as if The Doodler caught the eye of patrons of Castro bar, a well-known haunt for homosexuals in the city. He would flatter his victims by drawing caricatures of them and on a number of occasions; men would leave the bar with The Doodler and go to a more secluded spot where they were murdered.

The next known victim was Joseph â€˜Jae’ Stevens who worked as a â€˜female impersonator’. His body was found off the walking path of Spreckels Lake (which was quite a distance from the Castro bar) on 25 June 1974. He had been stabbed in the lungs and stomach. The other named victims were Klaus Christmann, Frederick Capin and Harald Gullberg. Gullberg’s body was found on 4 June 1975 about two weeks after he had been murdered. There is some doubt as to whether he was even a Doodler victim.

There are several issues when it comes to this case. The most pertinent was probably the reluctance of the men who survived attacks from The Doodler (there were allegedly at least three survivors) to come forward for fear of being â€˜outed’. A number of victims were seemingly closeted gay men. Even the first openly gay man to elected to public office in the city (and state of California), Harvey Milk, expressed sympathy for the men who would not speak to the police for this reason. As the victims were drag queens, sadomasochists and upper-middle-class men, police initially believed that there were three different killers.

It is said there were several suspects including at least one prime suspect who had been identified by survivors. Yet because these men refused to come forward for fear of being ostracized by society, (homosexuality had been classed as a â€˜disorder’ at this time) no action was taken. In the end, no one was ever arrested or charged for the murders.

A sketch was released and it was believed The Doodler was an African-American male who was between 5ft 10 and 6ft tall and 18-21 years of age. He was said to have worn a Navy-type watch cap and possessed above-average intelligence. There is also a belief that he was an art student. For all we know, The Doodler could still be alive and living in San Francisco!

This serial killer operated in the city of New Orleans from May 1918 until October 1919. He is believed to have killed 6-7 people and injured another 6-7. Most of the victims were Italian-American including the first two who were killed on 22 May 1918. It appears as if his targets were women as men were only attacked if they got in the way of his plans.

Harriet Lowe and Louis Besumer were the next victims but survived a brutal axe attack. The next victims also survived but Joseph Romano was not so lucky and his body was discovered on 10 August 1918. An attack on the Cortimiglia family on 10 March 1919 resulted in the death of 2-year-old Mary Cortimiglia. Her parents, Rosie and Charles survived. As an aside, Rosie falsely accused two men of the crime but later backtracked and the men were released after being found guilty!

Panic spread when details of a letter sent to local newspapers was released. The letter began with “Hell, March 13, 1919” and “Esteemed Mortal.” The writer said he was fond of jazz music and was planning to “pass over New Orleans” on 19 March. He announced that he would stay away from any establishments that played jazz music but people who did not play jazz would “get the axe.” The city resonated with jazz on the night of the 19th and there were no attacks.

However, the Axeman did strike several more times. Steve Boca and Sarah Laumann survived separate attacks but Mike Pepitone was found dead by his wife on 27 October 1919 in what was apparently the last of the attacks.

No one knows for sure why the attacks suddenly stopped but according to crime writer, Colin Wilson, it could be because the killer was Joseph Momfre who was shot dead by Pepitone’s widow in December 1920 in Los Angeles. However, there are no records supporting this version of events although it could be a case of a misspelled surname. Momfre could be â€˜Mumre’ or â€˜Mumfre’.

Intriguingly, there is evidence that the prime suspect in a 1912 murder was called â€˜Mumfre’. The thing is, while this individual attacked an Italian couple (just like the Axeman), he used a gun which is a very different modus operandi.

This is the nickname given to the perpetrator of the Hammersmith Nudes murders in London in 1964 and 1965. As is the case with a lot of serial killers, especially those who remain at large, there is some dispute as to the exact number of victims. Police are confident that this killer was responsible for at least 6 deaths in the Hammersmith area but believe he may also have murdered two others. He generally preyed on prostitutes just like his infamous 19th century namesake.

The first definite victim was Hannah Tailford who was found on 2 February 1964. Her almost naked body was discovered floating by the River Thames. The only item of clothing she was wearing was a pair of stockings rolled to her ankles and her underwear was found in her mouth. In addition, some of her front teeth were missing.

The other victims were Irene Lockwood, Helen Barthelemy, Mary Flemming, Frances Brown and Bridget O’Hara. All of these women had been strangled and stripped with several of their front teeth missing. On the final four victims, flecks of paint were found on their bodies. This gave police the idea that the killer worked at a motor car manufacturer. O’Hara was found on 16 February 1965 and is the last known victim of Jack the Stripper. The other possible victims were Elizabeth Frigg who was found on 17 June 1959 and Gwynneth Rees who was discovered on 8 November 1963. Both women were strangled, found near the River Thames and Rees had several of her front teeth missing.

Detective Chief Superintendent John Du Rose of Scotland Yard led the manhunt for the killer and interviewed an estimated 7,000 people from the area. Du Rose announced that the police were closing in as a means of trying to get Jack the Stripper to either reveal himself or make a mistake. He falsely claimed that the police had narrowed the list down to 20 suspects in a news conference and later said there were only 3 prime suspects left. While the killer did not strike again after the first conference, no one was ever charged with the Hammersmith Nudes murders.

There were a substantial number of possible suspects that have been named throughout the years. One of the most famous was boxer Freddie Mills who was found dead in his car in July 1965. It was ruled a suicide but Mills’ family and friends believe he was murdered. Another theory is that convicted murderer Harold Jones was Jack the Stripper. Jones killed two young girls in 1921 but escaped the death penalty because he was only a teenager himself. He was released in 1947 and lived in the area at the time of the killings.

Du Rose himself believed Mungo Ireland was the killer. During an interview with the BBC in 1970, he referred to a man called â€˜Big John’ as his prime suspect in the case. In a book, Du Rose also revealed that the suspect had committed suicide before he could be captured. Ireland was a security guard who worked on the Heron Trading Estate where Bridget O’ Hara’s body was discovered. The police believed the killer was a night watchman since the murders seemed to take place between 11 pm and 1 am with the bodies dumped at 5 am. Ireland’s 10 pm-6 am shift fitted in perfectly with this time frame.

Ireland committed suicide by gassing himself in his car on 3 March 1965. His suicide note said that he couldn’t stick it any longer and he would be found in the garage.

Scientific American – 5 Myths about Serial Killers and Why They Persist

Live Science – How Many Uncaptured Serial Killers Are Out There?

The Line Up – A Butcher Stalks the Streets: Who Was the Cleveland Torso Murderer?

SF Chronicle – The Doodler: No One Knew What He Looked Like

SF Times – The Doodler: The Murderer That Loved to Draw His Victims

Grunge – The Doodler: The Truth About The Unidentified Serial Killer

Ranker – 13 Grisly Facts About the Axeman of New Orleans