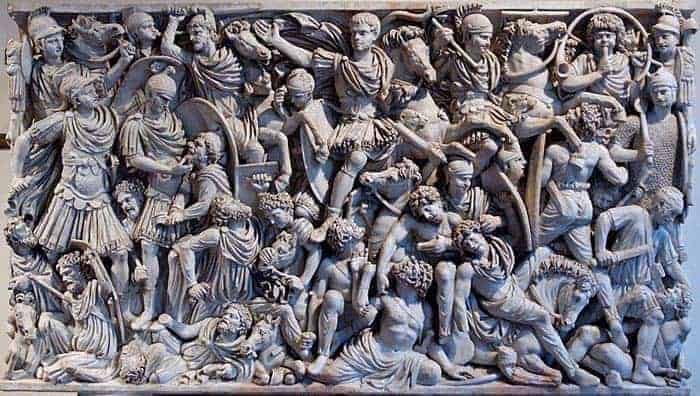 3 – Rise of the Barbarians

By the middle of the third century, Rome’s vast Empire had become increasingly difficult to control. It extended as far north as Britain and the Rhine, as far south as the northern coast of Africa, and as far east as modern-day Iraq and Syria. Controlling such a vast territory was a bureaucratic and logistical nightmare. Rome increasingly relied on the provinces to supply manpower and supplies, but during the crisis, the allegiance of the soldiers lay away from Rome. Every province that provided an army to Rome had its own rituals, customs, and beliefs and with Rome in such a mess, these areas saw an opportunity to break free.

Due to the inability of anyone to seize an iron grip on the throne, provinces advanced with the Franks penetrating the Rhine, the Goths threatening the Danube, and the Saxons invading Britain. In the east, the Sassanids became more aggressive, and suddenly Rome was in a very precarious position. It should be noted that for most of these tribes, the main goal was to find land to farm in; they didn’t seek the destruction of the Empire. As a result, the frontiers of Rome experienced almost incessant raids from the aforementioned tribes among others.

Ardashir took control of the Sassanid Empire in 226 AD and was determined to restore his nation to the heady days of the ancient Persian Empire. His son Shapur followed in his father’s footsteps and pursued an aggressive expansionist policy. The Sassanids regularly fought the Romans in the third century, and Shapur defeated the armies of three different Roman emperors as he took full advantage of the chaos of the enemy. He defeated Valerian at the Battle of Edessa in 260 AD and captured the emperor, who died in captivity.

Although Gallienus was supposed to be the new emperor, usurpers appeared everywhere, and in less than a decade the empire was split into three parts. After Valerian’s death, the provinces of Gaul, Hispania, and Britain formed the Gallic Empire (which lasted until 274 AD). After the death of the Palmyrene leader Odaenathus in 267 AD, the Palmyrene Empire broke away from the Empire; it consisted of the provinces of Syria, Aegyptus, and Palestine. The Italian-centered Roman Empire stood against these foes and needed a capable leader to survive the crisis.

As luck would have it, one arrived on the scene when the Empire needed it most. Aurelian became Emperor in 270 AD and steered the Empire through the very worst of the crisis. Within a few years, he defeated the Vandals, Palmyrenes, Persians, Visigoths, and the rest of the Gallic Empire. Rome was returned to a single entity by 274 AD, but the old problem of the military dictating the Empire’s leader arose and Aurelian was murdered by high-ranking members of the Praetorian Guard. As well as military interference, an increase in enemies and a depressed economy, there was one other reason for the Third Century crisis.

There were already clear signs of depopulation in Italy by the second century AD and this ‘decay’ canceled out any progress made in provinces such as Gaul and Germany. The economic depression resulted in a greater degree of self-sufficiency amongst citizens of the Empire, and they began to cultivate large estates. The result was downsizing in the size of towns and cities, and this decentralization damaged the very structure of Rome.

Although the crisis had been decades or arguably centuries in the making, matters were not helped by the Plague of Cyprian that broke out in 251 AD. This pandemic, almost certainly smallpox, claimed millions of lives throughout the Empire. At its worst, the plague killed up to 5,000 people a day. It began in Ethiopia in 250 AD and reached Rome by 251. It ultimately spread all the way to Greece and Syria and lasted for approximately 20 years.

The series of attacks on the Empire’s frontiers only exacerbated the effect of the plague, and it led to spells of drought, famine, and floods which devastated the population. It was named after the Bishop of Carthage, Saint Cyprian, who said it was possibly a sign that the world was coming to an end. The plague even claimed the life of Emperor Claudius II Gothicus in 270 AD. Oddly enough, this event might have helped end the crisis in the long term because his successor, Quintillus, reigned for just a few months and was replaced by Aurelian who transformed the Empire’s fortunes.

Before the Plague of Cyprian, the Empire was suffering from a depopulation problem, and the issue got substantially worse as a significant percentage of its population was wiped out. As well as killing farmers, it weakened the army to the extent that it is remarkable that Aurelian achieved so many military successes.

Diocletian & the End of the Crisis

Aurelian deserves much of the credit for helping to bring the crisis to an end, but it was Diocletian who ended it conclusively. He seized the throne in 284 AD and proceeded to restore efficient government to the Empire. Diocletian realized the problems Rome had faced in the previous half-century and took measures to ensure there was no repeat during his reign.

First and foremost, he moved to restore the supreme authority of the role of Emperor that was sorely lacking during the Third Century crisis. Aurelian had attempted the same by proclaiming himself as ‘Dominus et Deus’ (Lord and God). Diocletian assumed this title and also insisted on elaborate monarchial ceremonies, like those performed by rulers in the East, to ensure he was seen as ‘godlike.’ It was the end of the era of ‘the first citizen’ as Diocletian was determined that the Emperor could not have his authority questioned.

Rather than try to rule the vast Empire by himself, however, Diocletian was happy to share power and responsibility. During the Crisis, emperors had no trustworthy people around them, so power-sharing was virtually impossible. Diocletian had no such problems as he appointed his friend Maximian as co-Augustus. Another problem was the lack of heirs. Diocletian found a solution to this issue by appointing Galerius and Constantius as ‘Caesars’; they were groomed as successors.

It was a good idea in theory as there was one leader for each frontier (Rhine, Danube and the east) with another person in reserve. In 305 AD, Diocletian and Maximian stepped down and allowed both Caesars to assume power. It was a mistake as Maximian lusted after the throne and attempted to seize power the following year in what was the beginning of yet another vicious civil war.

Diocletian tried to build upon the economic reforms of Aurelian by introducing new, purer coins. The solidus became the Empire’s standard currency. Diocletian also created the Edict of Prices to try and curb inflation, established a land tax and a ‘head’ tax. The new tax system enabled the Empire to accurately calculate the amount of tax it should receive on an annual basis, and this allowed it to plan ahead. He reformed the military by increasing the amount of cavalry and creating faster-moving armies designed to react to trouble wherever it occurred.

Although the Third Century crisis began with the death of Alexander Severus, it was the Severan Dynasty that caused a lot of the problems in the first place. The increased presence of the military in politics coupled with vast salary increases gave soldiers a dangerous amount of power. They could, and often did, choose an emperor almost on a whim and kill the old one.

The increased level of military expenditure, coupled with the debasing of the currency, resulted in a severe economic crisis that damaged Rome’s trading network. Citizens started to barter, create large estates and move away from urban areas which led to depopulation. Frontier tribes and enemies such as the Sassanids began to advance as they saw a chance to capitalize on a weakening Rome and to cap everything off; a deadly plague came and killed millions of people over a 20 year period.

Although Diocletian is widely credited with bringing a halt to the crisis, the work of Aurelian should not go unnoticed. As well as defeating most of Rome’s enemies in a very short space of time, he initiated several reforms that Diocletian built on a decade later. The Empire survived but was changed forever.