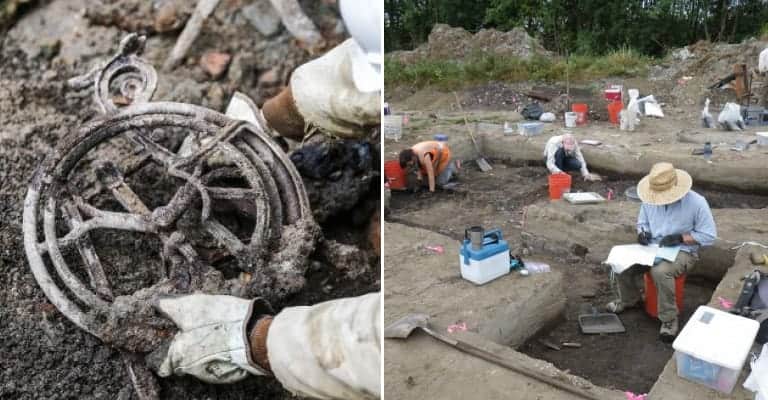 Oakbrook Terrace sounds like a sleepy little neighborhood, so they probably were quite surprised when the construction site next door dredged up tombstones and caskets. Condos were being built on the construction site, right next to Chapel Hill Gardens Cemetery. One Oakbrook Terrace resident called journalists to report the issue, who did a bit more digging. As it turns out, they moved the cemetery, and the owners claimed that all bodies along with it. The headstones were explained to be duplicate grave markers left from when the bodies were laid to rest there initially. Thankfully, they did not discover any human remains on the property.

24. Otters Found Under a Driveway

Usually, replacing your driveway seems like a straightforward task. It is less direct if you find a den of otters when replacing your driveway. That’s precisely what happened in Titusville, Florida. When they found them, the adult otter – presumed to be the mother – ran off and didn’t return. The Florida Wildlife Hospital and Sanctuary took over the care of the three otter pups. They were around three weeks old at the time. Typically, if you notice otter pups in the wild, it is best to leave them alone; their mom is probably nearby and will return, but, in this case, she did not. The cost of raising each otter pup is around $2,300.

Construction takes planning. Surprises tend to be a bad thing in the field, and workers were not prepared for the shock of a 33-foot long anaconda slithering out from a Brazilian cave. This 881-pound snake was unfortunately killed in an explosion when workers were detonating inside the cave in preparation of work on the Belo Monte Dam. If you have a fear of snakes, this discovery probably makes you slither away from your desk in disgust.

As construction workers dug through the earth with a bulldozer in Palestine Square in downtown Gaza, bystanders took pictures and videos of the archaeological findings laid out in front of them. The project, formerly going to be a shopping center, was now turned into excavations for more historical pieces of what was previously a church from the Byzantine period. Unfortunately, the historical ministry’s budget is extremely limited in Palestine, and this site would require millions of dollars to carry out proper excavation for extraction and analysis, so there is a valid concern that some of the information it carries will be lost.

Construction workers laying pipes in Seville, Spain have unearthed 600 kilograms, or 1300 lbs, or Roman coins, stored in 19 amphoras. The coins are bronze and silver-coated and spread across the 19 amphoras, 10 of which were intact, and just one meter underground. The currency was believed to be newly minted and used to pay soldiers or civil servants. The amphoras were extremely heavy, and they could not transport them easily. The coins bear the images of emperors Constantine and Maximian, the likes of which the Seville Archaeological Museum had never seen before. Of course, the regional cultural department has halted construction work in the park while archaeologists investigate further.

28. An Old Grenade Found in a Boston Construction Site

Bomb threats are taken very seriously, as they should be. So when construction workers found a grenade at their worksite in May 2016, it’s safe to say they took it very seriously. The workers were excavating a dirt embankment to build a concrete retaining wall along Queen Anne Road when they found a rusty metal grenade with white lettering along the side. One worker called his boss, who promptly told him to call the police. No one touched the grenade, which is the safest thing to do when you’re staring a missile in the face.

Boston State Police was able to identify it as a rifle grenade and removed it for disposal out of town. They said it was probably a device for training purposes now.

When Ericka Karner was having her home renovated, construction workers found a small coffin under the garage. There were no identifying marks, so they nicknamed the girl in the coffin “Miranda.” They believed burial took place around 120 years earlier. She was thought to be left behind when the Odd Fellows cemetery moved away. When Ericka wanted to help bury her, the city wouldn’t allow it because she didn’t have a death certificate, so an organization called Garden of Innocence, which provides burials for unidentified children, stepped in to help determine Miranda’s identity. After nearly a year, they were able to identify her as Edith Howard Cook, who died on October 13, 1876, as a result of a protein deficiency, which would be easily curable today.

Until Edith’s burial was adequate, Ericka and her husband, in addition to the construction workers, said they heard toddler footsteps on the second floor. Now, Edith and her coffin rest peacefully in Colma’s Green Lawn Cemetery.