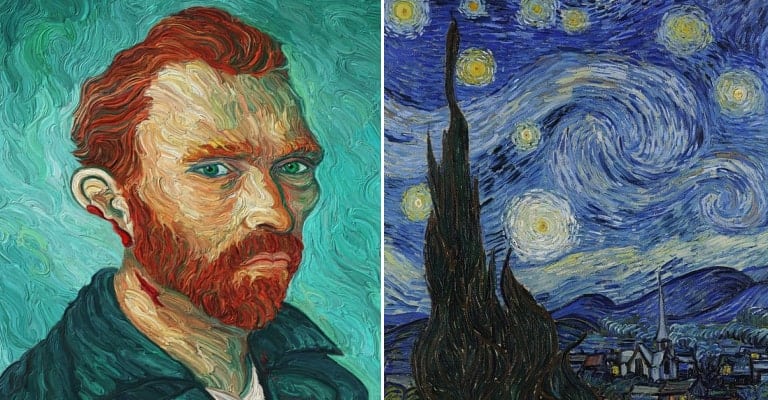 21. Several Members Of The Van Gogh Family Spent Time In A Mental Institution

20. He Had Only One Romantic Relationship Throughout His Life

No one is sure if Vincent van Gogh had a social anxiety disorder or if he was just naturally shy. However, what people do know is that he was rarely seen out of his house and didn’t have very many friends. In fact, many people believe that while Van Gogh had a few romantic interests, he only had one real romantic relationship throughout his whole life. This relationship started in 1882 to Clasina Maria Hoornik, who was not only pregnant but also had a five-year-old daughter. At the time, Hoornik struggled after her unborn child’s father abandoned the family.

19. Vincent’s Father and Brother Helped Him End His Relationship With Hoornik

Hoornik, who was a prostitute and a seamstress, moved in with Van Gogh not long after they met. The couple seemed to get along pretty well, and Vincent became convinced he was going to marry her. Unfortunately, his brother Theo and his father did not approve of Vincent’s relationship. Vincent’s father was a minister who did not accept Hoornik for many reasons. After speaking to his brother, Vincent found out that Theo agreed with their father. While Vincent continued to live with Hoornik for a little while longer, the two split up for unknown reasons.

While no one is sure why Van Gogh and Hoornik ended their relationship, people do know that Hoornik gave Vincent gonorrhea. Historians also know that after ending the relationship, she dropped his two children off with family members as she could not provide for them. In 1904, Hoornik headed to the Rotterdam canal, where she committed suicide. Historians have tried to connect her death to Vincent’s death, which occurred in 1890; however, no one can prove this. Other people have been attempting to connect Hoornik’s second child to Vincent. However, this has also not confirmed.

17. The Nazis Declared Him A Degenerate

While Vincent Van Gogh was not living close to anywhere near World War Two, his artwork was highly popular during this time. Like many other artists during the 1930s and into 1940s, they were all considered by the Nazis to degenerate. But, when it came to Van Gogh, the Nazis took their hate a bit farther. They not only took his artwork out of museums, but they also held a massive sale so they could gain money by getting rid of Van Gogh’s artwork. One of the paintings they sold was Van Gogh’s portrait.

16. He Was A Selfie King Before People Knew What Selfies Were

One of Vincent van Gogh’s most famous works is his own portrait, which was bought by Maurice Wertheim for 12,000 pounds. This portrait has become famous not only for Van Gogh’s oblong skull but also for the jade background, which is very unusual for his time frame. This portrait is known as the Self Portrait Dedicated To Paul Gauguin and was complete in 1888. While the two men had a falling out, they did remain in touch. In fact, after Van Gogh died, Gauguin kept the portrait until 1897 when he needed the money.

15. He Completed His Most Famous Painting In A Mental Institution

Vincent van Gogh became a patient at Saint-Paul Asylum in St. Remy-de-Provence in May of 1889. While he could not paint in his bedroom, they gave him another recreational room where he could be left alone to paint in. It was here that Van Gogh painted The Starry Night while looking at the night sky. He then finished the painting the following day. Today, many people imagine how Van Gogh came to create this painting. Some people feel it was through his hallucinations while others think he saw it was what he saw as he looked out the window.

Even though The Starry Night became the painting that Van Gogh is most known for, he felt that the art was horrible. His reasons for this are unknown. However, people do know that he did not keep the paintings with the ones he often shared with other people or took to art shows. In fact, in writing about this painting, Van Gogh stated it was a failure: “I have been slaving away on nature the whole year… And yet, once again, I let myself go reaching for stars that are too big – a new failure …”

Starting in the 1880s, Vincent van Gogh’s mental health began to decline. He not only spent a lot of time in the mental hospital, but he also suffered from depression, social anxiety, and possibly other mental illnesses. By the time July 1890 rolled around, Van Gogh couldn’t handle his life anymore. On July 27, 1890, Van Gogh walked to the wheat fields north of his residence at an inn in Auvers-Sur-Oise. He then shot himself in the chest. The bullet did not officially take Vincent’s life until 30 hours later.

12. One Of His Paintings Showed The Field Where He Committed Suicide

One of the most shocking paintings from Vincent Van Gogh is the one called Wheatfield With Crows. This is a painting of a wheat field which has crows flying above the field. Many people who know of Van Gogh’s death, feel it is the same field that he went to on July 27, 1890, with the plan to end his life. While no one is sure if this is the last work Van Gogh painted, we do know that it was one of his last and shares a haunting image to the same field.

11. Citizens Believed He Was A Danger To The Community

Vincent van Gogh was never known to be one of the friendliest people in Arles. In fact, he didn’t have very many friends, and most people who knew him stayed away from him. They felt that not only was he mentally unstable, but he could also be incredibly mean. As his mental health continued to decline, many residents became overly concerned. They decided to send a petition to town officials, which stated they believed Van Gogh was a danger to the community. Some historians believe it was this petition that led Van Gogh to commit himself to the mental asylum.

10. Van Gogh Painted One Of The Most Expensive Paintings In History

Even though Van Gogh only painted for half of his life, he kept himself very busy as an artist. People believe he painted and drew over 2,000 pieces of art. He not only made some of the most famous paintings in history, but he also created one of the most expensive. In 1990, Van Gogh’s Portrait of Dr. Gachet sold for $82.5 million. This painting is known to be one of the last Van Gogh completed before he committed suicide.

9. Most of Van Gogh’s Work Was Thrown Out

During his lifetime, very few people thought that of Van Gogh as a great artist. In fact, most people threw away the majority of his drawings, paintings, and any other artwork. Van Gogh would sometimes give away his artwork, which would be thrown away by the receivers. Even Van Gogh’s mother threw most of the drawings she received from her son. The painter himself is known to have thrown a lot of his work away. No one thought his work would ever amount to anything, even after his death.

8. We Know About Van Gogh’s Life Because Of His Letters

Vincent van Gogh was a reclusive person who didn’t share a lot of information about himself, except with letters. In fact, it is because of these letters that we know the most about Vincent van Gogh. He wrote over 800 letters to his friends, mainly Paul Gauguin and Emile Bernard. While most of these letters do not have a date, historians have put the notes in chronological order in order to fill in the pieces of Van Gogh’s life. On top of this, Van Gogh wrote over 600 letters to his brother, Theo. Thankfully, people kept these letters.

7. Van Gogh’s Therapist Took Millions Of Dollars’ Worth Of His Art

It seemed that after Vincent van Gogh’s death, people started to realize what an incredible talent he had when it came to his art. One of these people was Van Gogh’s own therapist, Dr. Paul Gachet. After Van Gogh committed suicide, his brother Theo invited several of Vincent’s friends and others to pick pieces that they could remember him by. When it came time for Dr. Gachet and his son to take items, they left with several of Van Gogh’s paintings. While the son kept them for decades, he eventually donated them to a museum.

Vincent van Gogh spent the last three months of his life in Auvers-Sur-Oise, which is about 20 miles from Paris. Theo sent his brother there after finding out about one of the best doctors he hoped could help his brother find mental stability. Like Van Gogh, Dr. Gachet was an artist and trader. Theo believed that they would be able to connect because they had the same type of career. Van Gogh stayed in Auvers getting intense therapy from Dr. Gachet. Unfortunately, the doctor would be unable to help Van Gogh, who committed Suicide in July of 1890.

For the last three months of his life, Van Gogh stayed with innkeeper Arthur Ravoux. The Ravoux family got to know Van Gogh very well as he would have supper with them every evening. In fact, on the day that Van Gogh committed suicide and didn’t show up for the evening meal, the Ravoux family know that something was wrong. After Van Gogh’s death, Theo asked Ravoux if he wanted anything. Ravoux said no but kept Van Gogh’s paintings he had. He sold these paintings to two American artists for 40 francs a piece.

Theo spent his days caring for his brother Vincent, especially in the last few decades of his short life. He not only supported Vincent financially, but he also did whatever he could in order to try to make Vincent’s mind more stable. Unfortunately, Theo wouldn’t be able to save his brother, no matter how hard he tried. From the moment Theo heard about Vincent’s death, he started to decline health wise. By November 1890, Theo became a patient at a psychiatric hospital, where he died a few months later from illness and severe depression.

Johanna “Jo” van Gogh-Bonger was born in Amsterdam during the year 1862. She would marry Vincent’s brother Theo around 1889, and together they would have a son. After Vincent’s death, Theo died shortly after. This left Jo to find a way to make money off of Van Gogh’s paintings. To help her mission, she included all the letters that Vincent wrote to Theo. Unfortunately, she would never live to see Vincent become famous. However, her son would carry on her mission and help establish the Vincent van Gogh Museum in Amsterdam.

2. He Mainly Painted Landscapes Because He Had Trouble Finding Models

While no one really knows why people didn’t like to model for Vincent van Gogh, many historians believe it was because he was a troubled man. While he was well-liked in his early years, the older Van Gogh got, the more reclusive and depressed he would get. For various reasons, this made people want to keep away from him. Therefore, they weren’t often comfortable modeling for Van Gogh’s paintings. Because of this,

1. Today Vincent van Gogh Is A True Inspiration To Many Artists

During his lifetime, Vincent van Gogh didn’t paint like other artists. His style was different, and this would often cause problems between him and his teachers in school. However, today is a different story. Many artists cite Vincent Van Gogh as one of their main inspirations due to his unique style. On top of this, his paintings are being reproduced all over the world and hang in homes, offices, and many other buildings. His original paintings that survive are at a variety of museums around the globe.