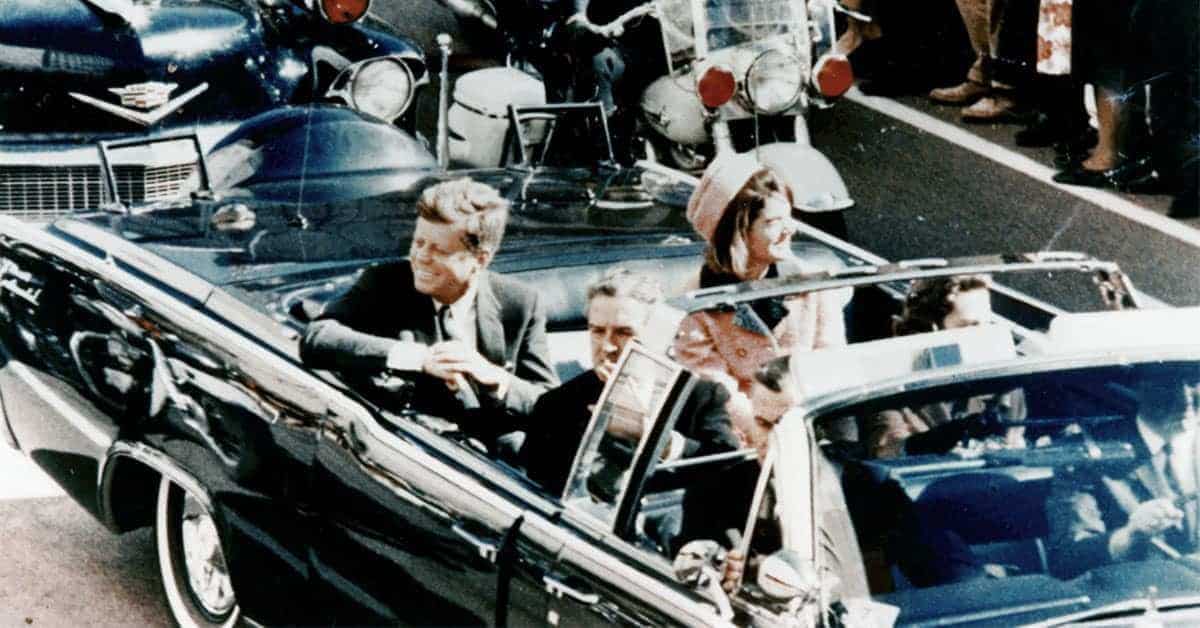 John F. Kennedy, the 35 President of the United States, was assassinated on Friday, November 22, 1963, while riding in a motorcade in Dealey Plaza with his wife Jacqueline, Texas Governor John Connally, and Connally’s wife, Nellie. Kennedy had been in Texas to ease relations in the Democratic Party between Connally and the more liberal members of the party. Kennedy was fatally shot by former U.S. Marine, Lee Harvey Oswald.

Many bystanders said they heard what they first thought to be a firecracker or the backfire of one of the vehicles in the motorcade. According to the Warren Commission and the House Select Committee on Assassinations, Kennedy was waving to the crowds on his right with his right arm upraised on the side of the limousine when a shot entered his upper back, penetrated his neck and slightly damaged a spinal vertebra at the top of his right lung. The bullet exited his throat nearly centerline just beneath his larynx and hit the knot of his tie.

Governor Connally was hit in the back, with the same bullet, just below the armpit. It exited his chest and hit him again in the arm, just above the right wrist, shattering his right radial bone. The bullet then exited just below the wrist at the inner side of his right palm and lodged in his inner left thigh.

The presidential limousine was passing a grassy knoll on the north side of Elm Street at the time of the fatal shots. As the motorcade left the plaza, police and spectators ran up the knoll but found no sniper. S.M. Holland, who had been watching the motorcade, testified that “immediately” after the shots were fired, he spotted a plume of smoke rising from the trees by the fence. Lee Bowers, a railroad switchman sitting in a two-story tower, had an unobstructed view of the fence atop the grassy knoll. He saw for men in the area who were acting “something out of the ordinary, sort of milling around.”

Howard Brennan, a pipefitter who was sitting across the street of the Texas School Book Depository, notified the police that he was watching the motorcade when he heard a shot come from above. He looked across the street to see a man with a rifle take a second shot from a corner window on the sixth floor. He saw the same man minutes earlier looking out the window.

The Warren Commission additionally concluded that the three shots fired “were not evenly spaced. Most witnesses recalled that the second and third shots were bunched together.”

President Kennedy was declared dead at 1:00 p.m. At 2:38, aboard Air Force One, Lyndon Johnson took the oath of office and became the 36 President of the United States of America.

Live Science – How John F. Kennedy’s Back Pain Affected His Life and Death

The Daily Extern – Science Scene: JFK Assassination A Conspiracy Of One

History Collection – “I Am Only A Patsy”: 6 Reasons Why Lee Harvey Oswald Was NOT JFK’s Killer

Smithsonian Magazine – What Does the Zapruder Film Really Tell Us?

History Collection – Murder of a President: 5 Fascinating Conspiracy Theories about the Kennedy Assassination