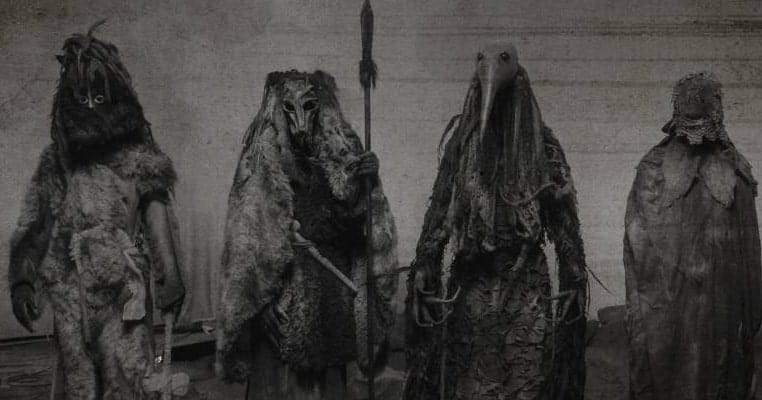 12. Uktena, the Horned Water Serpent, was a near-invincible crystalline snake with a gemstone in its head

The Horned Serpent (known as Uktena to the Cherokee people) is a mythological monster that recurs throughout several Native American oral histories, especially in the Great Lakes and Southeastern Woodlands regions. Described as being as large as a tree trunk and covered in magical scales, with horns and a gemstone on its forehead, the Horned Serpent could not be harmed except in a single spot on its head. Whilst its breath was poisonous, to slay the monster would win the warrior a crystal of immense power granting a life of successful hunting, rainmaking, and romance. According to Cherokee legend a great warrior name Aganunitsi achieved this feat, wherein he discovered the crystal required a sacrifice of blood each week. Without this tribute the crystal searches for blood itself, becoming a ball of fire and murdering those its encounters.

Other variants of the Horned Serpent includes the “Tie-Snake (estakwvnayv) in Muscogee Creek traditions. Slightly smaller than the Horned Serpent and likewise covered with crystalline scales with a large gem in its forehead, the snake was considered capable of prophecy and its horns were believed to carry medicinal powers. Unlike the Uktena, the Tie Snake was not considered to be a evil or willfully harmful to humans. Equally the Alabama people told stories of a “Crawfish Snake”, or tcinto såktco, of a similar design and purpose. In contrast traditional Sioux belief claimed these serpents were dangerous water monsters of the ancient world, but had been destroyed by the Thunderbirds – supernatural beings of great power – and only their lesser ancestors, such as lizards and snakes, had survived; it is theorized this mythological belief stemmed from the discovery of dinosaur fossils by the Sioux, and the Thunderbirds of pterosaur skeletons.

13. In addition to the Teihiihan, numerous races of evil dwarves are believed to roam North America

The Nimerigar (or “people eaters”) are a race of dwarves belonging to Crow and Shosone legend, said to reside in the Wind River and Pedro mountain ranges of modern-day Wyoming. Described as aggressive by nature, they shoot poisoned arrows and kill their own kind should they fall ill with a blow to the head. During his famed expedition Meriwether Lewis claimed to have seen evidence of the “deavals”, describing them as roughly 18 inches tall and highly ferocious. Although originally believed to have been entirely mythical the 1932 discovery of the “San Pedro Mountains Mummy” – a 14 inch tall mummy – has brought this into question, with tests demonstrating the individual was approximately 65 years old at time of death and violently killed by an inflicted head wound. Since 1932 several other similar bodies have been recovered across North America, lending credence to a 1778 account suggesting the existence of a pygmy burial ground and of the possible historical existence of people akin to the Nimerigar.

Not isolated solely to the Nimerigar, Crow folklore also includes the Nirumbee: a race of goblin-like creatures. Estimated to be between one and two feet in height, with sharp teeth and little neck, the Nirumbee are considered enemies by the native peoples. Depicted as often engaging in harmless mischief, the Nirumbee are also considered responsible for evil acts such as child abduction and the killing of livestock. Similarly, the Pukwudgies – or person of the wilderness – of Algonquian folklore are a knee-high race of little people. Considered by some tribes, including the Ojibwe, to be harmless spirits of the forest, other tribes such as the Abenaki believed the Pukwudgies to be dangerous foes with a predisposition towards the theft of children and possessing powers similar to those of the magical skin-walkers.

The wendigo (or windigo) is a supernatural cannibalistic monster believed by several Algonquin tribes – including the Ojibwe, Saulteaux, Cree, Naskapi, and Innu – to reside in the forests of the Atlantic Coast and Great Lakes regions of North America. Appearing with some human characteristics, or according to a minority of interpretations an evil spirit possessing a human into monstrosity, a wendigo is typically created through human cannibalism or by an individual overcome with avarice and greed. Described as extremely gaunt and emaciated, with grayish skin, sunken eyes, tattered lips, and possessing a deathly odor, the wendigo greedily feeds on human flesh. However for each person it consumes the monster grows ever larger, so that it is always hungry and hunting; as such the legend is generally associated with stories of insatiable gluttony and gratuitous murder.

It is increasingly considered by anthropologists that the wendigo existed as much as a metaphor as a literal monster within native mythology, with the concept described as an early depiction of “social cannibalism” and applicable to any individual or idea which expresses a relentless drive towards unnecessary consumption and greed; in so doing, the story didactically encourages cooperation and moderation and discourages the taboo activity of cannibalism during harsh winters. Threatening the stability of a tribe’s existence and exhibiting a destructive nature, the allegory, coinciding with the ongoing eradication of native populations and the emergence of an early consumer capitalistic society in North America, is evident and telling, with the violent and unnatural wendigo symbolically representing the exclusion and forced assimilation experienced by disregarded natives via encroaching and expanding American colonialism in pursuit of Manifest Destiny.

15. Two-Face is a monstrous being who murders his victims with his razor-sharp elbows

Existing among the Sioux, Plains, and Omaha tribes, Two-Face (also known as Sharp Elbows) is a two-faced monster who enjoys preying upon natives populations, torturing and gruesomely disfiguring his victims before murdering them. As typically depicted in folklore all who gaze upon either of the twin visages of Two-Face become paralyzed by fear, or in some cases die instantly, and he utilizes his extremely sharp elbows to stab his frozen victims to death. As with several Native American monsters Two-Face is widely considered to retain a preference for children and female victims, especially pregnant women.

According to Lakota mythology Two-Face was once a woman who was turned into the creature as punishment for attempting to seduce the Sun god, with one beautiful face and one hideous; an alternative origin story includes a similar background, albeit with Two-Face being born from such an adulterous woman. This duality, as with several native stories seeking to impart a didactic lesson, is widely regarded as representing a disconnection from and disharmony with nature as an allegorical advocation of traditional conformity within the tribe.

16. The Perverted Merman hides in rivers and watches women as they bathe

N-dam-keno-wet (also known as The Perverted Merman) is a creature which recurrently appears in Algonquin mythology, specifically that of the Abenaki people. Described as half man and half fish, with a child-like human face, N-dam-keno-wet lives in streams and lakes where women regularly wash themselves. Unlike other native “monsters”, N-dam-keno-wet does not seek to harm these women or to scare them, merely to voyeuristically watch them; some traditional stories do include attempted molestation, but for the most part the “perverted merman” is just that: a pervert.

Mermaid-like creatures are a staple within Native American mythology, with several Algonquin tales including characters who disobey their parents being turned into similar creatures. Consistent throughout these depictions in native legend, the theft of a merman’s or mermaid’s clothing strips the being of their magical powers and renders them unable to swim.

17. Similar to the Wendigo, the Wechuge is a giant cannibalistic monster from Northwestern Canada

A wechuge, similar but not identical to a wendigo, is a cannibalistic monster stemming from the stories of the Athabaskan people of Northwestern Canada. According to legend the wechuge is a person who has become possessed or overpowered by the spirit of a great animal, in so doing devolving into a giant bestial form. Some versions of the wechuge depict the creature as being physically made from ancient ice come to life to hunt humans, invulnerable to harm and only defeated when melted over a campfire; this rendition of the wechuge is notably similar to that of the Wabanaki’s “Chenoo”: an ice giant who was cursed by the gods for his crimes, his heart turned to ice and his spirit trapped inside a troll-like monster that feasts upon humans. Described as giant animals, both intelligent and physically powerful, the wechuge hunts humans and attempts to ensnare and devour its prey through cunning deception.

As with the wendigo, certain tribes adhere to a less spiritual origin of the creature but instead a product of human indulgence in taboos resulting in the physical corruption of the depraved individual. The Dane-zaa of the Peace River region in Western Canada for instance contend a wechuge is the product of breaking a strong cultural taboo, such as having a photograph taken with flash, listening to guitar music, or eating meat with fly eggs in it.

18. The Underwater Panthers lived in the Great Lakes and could control the waters of their domains

The Mishibizhiw (also known as the Underwater Panther or Great Lynx) is a legendary creature belonging to the mythologies of native inhabitants of the Great Lakes region of North America. A monster from the underworld the panther resides in creeks and rivers, hiding in wait to drown unsuspecting prey. Described by the Sioux as possessing a body shaped like a buffalo, albeit with paws allowing for rapid swimming, the Mishibizhiw has just one eye, horns – either a single horn in the center of its forehead, or a pair – dorsal fins, a spiked tail, and is covered in scales; because of the latter characteristics, it has been speculated that the Mishibizhiw is in fact derived from a prehistoric stegosaurus.

Feared by the Ojibwa as the cause of waves, whirlpools, and rapids, it was considered within tribal folklore that each lake might be inhabited by its own Mishibizhiw who controlled its conditions. Despite being mortal enemies of the Thunderbirds some native communities revered the creatures as symbols of great power and hunting prowess, whilst at least one tribe fearlessly employed Mishibizhiw as part of a children’s game similar to “tag”. According to an ancient Chippewa tale, the Mishibizhiw lived on an island of mud situated between two lakeside villages. Avoided by locals for fear of an evil spirit, two girls crossing one day encountered the monster. Cutting off the beast’s tail with an oar, the severed limb transformed into a solid piece of copper and became a talisman for good luck in fishing and hunting for their tribe.

Legends, Traditions and Laws, of the Iroquois, Or Six Nations, and History of the Toscarora Indians, Elias Johnson, Union Print and Publishing Co. (1881)

The Legends of the Iroquois, William Walker Canfield, A. Wessels Co. (1904)

An Introduction to the American Indian, Paul Pettennude (1996)

Oral Literature of the Indian Peoples of the Inland Northwest, Tom Yellowtail, University of Oklahoma Press (1999)

The Piasa: An Indian Tradition of Illinois”, John Russell, The Evangelical Magazine and Gospel Advocate (1848)

The Piasa: or The Devil among the Indians, Perry Armstrong, Morris (1887)