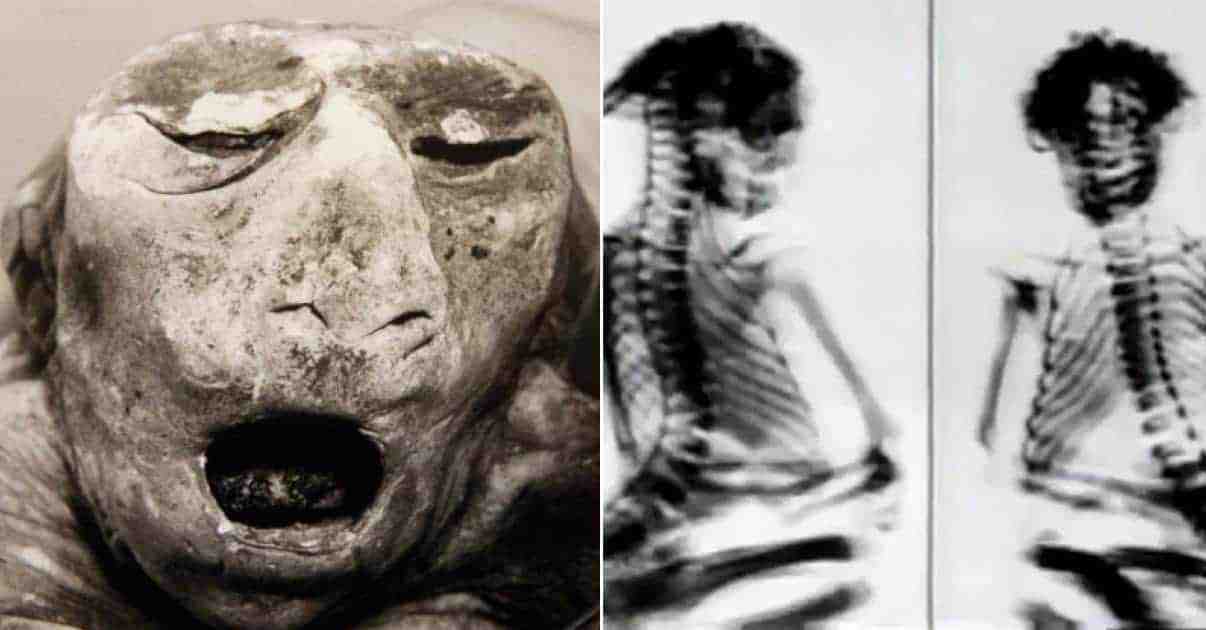 In July 1934, two miners in the San Pedro Mountains came across something rarer than gold. After blasting their way into a hidden mountain cavern, the miners discovered a diminutive human body, no more than 14 inches at its full height, naturally mummified by the Wyoming climate. The tiny mummy was unique. After the miners removed it from its cave, it was exploited as a spectacle by various local business Wyoming businessmen, before its mysterious disappearance in the 1950s.

Before it vanished, the mummy, which became known as â€˜Pedro’ was subjected to rudimentary scientific tests. However, its mysterious disappearance frustrated the solution of the most compelling mystery of all: was Pedro an adult or a child? For some of the experts believed Pedro to be the only preserved example of a lost Native American pygmy race, while others maintained the mummy was, in fact, the tragic infant victim of a rare congenital disorder. Attempts have been made using comparative evidence to answer these questions in the absence of the body. But is it possible to solve the mystery of the San Pedro mummy in its absence?

During the summer of 1934, Cecil Main and Frank Carr were mining for gold in the San Pedro Mountains. They were chasing a particular seam of gold when it disappeared into the rock face. The two miners had no choice but to blast away the rock to reach their goal. However, once the dust from the explosion settled, Main and Carr discovered to their disappointment that the gold had disappeared. Instead, they had found a small cave measuring no more than 15 feet long and 4 feet wide. Inside it, sitting cross-legged on a ledge, his arm wrapped around his torso was a most unusual find.

Main and Carr had discovered a diminutive human figure, no more than six and a half inches tall in its sitting position The withered creature had been naturally mummified by the environment, leaving it perfectly preserved. Its brown, wrinkled flesh remained intact- even down to its fingernails. However, its other features were curious. The head was covered with a gelatinous substance. Beneath this, the mummy’s facial features seemed unusual. The nose was flattened, as was the skull, which gave it a low, flat forehead. The mummy’s heavy-lidded eyes bulged, and its broad, thin-lipped mouth hid a full set of teeth.

The little mummy’s appearance was contradictory: childlike- and yet ancient. The two miners immediately recognized they had a phenomenon on their hands- one that people would pay good money to see. So they took â€˜Pedro’ as the mummy came to be known, 60 miles southwest to the town of Casper. And so Pedro’s career as a Wyoming â€˜sideshow’ exhibits began. The mummy passed through several pairs of hands until in 1936; it was on display in a drug store window in the town of Meeteetse. The drug store owner, Floyd Jones made good money from his unusual window display by selling postcard souvenirs. In this way, Pedro’s fame began to spread.

Eventually, Pedro returned to Casper, to the sales room of Ivan Goodman, a car dealer. Goodman showed the mummy off in a glass case, as part of his advertising display. “It’s educational! It’s Scientific! It will amaze and thrill you. It’s a pygmy preserved as it actually lived!” declared the posters accompanying Pedro, which claimed the mummy was thousands of years old and a progenitor of the human race. X-ray pictures of the mummy included on the posters were used to substantiate this.

The claim was nonsense. However, the x rays were genuine, for, by this time, Pedro had been examined by the American Museum of Natural History in New York, who had had their work verified by the Anthropology Department of Harvard University. These two institutes agreed that the mummy was no composite hoax as some people maintained, but a genuine, human specimen. However, the experts disagreed as to precisely what Pedro was. One theory is that he was, in fact, a baby suffering from a rare genetic condition: anencephaly. 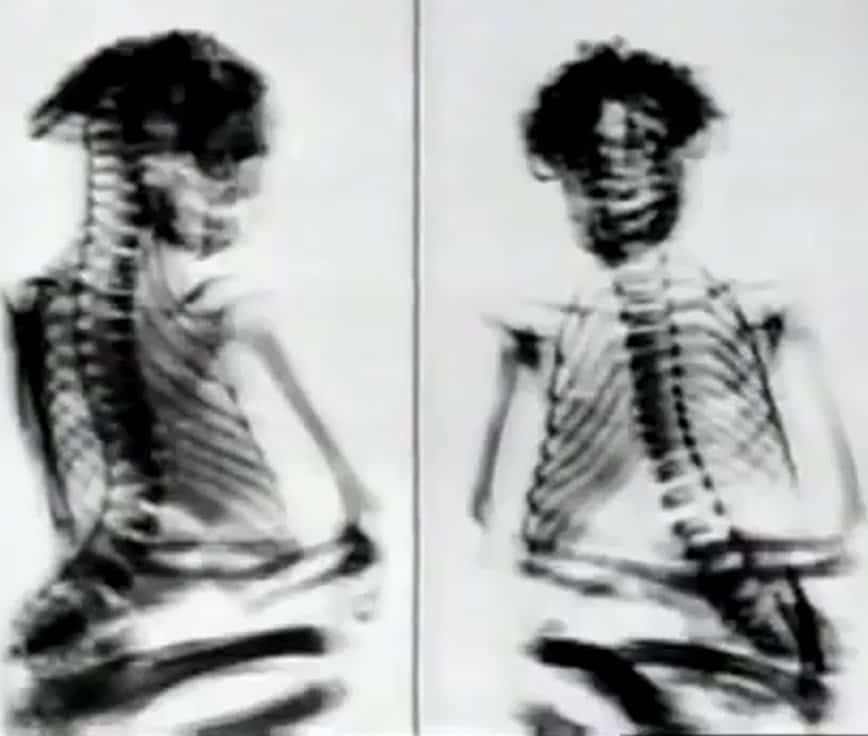 Pedro’s tiny size led many to believe he was the remains of a baby even before the experts analyzed him. Indeed some thought he was the corpse of a deceased child, stolen and modified to deceive the credulous. However, while the scientific tests proved Pedro was no means contemporary or a composite, several anthropologists from the University of Wyoming and Harry Shapiro of the American Museum of Natural History did believe him to be an infant.

Shapiro reputedly undertook the initial X-rays and a lung analysis of Pedro. From these results, he concluded that the mummy was, in fact, a baby suffering from Anencephaly. Anencephaly is a congenital disability that occurs in the womb and leads to the absence of part of the fetus’s brain, skull, and scalp. Even if a child suffering from such a disease survived birth, it could not survive infancy. Size aside, parts of Pedro’s skull did appear to be missing, leaving the brain exposed- compelling evidence in support of Shapiro’s theory.

In the 1950s, Goodman lost Pedro, probably to a New York con man and the mummy has never been recovered. Modern anthropologist George Gill continues to make a case for anencephaly, using the old evidence- and recent comparative material. Gill, who works for the University of Wyoming first became involved with the case of the San Pedro mummy in 1971. In the 1990s, after a TV appearance, he was approached by a Native American family who presented him with the preserved remains of a baby remarkably similar to Pedro.

The little girl, nicknamed Chiquita, was mummified just like Pedro. Measuring only inches in height, her arms and legs were also in the same position as the San Pedro mummy’s. “Nowhere else in Wyoming do we have burial sitting up like that. Never sitting up with legs crossed and arms folded across their chest,” said Gill. “There’s a clear connection between the two of them, besides being in the same region.” While Chiquita had not been set to rest in a cave (The family who protected her had kept her in their attic), the remains had never the less been precious enough to guard for 500 years.

For although Gill was only allowed to analyze Chiquita on three separate occasions, he was able to establish her date of birth as being sometime in the 1500s. Despite her blond hair, her DNA also revealed the little mummy to be of Native American origin. But most compelling of all, the anthropologist was able to establish that she died from anencephaly. The similarities to Pedro lend credibility to the anencephaly theory. However, without Pedro’s body, it cannot be proven he suffered from the same condition- especially as there is evidence that suggests Pedro was not a child at all.

Pedro’s full height has been estimated to be 14 inches in total- certainly the right size for a baby. However, he also exhibited features associated with a fully-grown adult. The mummy had a full set of teeth and x rays also revealed what appeared to be the remains of solid food in his stomach. Furthermore, there were signs on his body that he did not die a natural death. The mummy’s spine appeared to be damaged, his collarbone broken and his skull been smashed by a blow that could have resulted in the exposed brain tissue.

Some experts reconciled this discrepancy between Pedro’s size and development by declaring that Pedro was, in fact, an adult dwarf. Local Native American tales tell of a mythical race of little people– the Nimerigar who lived in the area of Wind River and the Pedro ranges of Wyoming. The legends say that the Nimerigar ranged between 20 inches and three feet in height. They were gifted with magical powers and the healing arts- yet were also extremely vicious, hence their name which means, “People Eaters.” As with European fairies, it was unwise to cross the Nimerigar who would attack those who displease them with poisoned darts.

The Nimerigar also reputedly killed off those in their community suffering from debilitating age or infirmity with a blow to the head-, which could account for Pedro’s head injury. This injury, taken in conjunction with Pedro’s size and unusual appearance has led to speculation that the mummy was a representative of a now lost race that inspired the Nimerigar legends.

Physical evidence for a race of small people exists in the US. In 1876, The Anthropological Journal and New York Times both reported on a six-acre graveyard of between 75,000-100,00 â€˜pygmy’s’ in Coffee County, Tennessee. The deceased were found to be “buried in a sitting or standing position.” Although they were first thought to be children, the skulls were found to have wisdom teeth, leading investigators to deduce they, in fact, belonged to “a dwarf tribe of people, about three feet high.” A similar find had also been reported forty years earlier from a site near Cochocton in Ohio.

However, none of these â€˜little people” have been found mummified or buried in quite the same circumstances as Pedro. The fact remains, no matter what the similarities are between the lost mummy, Chiquita, mythical or actual pygmy races, without the actual body of the San Pedro Mummy, the best anyone can do is speculate.