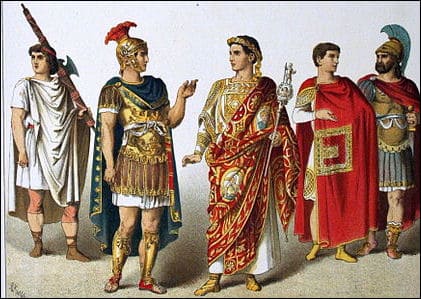 4. For the people of the Assyrian Empire, boys had to toughen up from an early age, but needed 15 years of hard training to become a man

At the height of its powers, from the 10th to 7th centuries BC, the Assyrian Empire stretched from Egypt right across to the northern borders of modern-day India. The huge ancient superpower was able to conquer large parts of the known world by building up a large army of skilled, fearless warriors. Under the rigid system, young males were not allowed to enjoy their childhood for long. Indeed, in order to make strong men, boys were ‘toughened up’ from an early age. Indeed, as soon as they were born, boys were taken away from their own fathered and raised solely by their mothers and other female relatives up until the age of five.

After their fifth birthday, a boy would then be expected to begin his military training. For the next 15 years, their lives would be dedicated to learning how to fight. Some would be trained in using a bow, while others would focus on fighting with a sword or spear. All would learn how to ride a horse well, and, according to the ancient historian Herodotus, the young men would also be drilled in the importance of always “speaking the truth”. Only once they emerged from the military academy at the age of 20 would the youths be truly regarded as men, with all the privileges and responsibilities that came with adulthood.

3. For the ancient Mongols, a boy would have to learn how to hunt with eagles before he joined the men of his tribe

For more than 6,000 years, men have been hunting with eagles on the steppes of Central Asia. According to the travel memoirs of Marco Polo, both Kublai Khan and Genghis Khan were masters in the art of berkutchi and had huge numbers of specially-trained hunting birds with which to enjoy their hobby. In the tough conditions of Mongolia, the practice has served as an effective way of hunting and providing food. At the same time, berkutchi has also served as a traditional coming-of-age initiation for Kazakh boys. Only by mastering the art and earning the respect and obedience of an eagle can a boy be considered a man.

Traditionally, a father would teach his own son the art of berkutchi. The boy would be given an eagle chick of his own to raise and train. The process might take several years and, since eagles are usually fiercely independent, it’s extremely tough. Once mastered, however, the young male can join the rest of the men in hunting expeditions. Moreover, he would also be able to take part in ancient Mongo games. Here, a man’s skill on horseback or with an eagle might win him not just the respect of his peers but possibly even a wife as well.

2. In ancient Korea, a simple change of hairstyle was for a long time a sign that a boy had grown into a man

In Korea, the earliest mention of coming-of-age ceremonies for young males can be traced back to the 10th century. This was a time when the Goreyo Dynasty ruled over the unified Korean peninsula. According to the records from the time, in the year 965, King Gwanjong gifted his son and heir an outfit that was usually worn by grown men. This gifting of adult clothing quickly came to be a popular method of showing that a boy had become a man. Then, over time, it merged with traditions imported into Korea from China and other neighboring cultures.

Later, during the Joseon Dynasty, which dominated Korea from the 14th to the start of the 20th century, coming-of-age ceremonies for middle and upper-class males became even more complex. Over time, the Chinese traditions of boys being given ‘adult’ hairstyles became increasingly commonplace. In particular, the Gwallye ceremony, which took place when a boy turned 15, saw the boyish long, flowing hair, tied up into a tight knot. This would symbolize to the rest of Korean society that the youth was now a man.

1. A young Samurai would be required to undertake a series of tests to prove he had grown into a man and a warrior

The Age of the Samurai started at the end of the 12th century and continued up until the mid-1800s. Over this time, the way in which a boy became a man evolved. While some parts of the initiation ceremony remained constant over the centuries, others – above all, the age at which a boy made the transition to adulthood – varied significantly. Since adult men were expected to fight in open battle, parents understandably tried to delay the day when their sons were no longer regarded as boys. As such, at times of war, the rites-of-passage might not happen until the age of 20.

In times of peace, however, it sometimes dropped as young as 12 or 13 – especially if a family wanted more children since only adult Samurai were permitted to marry. The coming-of-age ritual was known as Genpuku. Unlike many other warrior cultures, the Samurai never required young boys to undertake feats of strength, bravery or endurance in order to be seen as grown males. Rather, Genpuku was all about the symbols. Youth would be given a Samurai helmet, to be worn in place of the cloth cap of boyhood. He would also be presented with his own body armor and, most importantly of all, his Samurai sword.

“Kenya’s Maasai break with coming-of-age tradition to save the lion.” Reuters, December 2016.

“Australian Aboriginal – Initiation and Mourning Rites of Passage.” The University of Idaho.

“Coming of Age in Ancient Greece.” The Onassis Foundation.