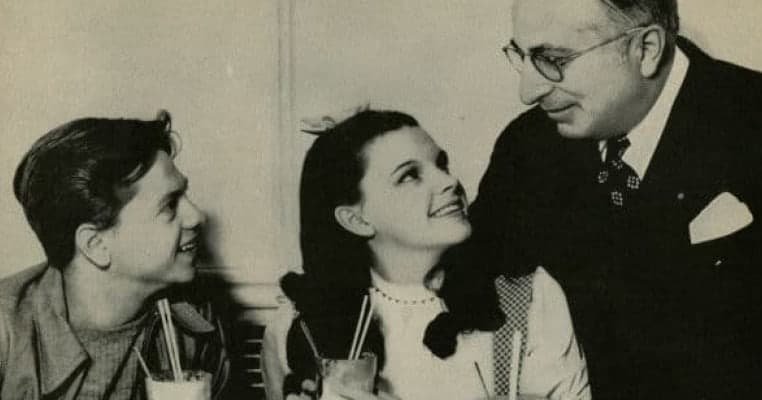 14. Henry Willson built a career upon the sexual abuse and blackmail of young men

Henry Willson first worked in Hollywood as a reporter and writer for gossip magazines before starting his own agency after working for a time for Zeppo Marx as a talent manager. Willson, who was gay, sought out young wannabe male actors, or simply young gay men who caught his eye whom he then convinced they had the talent to be actors. Among his recruits was a truck driver named Roy Scherer. Willson changed his name to Rock Hudson. Another was a Navy veteran named Robert Moseley, Willson renamed him Guy Madison. Willson was unable to seduce Madison, according to the latter’s biographers, and shifted his attention to another veteran, Arthur Kelm, renamed Tab Hunter.

When Willson’s prodigy Sherer/Hudson found stories of his personal life to be in the hands of the tabloid Confidential, Willson offered the gossip magazine stories of Kelm/Hunter’s gay social life for publication instead, protecting his most valuable client’s earning power. Hunter later revealed in his autobiography that well publicized affairs of his with Debbie Reynolds and Natalie Wood, as well as others, had been fabricated by his manager in order to shield the fact of his sexual preference. His preferences were well known however, and an insiders joke of the 1950s was that “Natalie Wood and Tab Wouldn’t”. Willson demanded that his client keep up the charade in order to keep working, a demand he also imposed on Rock Hudson, and other clients. It was Willson who first suggested Rock Hudson marry Phyllis Gates, and he insisted Rock keep up the charade of macho heterosexuality in order to continue working.

15. The Perils of Show Business – a warning to young women – was first published in 1956

Picturegoer was a British film fan magazine, noted for its inclusion of photos in the style which became known as cheesecake in the 1950s, which warned of the dangers young women faced in the film industry in a 1956 article, The Perils of Show Business. The authors – both male – introduced the article by calling it “the most depressing story we have ever written”. The article, besides describing the predatory behavior of film producers, financiers, directors, and actors, also described the various means adopted by young aspiring actresses to thwart the romantic intentions of their mentors and bosses. Still, the biases of the time are present, one subheading of the article warns readers not to blame the men, and warned that some young actresses offered themselves freely, thereby complicating matters for all.

The Hollywood studios and the studio system was in its death throes by the time the Picturegoer article appeared in print, though the great publicity machines still existed and still produced their self-defending flack with abandon. The 1950s were considered to be an innocent age, when America had only recently asserted its virility and moral virtue, and within a short time the existence of the casting couch and the attitudes towards women exhibited by male Hollywood were relegated to the role of gossip and fiction. Warnings such as The Perils of Show Business and similar articles were considered to be salacious tripe created by gossip magazines, as were the whispered suspicions that a man as masculine and handsome as Rock Hudson could possibly prefer boys over the adorable and virginal Doris Day. The desire to remain ignorant went a long way toward preserving sexist behavior in Hollywood, as well as everywhere else.

16. The male dominated studios forced numerous female stars to have abortions for reasons of image

The Hollywood studio system, besides being dominated by men, placed a premium on the images of their female stars (and most male stars as well, as lavender marriages indicated). The studio heads were well aware of the many extramarital affairs conducted in the film community, at a time when divorce was still considered scandalous by most of middle America, the primary source of Hollywood’s profits. Divorce was scandalous enough, but divorce as a result of extramarital indiscretion was worse, and pregnancy outside of marriage was most scandalous of all. Married film stars who impregnated female stars were protected, whether the woman was married to another star or not, by the pregnancies being kept hidden from the public. Abortions, which were illegal in most jurisdictions and considered immoral in nearly as many, were often ordered by male studio heads, though just as often they were arranged at the request of the pregnant (but not by her husband) actresses and stars.

Talullah Bankhead is often cited by gossipmongers or others with an agenda as having been forced to have abortions by distressed studio heads, but biographer Lee Israel (who was later convicted of forgery in an unrelated case) wrote that Bankhead had several abortions. Israel compared their frequency to trips to a hairdresser. Ava Gardner later told an interviewer that the studio would penalize her financially for having a baby, and that when an abortion was arranged, by the studio and to take place overseas in London, a representative from her employer accompanied her to ensure that it remained hidden from the press. The list of actresses from Hollywood’s Golden Age who had abortions reads like a who’s who of the great film stars of the age, and while many abprtions were the choice of the film star, many others were demanded by the studio, with the star’s career threatened if they did not comply.

17. Was the Barbie doll created as a Hollywood image of the perfect woman?

The Barbie doll, a seemingly harmless toy designed originally to accessorize the fantasies of pre-adolescent girls, has been condemned by feminists and others as objectifying women, warping the minds of the young into envisioning an impossible image of feminine pulchritude, and a host of other heinous crimes. Its designer was a gentleman by the name of Jack Ryan – no relation to the character of the same name created by Tom Clancy and portrayed onscreen by Harrison Ford, Ben Affleck, Alec Baldwin, and others. Mr. Ryan worked with Ruth Handler, whom toymaker Mattel credits with inventing the doll, named for her daughter of the same name (Handler was married to one of Mattel’s founding partners). Ruth also had a son named Kenneth, who later had a doll named for him as well. Hence the namesakes for Barbie and Ken were brother and sister, not boyfriend and girlfriend.

Ryan was also once married to Zsa Zsa Gabor, the sixth of her eventual nine husbands (among then hotel magnate Conrad Hilton, great-grandfather of Paris Hilton). Ryan was also, according to the offended Gabor, innocent that she clearly was, a womanizer with a taste for women who possessed physical attributes which he designed into the famous doll, and eventually her plastic female friends as well. Ryan was accused, in life and after death, of promoting his sexist beliefs through the marketing of Barbie dolls and the fantasy lifestyle the doll promoted in young and impressionable girls. Ryan was active in the Hollywood social scene while married to Gabor (January 1975 – August 1976), after which he faded into relative obscurity. Whether Barbie and her friends are a product of Hollywood sexism is up to the eye of the beholder.

18. Hollywood protected male actors guilty of less than gentlemanly behavior, including one who later became President of the United States.

The Hollywood system presented the escapades of male actors – both onscreen and in real life – with a decided boys will be boys attitude, which was more a reflection of the public mores of the time than a direction offered by the filmmakers of the day. The proclivity of the gentlemen of Hollywood for patronizing brothels was kept hidden as brothels were by then considered immoral by mainstream America, which nonetheless recognized that real American men were driven by masculine desires towards certain behaviors, often as not the result of being led on by women. Errol Flynn’s sexual conquests were often viewed by women through eyes glistening with lust; by young men with eyes glittering with envy, and the expression In Like Flynn was coined to describe the star’s effortless good fortune.

Other stars took advantage of the moral standards of the day, and when things went too far they could count on the studios’ financial muscle to protect them. Starlet Selene Walters, (who never enjoyed much of a film career, though she later claimed some fame as a Hollywood columnist) later informed an interviewer that actor Ronald Reagan’s romantic overtures were unwelcomed by her in the 1950s, and that the actor was insistent to the point of an actual rape. She revealed the story after Reagan’s presidency, and when conservatives recoiled at the image of Reagan as a rapist and denounced the story as utterly false, others stepped forward with similar tales. Among them was actress Piper Laurie, who claimed that she was seduced by the married Reagan (she did not claim rape) while still a virgin and while she was making a film with him in which he was portraying her character’s father. In both instances, the accusations were silenced by the actions of studio moguls, and Reagan’s character remained untarnished.

“What Women Want: The Complex World of Dorothy Arzner and Her Cinematic Women”. Donna Casella, Framework: The Journal of Cinema and Media. 2009

“Lion of Hollywood: The Life and Legend of Louis B. Mayer”. Scott Eyman. 2005

“How Judy Garland was forced to starve herself for the screen”. Bee Wilson, The Telegraph. August 29, 2014. Online

“My memories of the Golden Age of Hollywood”. Pauline Wagner McCourtney, Historical Society of the Crescenta Valley. April, 2010

“The monster of MGM: How Louis B. Mayer terrorised Hollywood’s women long before Harvey Weintstein”. Alice Vincent, The Telegraph. October 10, 2017