16 Incredible Ancient Creation Stories from Around the World

16 Incredible Ancient Creation Stories from Around the World 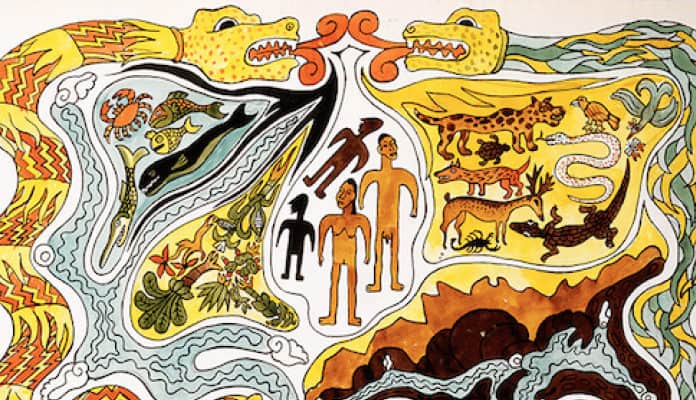 Creation stories often form the basis for many religions around the world; many are well known even among those who do not practice the religion. Others are obscure and unusual, utilizing strong story telling techniques to explain complex moral and spiritual quandaries. Regardless of the creation story’s popularity, they all seek to explain the same things: where did we and everything we see come from and why? Below is a list of the top most fascinating creation stories found throughout the world, many from religions that are still practiced today. There are many variations and iterations of these legendary tales, so the content may vary from source to source.

1. Proto Indo-Europeans had various creation myths, but most involved a giant feeding from the primal cow named Auðumbla.

Ymir is the personification of chaos before the creation. He was the first being in Norse mythology, arriving much sooner than other well known Nordic gods, such as Thor or Odin. Ymir inhabited a void, Ginnungagap, where no fertile land or water existed. However, with nothing to nourish Ymir, he had to be fed from the udder of Audhumla, a primal cow who was formed from dripping ice. While he was feeding, two other giants were formed asexually from the sweat of Ymir’s armpits and a third giant was formed from Ymir’s legs.

Audhumla, the primal cow, was fed by a salt lick that contained Buri, the first of the Old Norse god. As she licked, Buri was freed and Buri then produced a son. Buri’s son Borr mated with Ymir’s descendant Bestla. Borr and Bestla’s union produced Odin, chief of the Old Norse gods. Odin was unhappy with Ymir’s ability to create offspring, and decided to dismember Ymir. Ymir’s body parts then became the substances that created the cosmos. The unnamed collection of anonymous Norse poems, the Poetic Edda contains Grímnismál or “Song of the Hooded One,” artistically wording Ymir’s demise:

From Ymir’s flesh the earth was created,
And from his sweat [or, in some versions, blood] the sea,
Mountains from bone,
Trees from hair,
And from his skull the sky.

And from his eyebrows the blithe gods made
Midgard, home of the sons of men
And from his brains
They sculpted the grim clouds.