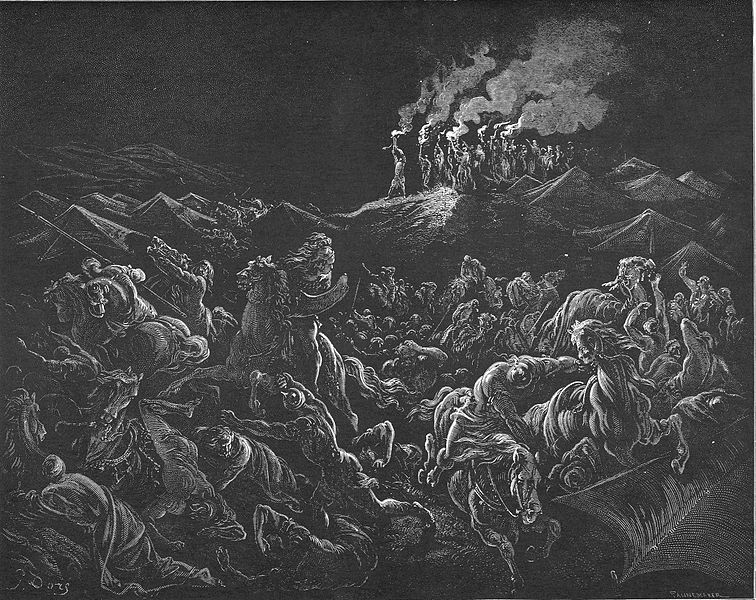 10 Wars of the Old Testament

Wars of the Bible

The accuracy of the history described in the Old Testament and the Tanakh, the Hebrew Bible, has long been debated. There are those who believe that the Bible is a one hundred percent factually accurate rendition of history, written as it occurred, and the stories of the Bible are not legends and sagas, but facts. To them, the evidence which calls any of the events described into doubt is what is fabricated. Archaeology, conflicting history, and lack of physical evidence of an event taking place are of little concern to them, secure in their belief in the words of the book, and that is their privilege.

Most of the Hebrew Bible, which is the basis of the Christian Old Testament, is considered to be non-chronological in many sections. The third-century Talmudist and teacher Abba Arika created the system of study which led to the creation of the Talmud, and established that the Torah was not in chronological order. The Bible presents several histories, that of theology, narrative history, political history, and the development of a people over a period of many centuries, to name just a few. Much of the authority for the accuracy of the events recounted was the belief that it was written by those who witnessed the events.

The truth now known is that they weren’t in most cases. The Book of Joshua was not written by Joshua, many of the books describing the wars of Jewish history in the Bible were written long after the events which they describe. During the conquest of the lands of Canaan mass exterminations of cities and towns are described in the Bible, only to find the same cities and towns well-populated and thriving less than a generation later. The Books of Samuel contain both historical information and that is known to be derived from ancient legends, as well as anachronisms which preclude it being written in the eleventh century BCE, the time period it describes.

Among these are types of armor which did not appear for several centuries, horsed troops riding singly (cavalry) rather than in chariots, the use of iron picks as if they were readily available, and a reference to a people, the Kushites mercenaries which were not common in the era of Samuel, but were common three centuries later, which is also true of the other above items. The inference is that Samuel was written three hundred years after the events it describes, and thus the author or authors was not a witness to the events, even taking into account the extraordinary life spans attributed to earlier figures described in the Bible.

The wars of the Bible and the events leading up to and following them include homicide, suicide, fratricide, patricide, matricide, genocide, rape, incest, enslavement of peoples, the destruction of cities and towns, and virtually every atrocity which is possible for humans to commit upon each other. They went on, according to the biblical accounts, for thousands of years, in a tiny area of the globe occupied by the descendants of the patriarchs. Since then nearly every nation which has gone to war has done so in the belief that its god is on their side, part of the justification for going to war in the first place.

Time Magazine – Why Do People Build Walls? The Real Story of Jericho Offers a Surprising Answer

The Torah – The Story of the Concubine at Gibeah: A Satire on King Saul

Haaretz – Meet the Real King David, the One the Bible Didn’t Want You to Know About

BAS Library – Sennacherib’s Siege of Jerusalem: Once or Twice?

Haaretz – Who Really Wrote the Biblical Books of Kings and the Prophets?

“The Quest for Historical Israel: Debating Archeology and the History of Early Israel”, by Israel Finkelstein, 2007

History Collection – 18 Ways the Bible has Changed throughout History