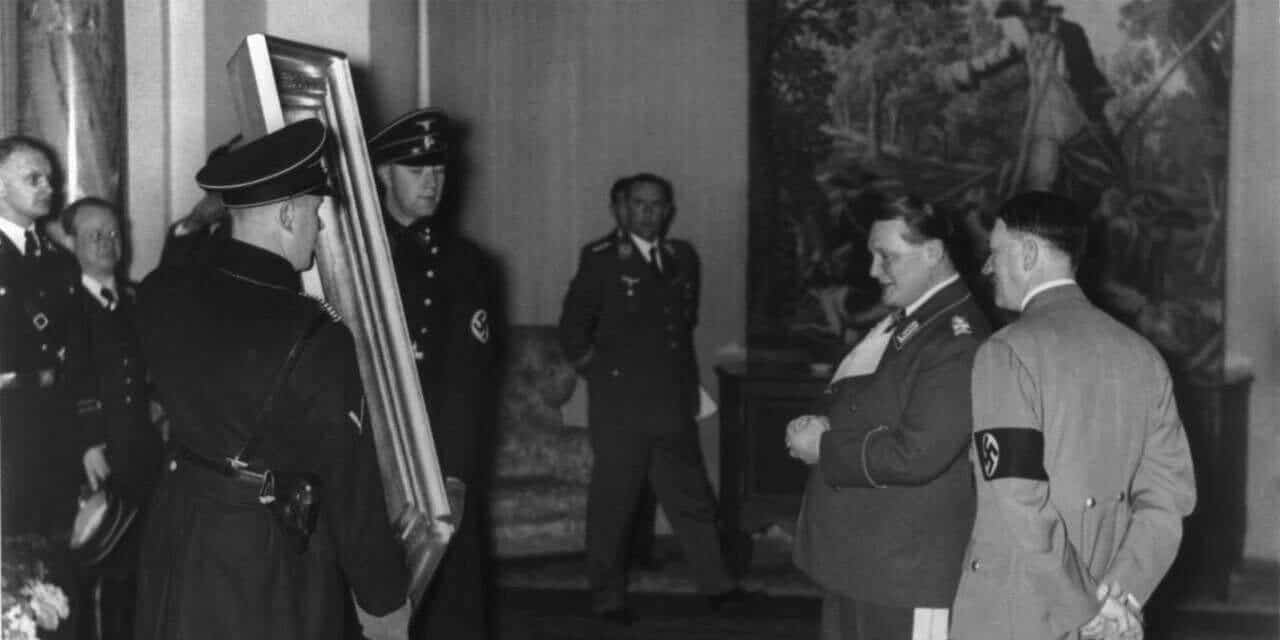 Canaletto was an Italian painter from 1697 until 1768. He was the son of a painter Bernardo Canal and became known for his paintings of Venice. Many of his landscapes of the city were said to be very evocative. His paintings became highly prized during the earlier part of his career. But later on, his paintings began to suffer from repetitiveness from doing the same paintings in England and Venice to appease his followers. His art began to suffer to the point that people began to suspect that his paintings were not really painted by him.
Near the end of his career, he started to paint in public to prove the paintings were his own, but he never managed to recover the reputation he once had. However, that never stopped his earlier work from fetching high prices from nobles and monarchs alike. This painting was of the Piazza Santa Margherita in Italy and features the character and style that Canaletto was known for.

The painting was part of the private collection of Jewish art dealer Jacques Goudstikker in the Netherlands. In 1940 he attempted to flee the Nazis but he ended up falling while on board the SS Bodegraven and fatally broke his neck. This left his massive art collection to be looted by the Nazis. More than 1,100 known paintings were taken but many others may have been part of the collection as well. Some of the art has been returned or payment given to the sole remaining heir of the Goudstikker fortune but this painting has yet to surface.

The Boulevard Montmartre at Twilight by Camille Pissarro

Camille Pissarro was a Danish-French painter from 1830 until 1903. He was known for his contributions to the impressionist and post-impressionist movement. He loved to paint outdoors and capture the reality of life in the villages. He enjoyed painting the French countryside and would complete paintings in one sitting, staying outdoors for the entire duration. His art took on a more realistic look, which some found vulgar in that he would include bushes that were not perfect or plants that were still growing.

His middle years became more and more impressionist and the reason for which he was known as one of the fathers of impressionism. His much later years returned to a more realistic style and of painting the peasants and the French countryside. As he neared his final years he developed a recurring eye infection that prevented him from working outside during colder temperatures. Therefore, he would rent out hotel rooms so that he could paint out the window.

Pissarro ended up doing several pictures of the Boulevard Montmartre at different times of the day and different seasons. This particular painting of the Boulevard Montmartre features the street at twilight and the perspective suggests that it might have been painted as the view from his hotel room. This painting was looted by the Nazis and was later sold through a Swiss art dealer in 1941. There have been rumors that his painting has re-emerged a few times since the end of the war but there are no definitive leads about where the painting might be today.

The Painter on the Road to Tarascon by Vincent Van Gogh

This painting is also referred to as the Painter on his Way to Work. It is a piece that featured a painter laden with canvas and art supplies. The painter walks through a leaf-laden path amidst a backdrop that is filled with the colors of fall. The painting features all of the artistic techniques that Vincent Van Gogh was known for and was even recreated by Francis Bacon. It was painted in 1888.

The painting’s fate is largely unknown although many believe that it was destroyed. This painting was in the Kaiser-Friedrich Museum as part of its collection. The museum is now known as the Kulturhistorisches Museum. The museum is near Magdeburg, Germany and the museum was the one to report the painting’s destruction.
The painting was claimed by the museum to be stored in the Stassfurt salt mines art repository. On April 12th, 1945, the Allies bombed Magdeburg and many believe that the resulting fires and destruction caused the destruction of this painting. After the bombing, a fire swept through the salt mines and destroyed all the art that was said to be stored there. It was previously thought that all the art stored there by the museum for protection was gone. But one painting from the museum has since resurfaced since the war leaving others to believe that there may be more out there. Perhaps the Painter on the Road to Tarascon still exists somewhere.

Five Dancing Women is a pastel painting by Degas that features the subject for which he is best known. More than half of his works feature dancers and they were the subject that he most identified with. Done sometime in the late 19th century, this pastel piece of art depicts five beautiful ballerinas. The dancers appear on stage mid-performance. Degas is considered by many to be an impressionist despite the fact that he thought himself to be much more of a realist.

In 1944, Hungary an ally of Nazi Germany not only began forcing all Jews to register their art but also began sending them to Nazi death camps. The Herzog family attempted to save their art by hiding in the basement of one of their factories, but it was eventually discovered. Andras was sent to a work camp where he later died, but his daughters did manage to escape.

Today a significant portion of the Herzog collection is on display in various museums throughout Hungary. The family has filed suits to try and get the art back but to no avail. There has also been no information on what happened to this Degas work but it has not appeared in any museums in Hungary. The art was divided soon after it was found with some of the art staying in Hungary and some being sent to Germany.

Portrait of a Young Man by Hans Memling

This painting by Hans Memling was done sometime in the 15th century. Hans Memling was a painter who became popular in Italy for his portraits which feature landscape backgrounds. Memling became so prosperous through his art that he was one of the richest citizens of Bruges in 1480. However, his wealth and popularity declined somewhat after that. The Romantics and the Victorians who would come later would consider the work of Han Memling the best that medieval art had to offer. His work became very prized in later generations.

This painting is relatively small, measuring about 14 inches by 9 inches. It is a simple oil on panel and does not feature the landscape background that Memling became known for. But it does feature the skill and elegance that made him a focal point of art during his time and afterward. This painting was the property of the Uffizi Gallery in Florence, Italy at the time of the war.

It was stolen by Nazi soldiers of the 305th infantry division who took it from the Catello di Poppi sometime around August 22nd, 1944. The painting was loaded onto a truck and made a stop in Forli, Italy on August 31st, 1944. After that, the 10th Army truck which contained this painting and many others continued north and was never seen again. No one knows what happened to the truck or what its destination may have been.

In 1963, two paintings by Antonio del Pollaiolo which were stolen from the Uffizi at the same time as the Memling turned up in the possession of a German waiter in California. This has led some to hope that the Memling might still be around in someone’s possession. Part of this hope comes from the size of the painting in which it could have easily been taken and hidden under someone’s coat, especially a German soldier hoping to make money from the art after the war.

Vase of Flowers by Jan van Huysum is one of a number of works that he did of flowers, many of which had similar names. So information on this specific painting is hard to find but it features all of the same elements of Jan van Huysum’s still life pieces. His early work was inspired by his father who was also a still-life painter and Jan van Huysum would travel to horticultural centers in order to be able to feature rare flowers in his art.

Jan van Huysum was from the Northern Netherlands and much of his work is from the late 17th and early 18th century. Most of his works are flower still life paintings but he believed that he had the gift for landscapes. He painted several landscapes in his later years and both his still lifes and landscapes can be seen at the Louvre in Paris.

This painting was stolen by German soldiers during the war from the Palatine Gallery in Florence, Italy. Its last confirmed location was a hillside villa in Montagnana, Italy where it was being stored in 1944. The location of the painting today is not known but some investigators believe that the painting is currently in the hands of a private collector. However, getting the painting back to its original owners can be difficult due to the statute of limitations placed on recovering stolen property. Many European countries have signed agreements to help return stolen Nazi art to its original owners or heirs. One investigator believes that the painting is in the hands of a private collector in Germany where the statute of limitations on stolen property is 30 years, meaning that there may be no legal recourse to get the painting back.

Portrait of a Young Woman by Michelangelo Merisi da Caravaggio

This oil on canvas painting is relatively small at only 23 by 14 inches. It was part of the Kaiser-Friedrich Museum prior to the war. Michelangelo Merisi da Caravaggio was known for creating paintings that have a realistic observation of the people within them. He captures both photo-realistic representations of people but also the depth of their emotional state. His dramatic use of lighting in his paintings would greatly influence the Baroque paintings that would follow him.

Portrait of a Young Woman is no different from the rest of his stunning works. It features a beautiful young woman, nicely dressed and touching some flowers on her chest. The precision in her facial expression truly captured the personality of the subject matter. It has not been seen since 1945.

The painting belonged to the Kaiser-Friedrich Museum (now the Gemaldegalerie) in Berlin but was moved to the Berlin-Friedrichshain Flak tower repository. The painting was moved because the tower had reinforced concrete structures which were believed to be anti-aircraft and therefore a perfect place to protect the priceless artwork.

Smithsonian Magazine – The True Story of the Monuments Men

NEH – Monuments Men Foundation for the Preservation of Art

Singul Art – The World’s Most Famous Missing Painting: Portrait of a Young Man by Raphael

History Collection – 20 Incredible Works of Art that are Lost Forever