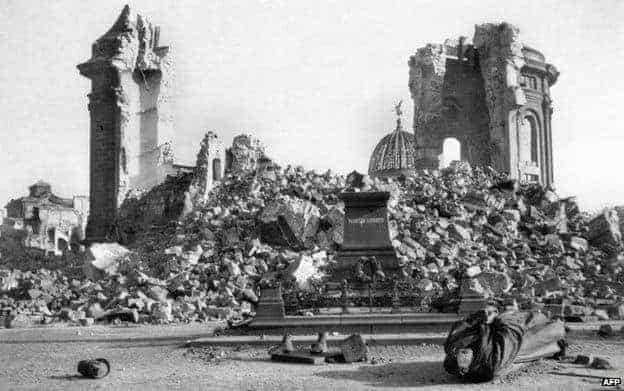 On February 13, 1945, American and British forces began a massive bombing on the German city of Dresden that continues to be a subject of dispute to this day. The two-day attack was entirely done by air; it annihilated the city, leaving large swaths of it utterly devastated. Widespread destruction resulted in around 25,000 deaths – the exact number of causalities is the subject of dispute. So much of Dresden was destroyed, it has been argued the number of those killed is much higher.

Delivering the attacks, the British Royal Forces (RAF) and United States Army Air Force (USAAF) covered the night sky with a constellation of aircraft. Over 1,249 heavy bombers were flown over Dresden. They dropped nearly two tons of bombs on the city – leaving only a small portion of the city center intact.

Germans questioned whether or not the bombing was necessary. By February 1945, the Second World War was very nearly over with only small details to be worked out. German forces were in tatters after the Battle of the Bulge. With very little energy left, they are follow-up attack on January 1, 1945, proved to be such an enormous mess. It was clear the Germans had little to no fight left. Their armies were still fighting hard, but they were also retreating on every war front being fought. By early February, Berlin was surrounded to the east and west. To the east, the Red Army was less than 60 miles away.

Churchill was informed two scenarios were likely to unfold. If the Soviets were able to successfully continue with their push against the Germans, Berlin would fall. In this case, the Second World War would end by mid-April. If the Germans held their position, they might gain an advantage. In this case, it was estimated, the war would continue until as late as October. Given that the German troops were surrounded, retreating on all fronts, and that Soviet troops were less than 70 kilometers from Berlin, a German collapse was likely imminent.

Two scenarios were offered to Churchill. The first was intended to throw all of Germany into chaos. The premise hinged on the idea that using Dresden as a target would cause confusion. For one thing, Dresden had not been bombed at this point. Also, it was located statistically at a useful intersection, linking Prague, Vienna and Berlin. Bombing Dresden was strategically sound for the most part. However, the way attacks were carried out and the sheer number of the bombings resulted in large-scale destruction.

Bombings were scheduled every three hours to interrupt emergency services as they began their efforts. Germans would be in the middle of putting out of a fire or tending to those trapped or hurt when another air raid would begin. The overzealous nature of the attack raised eyebrows. Churchill distanced himself from the air raids, despite being the only person at the helm overseeing and administering the plan. Over time, the bombing of Dresden has been compared to the Holocaust as a crime against humanity. February 13 will forever be up for debate concerning the acts carried out on this day in 1945.