You Won't Believe the Architectural Vision of a True English Eccentric 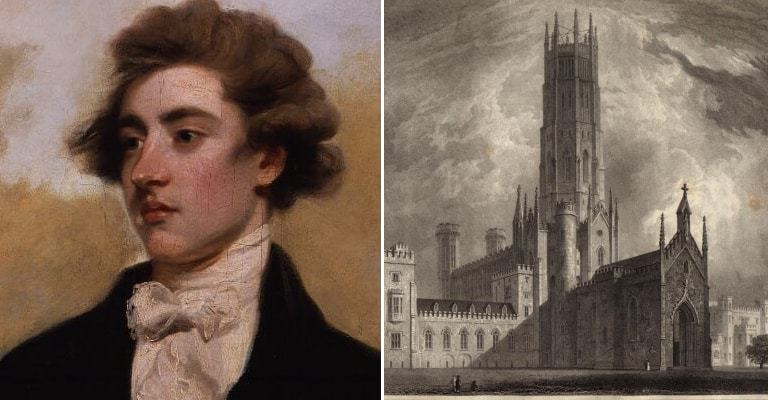 Between 1796 and 1813, one man doggedly pursued the building of the tallest edifice in Britain, despite the phenomenal cost of the enterprise and the tower falling down shortly after its first completion. The place was Fonthill Abbey, the home of William Thomas Beckford (1760-1844), the richest man in Britain. At its peak (before falling down), the tower of Fonthill Abbey stood at 91 metres, providing a visible landmark to Beckford’s immense wealth, profligacy and eccentric tastes. However, in pursuing so lavish a lifestyle Beckford ran into understandable financial difficulties, and had to sell the estate in 1822.

To understand the story of Fonthill Abbey, we must first understand the only man in the world who wanted it built, Beckford himself. Born at his family’s London residence in 1760, Beckford’s father was twice Mayor of London, and had accumulated a fabulous fortune through property, sugar plantations, and the cloth industry. His father’s wealth meant that the young William had only the finest education, and was widely-read in the Classics, foreign languages, physics, literature and philosophy. At the age of 10, his father died, leaving Beckford with £1 million (the equivalent of £125 million or $175.5 million today).

An only child, his inheritance also left Beckford with a vast annual income and the 6, 000 acre estate of Fonthill in Wiltshire. Beckford’s piano teacher was rumoured to have been Wolfgang Amadeus Mozart himself, and he was tutored in drawing by the prominent landscape painter, Alexander Cozens. To say that the boy grew up spoilt would be an understatement, and soon Beckford was committed to a life of self-indulgence and feeding his epicurean appetite for culture. For instance, he travelled Europe for fifteen-years accompanied by an entourage including his doctor, a baker, a cook, and twenty-four musicians.

Beckford was not content simply to accept the lavish accommodation on offer when he visited a new place. He would regularly have rooms repapered for his arrival, used only his own cutlery and plate, and once had a flock of sheep imported from England to improve the view where he was staying in Portugal. Whilst travelling, Beckford also built up an incredible collection of art. He had a particular fondness for Italian Quattrocentro paintings, which melded medieval and Renaissance styling, as well as Oriental art, buying the first piece of Chinese porcelain documented in Europe, The Fonthill Vase.

Beckford was bisexual, and was persecuted for his affair with William Courtenay, 9th Earl of Devon. The pair met when Beckford was 19, and Courtenay 10, and at some stage their intense friendship blossomed into romance. Seeing each other frequently at the Fonthill estate and Powderham Castle, the scandal came to light when love letters were intercepted and cruelly revealed in the national press by Courtenay’s own uncle, Lord Loughborough. Beckford was pressured by his family into marrying Lady Margaret Gordon, in what turned out to be a happy alliance, and the scandal forced him to go on his aforementioned-travels.

Aged just 21, Beckford wrote the Gothic novel Vathek: An Arabian Tale, demonstrating his great learning by doing so in French. Evidencing his great love of Orientalism, Vathek tells the tale of the titular Caliph, who renounces Islam to gain supernatural powers, assisted by his mother, Carathis. Vathek’s attempts to gain powers include the sacrifice of fifty children and others angered by the infanticide, the conjuring of spirits in a graveyard, and mixing serpents’ oil with powdered Egyptian mummies. Instead of succeeding, the novel ends with Vathek being dragged to hell and ‘wandering in an eternity of anguish’.

Many critics see Vathek as semi-autobiographical. The Caliph is immensely wealthy and, like Beckford, comes to inherit his father’s wealth and power at an early age. Vathek is similarly well-educated to his creator, with a great intellectual curiosity that is fed by his riches. We also see a thinly-veiled portrait of Courtenay as Gulchenrouz, an effeminate young man with a penchant for cross-dressing, who is rescued from Carathis and ascends to heaven. Tellingly, Vathek also constructs a huge tower, in his case to study astronomy and learn the secrets of heaven, anticipating Beckford’s own architectural activity at Fonthill Abbey.

The Building of Fonthill Abbey

After hiding from public disgrace on the continent for 15 years, in 1796 Beckford began to prepare Fonthill for his 1799 arrival. As well as being distant from the fashionable society of London, Beckford’s desire for seclusion is evident in his plans for what would become Fonthill Abbey. His first act upon returning was to surround the estate with a 7-mile long, 4-metre high wall crowned with vicious spikes. Turning his attention to the aesthetics of the estate, Beckford also ordered ‘a convent, partly in ruins, and partly perfect’ and a folly to be built next to the existing mansion.

With a huge art collection and the newly-acquired library of Edward Gibbon (author of The Decline and Fall of the Roman Empire), Beckford realised that he needed somewhere suitable to house them. Thus he hired James Wyatt, the leading architect of his age, to build a gothic mansion resembling a medieval abbey to rival the great spire of Salisbury Cathedral, which lay around 20 miles distant. Beckford demanded that Fonthill’s octagonal tower, in which he intended principally to live, be 91.4 metres high. Cunningly, he insisted that this first be built in wood to check that it was sufficiently impressive.

Despite delegating the work to the far better-qualified Wyatt, Beckford still insisted on being directly involved in the project. As you might expect, it suffered as a result. Wyatt was frequently absent, allegedly womanising and drinking heavily, and this provided Beckford with the opportunity to meddle uninterrupted. The first tower was constructed on the foundations of a summer house with shoddy materials, due to Beckford’s insistence that he eat Christmas Dinner there in 1800, which he did with the mortar still wet and structural beams barely in place. The kitchens collapsed as dinner was brought to the seated Beckford.

Rebuilding began immediately, but Beckford had not learned from his mistakes. The design itself was structurally unsound, but he would only accept a slight reduction in height, and continued to harangue his architect and workers to rush the job. He bribed the workers to work seven days a week with vast quantities of beer and food, meaning that construction of the poorly-designed tower was carried out by intoxicated men. This made him hugely popular with workmen, to the point that on one occasion 500 people working at Windsor Castle for King George III downed tools and came to Fonthill Abbey.

Beckford’s eccentric approach to the building of Fonthill Abbey was easily matched by his lifestyle whilst living there. However, the Abbey was not a comfortable place to call home, and suffered from its terrible design (largely due to Beckford): many rooms were higher than wide, poorly lit and ill-ventilated. Incredibly, Beckford lived there alone (his wife died in childbirth after only three years of marriage), occupying only one room for his purposes despite the vast number on offer. Unlike most hermits, Beckford lived in the opulent style that he had come to be known for and the house itself demanded.

For just as Beckford’s enormous tower resembled that built by his self-indulgent alter-ego, Vathek, so too did his lifestyle imitate his own art. Despite dining alone, he would occasionally order a banquet for twelve served by twelve servants, and eat only one dish before departing. He owned 20, 000 books, all bound in his personal style, along with paintings by Titian, Rembrandt, and Canaletto, and numerous sculptures and fine Oriental objets d’art. One of his servants was a Spanish dwarf, put in charge of opening the 38-foot-high front doors to guests in order to make them seem even bigger.

Apart from servants, the only permanent residents were his beloved dogs: Viscount Fartleberry, Mrs. Fry, Nephew, and Tring. Frequent billows of smoke were seen rising from Fonthill, and rumours spread of what Beckford was up to behind the enormous wall. One man scaled the wall to win a bet, and was shown around by a person he assumed to be the gardener. It was, in fact, Beckford, who invited the trespasser to a charming dinner before excusing himself, and later sending a servant to advise the man to be careful of the bloodhounds in the garden on his way out.

Behind the high wall, Beckford was also up to no good (by nineteenth-century standards). His servants at Fonthill Abbey were almost all nubile young men, to whom Beckford gave homoerotic nicknames: ‘infamous Poupee’, ‘Miss Long’, ‘Miss Butterfly’ (nineteenth-century slang for a catamite). It seems that he collected attractive young menservants as he did fine art, as he once remarked in a letter that ‘it’s cruel to hear of fair boys and dark Jade vases and not to buy them’. He was known to bathe with some of his servants, and complained of the frustrating frigidity of some of them.

Today, all that remains of Fonthill Abbey is a small, Grade II-listed, section of the north wing of the cruciform house. Just as this represents a sad and depleted remnant of a once-great house, so too Beckford has been largely forgotten by history. Yet Beckford left behind an impressive artistic legacy, and Vathek remains a titillating tale even today. Twenty of the artworks he loved so much are now in the National Gallery, London, and others are in the Metropolitan Museum of Art, New York. This eccentric, supremely talented, and unfairly oppressed man deserves to be better remembered.

Caufield, Catherine. The Man Who Ate Bluebottles and Other Great British Eccentrics. 2006.