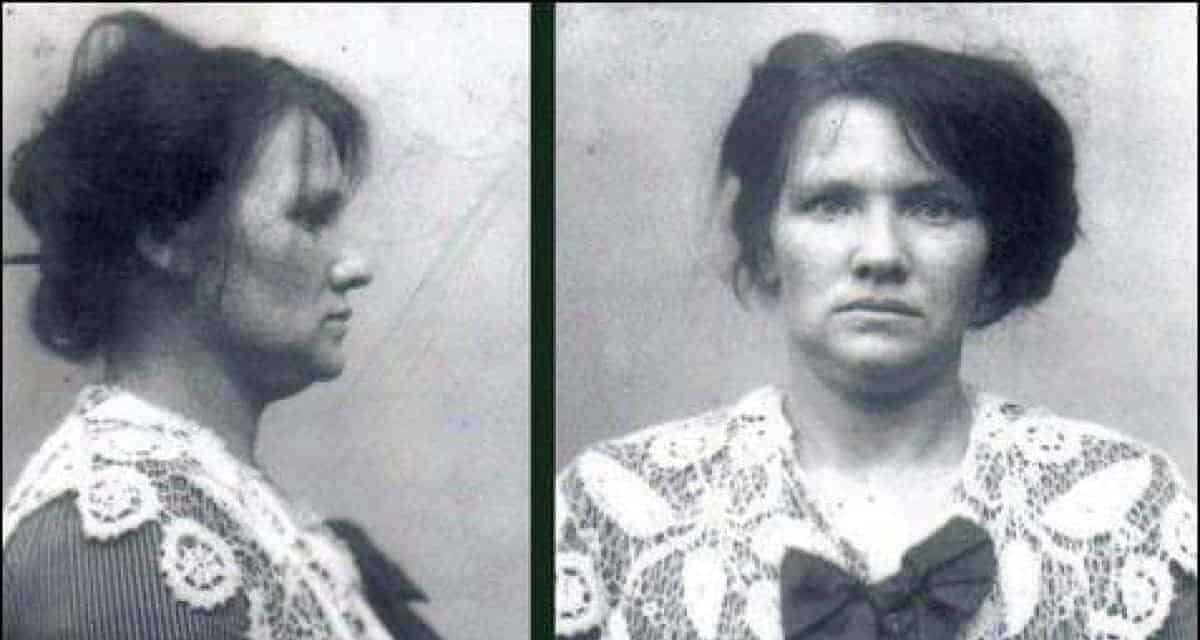 Danish serial killer Overbye murdered anywhere between 9 and 25 children during a seven-year period (1913-1920) although some historians believe the figure could be as high as 200. She was born in 1887 and little is known about her early life. Overbye worked as a professional child caretaker where she was supposed to look after children born outside of marriage. It was known as a â€˜babyfarm’ or an unofficial adoption agency, and it was the scene of her serial killing spree.

All of the murders happened in Copenhagen, Denmark and she killed the unfortunate victims via strangulation and drowning or else she burned them to death. Overbye buried and burned the corpses or else she hid them in the loft. There are scant details regarding her arrest in terms of how she was eventually caught. It is remarkable that she was able to murder so many children over such an extended period without arousing suspicion. Her trial was one of the most talked about in the history of Denmark and her actions resulted in changes to the nation’s childcare legislation.

During the trial, Overbye’s lawyer tried to defend his client by saying she was abused as a child. This cut no ice with the jury as she was found guilty of nine murders and the judge had no hesitation in sentencing her to death. Only three women received the death penalty in Denmark during the 20th century, but like the other two, Overbye’s sentence was commuted to life imprisonment.

After her arrest, over 180 children were reported missing from her â€˜baby farm’. There is a possibility that these reports came from parents who committed their own misdeeds and they sought to cover things up, but one has to assume that Overbye almost certainly killed more than 25 children. She never spoke about her reasons for murdering the children; perhaps she saw herself as a missionary whose job was to get rid of unwanted babies. Whatever the reason, Overbye took it with her to the grave as she died in prison in 1929.

The â€˜Old Lady Killer’ is the only living member of this list. The former professional wrestler murdered at least 11 women between the ages of 64 and 79, although some estimates go as high as 48 killings. Barraza was born in Epazoyucan, Mexico in 1957 and had a horrific upbringing. Her alcoholic mother apparently exchanged her for three beers, and the â€˜buyer’ repeatedly raped her. She became pregnant after one of these sexual assaults and had four children in total.

As an adult, Barraza forged a career as a professional wrestler and had the name â€˜The Silent Lady’ (La Dama del Silencio). She committed her first murder in the late 1990s (probably 1998) and embarked on her deadly spree until her arrest in January 2006. Barraza used to travel around public places and seek lonely elderly women. She gained their trust by either requesting a cleaning job or volunteering to help them with their shopping. For other murders, she pretended to be a nurse offering a free check up or a social worker looking to discuss elderly benefits.

Upon gaining access to their homes, Barraza proceeded to strangle her victims with tights, phone cables or a stethoscope she brought with her. After committing dozens of murders, she was finally apprehended on January 25, 2006. Barraza was seen leaving the home of Ana Maria de Los Reyes after strangling the woman with a stethoscope. Her trial took place in 2008, and she was found guilty on 16 charges including 11 separate murders.

Barraza was sentenced to 759 years in prison, but as sentences are served concurrently in Mexico, the maximum term is 60 years. Since Barraza was 50 years old at the time of sentencing, she will spend the rest of her life in prison. The exact number of murders committed by Barraza is unknown although she is linked to at least 32 deaths since 2003. Despite the evidence against her, Barraza has only admitted committing one murder; that of Reyes.