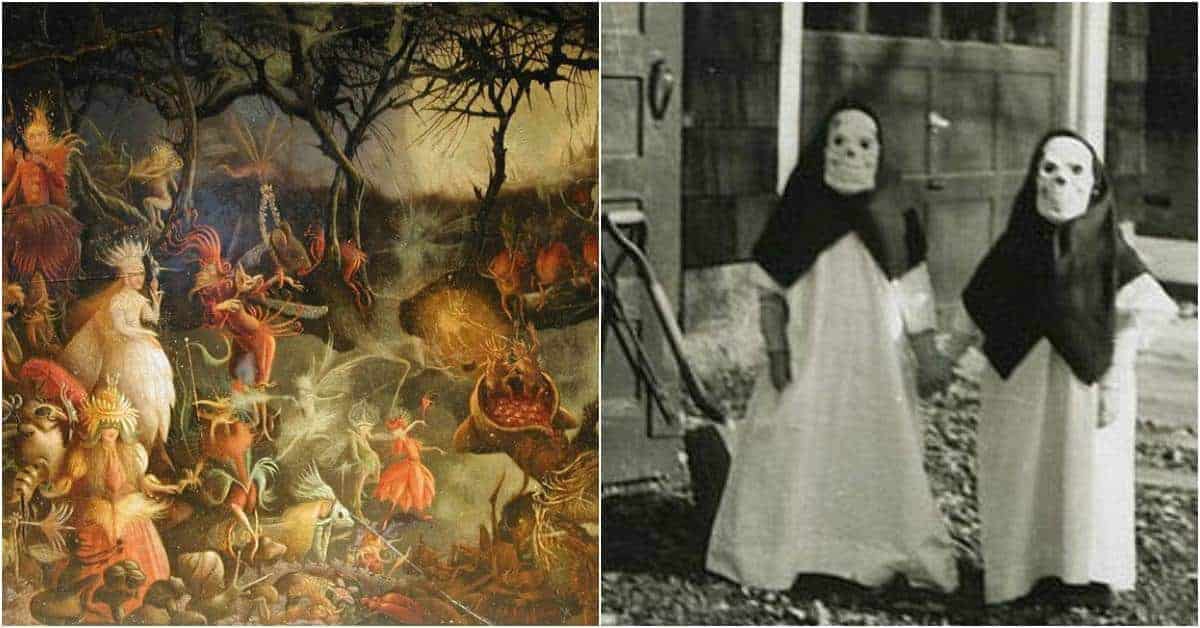 In 1030 AD, at the Abbey of Cluny in France, Odilo, it’s Abbott, instigated the first celebration of masses for the broader Christian dead. A resident of Cluny had been shipwrecked on an island while on pilgrimage. While he was stranded, he had a vision of souls in purgatory, suffering. So on his return to Cluny, he went to the abbot and asked that the monastery begin to say masses for all of the deceased. Thus, Odilio instigated an annual commemoration of prayers and offerings for the souls in purgatory in all his associated monasteries.

However, according to Professor Ronald Hutton in his Stations of the Sun, these first All Soul’s masses were not held in November but in February. February was yet another month where the Romans had traditionally held ceremonies for the dead: The Parentalia and the Feralia. These festivals were possibly the inspiration behind this original date.

The Parentalia traditionally began on February 13. It was a time for families to remember their deceased in a gentler way than at the Lemuria. Instead of driving the spirits of their ancestors away, the Romans visited their graves, bringing them offerings of wine and flowers and even sharing a family picnic with them. The Parentalia ended after just over a week later, and the Feralia, on February 21, was the ceremony that ended its events and closed the door between the living and dead for another year.

The Parentalia may have been gentler than the Lemuria. It was, however, just as crucial to the Romans. For its aim was also to ensure that the dead remained in their place. The Romans believed if they did not honor and remember the dead, they would return- with a vengeance. The festival’s traditional ceremonies at the graveside and attentiveness to the ancestors matched the ideals of Christian remembrance. However, the idea of pacifying potential vengeful spirits also suited the atmosphere of the ancient festival of Samhain. This similarity is probably why, by the end of the eleventh century, the date had shifted to November 2- the day after All Saints Day and became the closing stage of the season’s ceremonials.

7. From Soul Cakes to Trick or Treat

Purgatory was a central concept of All Souls Day. It was the hinterland of the afterlife where most Christian souls could expect to go after death. Neither heaven nor hell, purgatory was the place where the not wholly righteous served their time before they were finally deemed worthy of heaven. However, certain things could be done on earth to shorten the sentences of loved ones in purgatory. Masses could knock whole decades off a soul’s time there. But Masses were costly. So it became customary for families to dedicate as many prayers as possible to aid the souls of their ancestors.

Those who could not afford a full mass or who merely wished to buy extra prayers could recruit the poor to say prayers for them. And so the tradition of Souling was established. Now, instead of giving food to appease the spirits of Samhain, those who could spare it gave it to the poor in return for their prayers. This food often took the form of the soul cake: an oatcake sweetened with honey and marked with a cross. Each cake meant a prayer for a soul in purgatory.

But with the Reformation of the church in the sixteenth century, belief in prayers and masses for the dead were frowned upon. The reformers believed a soul could only earn salvation in its lifetime and so purgatory did not exist. But the custom of Souling did not abate- probably because for many poor people it was a useful way of gathering alms over the colder months. Now instead of offering prayers when they went door to door, the poor would sing for their supper, asking for ‘a pear, a plumb, a cherry’ with the added hint that if the householder gave the alms, the Soulers would stop making a nuisance of themselves.

And make a nuisance of themselves they often did, as many Soulers added pranks to their repertoire of door-to-door entertainment. Knock and run became a favorite prank, or else doors were pelted with cabbages. Livestock or goods could also be ‘misplaced.’ In Scotland, these pranks led to Halloween becoming known as ‘Mischief Night’ and laid the foundations for the later traditions of ‘Trick or Treat’ which developed in America.

8. Dressing up or ‘Guising’

Guising or dressing up in disguise was a practice that went hand in hand with Souling. In fact, it probably predated it, stemming as it did from the original Samhain festival. Initially, guises were to fool the spirits abroad at Samhain by making the wearer appear to be one of them -or at the very least unidentifiable, and so able to escape their ire. Later, disguises were assumed when souling door to door, based on characters associated with the season with the intention of hiding the identities of the guisers from neighbors, not any spirits of the season.

Some areas in Britain retained traditional guises that related to the Samhain beliefs. In Wales, people would cross-dress to confuse the spirits, blackening their faces and dressing in rags. Men, in particular, would appear abroad disguised as ‘hags’- an attempt to mimic some of the spirits abroad on Winter’s Eve. In Ballycotton in County Cork, Ireland, the spirit disguises took on a different aspect. Here, a young man would dress up as the Lair Bhan, a white mare and fertility symbol. The Lair Bhan led a procession of youths about the town. They would blow on horns to attract attention and demanded money from the assembled crowds in the name of a legendary wild boar called Muck Olla.

It also became common to guise as Christian saints. Many parish churches were too impoverished to own statues of the saints to take out in procession on All Saints Day. So people dressed up as the saints themselves and acted out their stories. These parades in their turn became plays enacted by mummers around October 31,with characters that combined Christian and pagan traditions: angels, demons, saints and the spirits of the dead. These costumes later became a part of the Souler’s repertoire as they went from house to house, taking the offerings once made to the gods in a strange mix of Christian and pagan disguises.

9. The Cultural Cauldron of America

By the nineteenth century, these diverse beliefs, pagan, Christian and hybrid were beginning to die out in Briain. However, around the same time, the seeds of them were being taken elsewhere and replanted, giving them a new lease of life in America.

Up until that point, however, Halloween had not made much of an impact on America. The first settlers, the Pilgrim Fathers, had no truck with the festival -or any other. As others from the British Isles with less rigid beliefs, settled the new land, they did bring with them their traditional beliefs. However, these traditions existed in small pockets, never really straying beyond the properties of the settlers.

However, in the 1840s, a large-scale influx of settlers changed things, as Irish immigrants fleeing the potato famine took up residence in the New World. Such were their numbers that their old traditions and beliefs- Halloween amongst them quickly spread and reignited interest in the ancient festival.

Twenty years later and Halloween as a tradition was quietly establishing itself. In 1866 that the Daily News of Kingston Ontario recorded the first use of a pumpkin lantern during festivities in the town. Some years later, in 1911, the same publication described the resurgence of souling and guising as part of the new tradition of trick or treating. The reinvention of Halloween had begun.

However, the authorities sanitized the festivities so that they were suitable for children. Newspapers encouraged parents to take anything ‘frightening’ out of their Halloween celebrations. Thus Halloween lost much of its original context and meaning. This modification, however, did not stop the ‘tricking’ aspect of these supposedly family-orientated festivities becoming out of hand. So in the 1920s, the authorities took Halloween firmly back into public control, introducing community Halloween celebrations to stamp out vandalism.

This public resurgence in its turn contributed to turning Halloween into the tremendous commercial event it is today. This commerciality has made it a profitable export to other countries, with the result over the last couple of decades of American Halloween traditions once again crossing the Atlantic and returning to their source.

While many people are happy to embrace the idea of trick or treat, telling spooky stories, pumpkin lanterns and fancy dress parties without really considering their original meaning, the return of this ancient winter festival has reawoken interest in its original practices. In many places, regions are rediscovering and reanimating their old Halloween practices in response to the American resurgence. Halloween seems to have come full circle. Perhaps its evolution is not over quite yet.