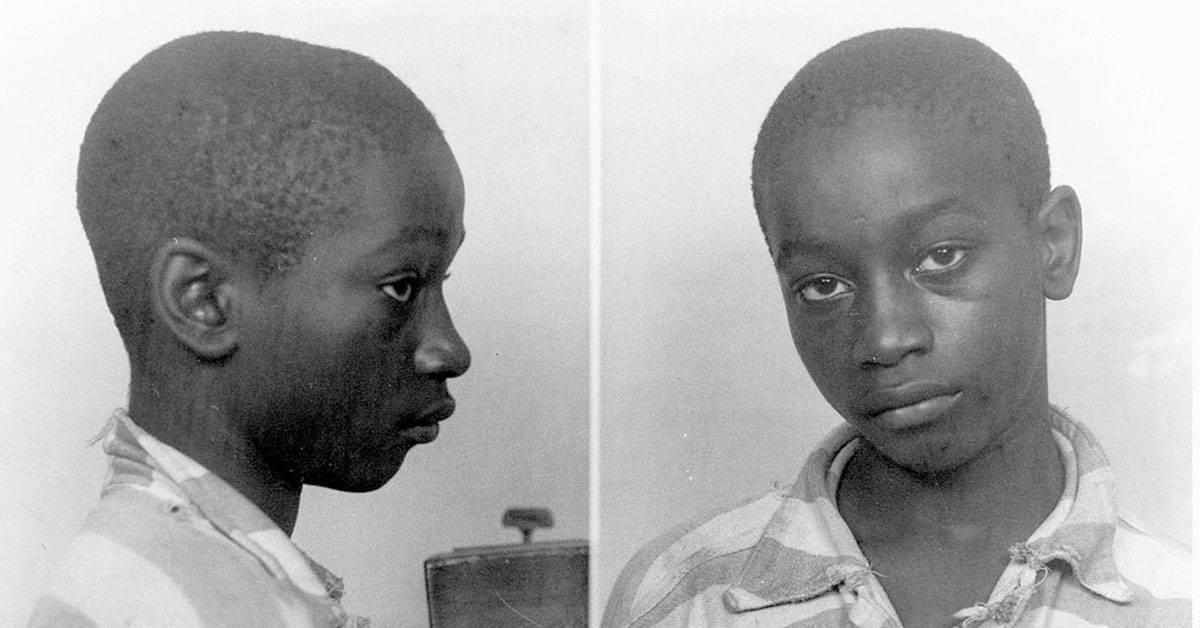 In 1944, the United States was a segregated nation and would be for another two decades. Especially in the South, it wasn’t unusual for small (and even larger) towns to be completely segregated between African-Americans and White people. Also during this time period, it wasn’t unusual because of the attitudes of society at the time for hate crimes to occur. This happened on both sides of the racial divide, and it happened very often.

On March 23, 1944, the bodies of Betty Binnicker (age 11) and Mary Emma Thames (age 8) were found in Alcolu, South Carolina. Their bodies were found on the ‘black’ side of town. They appeared to have been savagely beaten with some form of blunt metal instrument. Both were white girls.

The very next day, George Stinney, Jr. (age 14) was arrested for their murders. According to wire reports that day, the young man had confessed to the murders and had led investigators to a piece of iron that was supposedly the murder weapon.

Following his arrest, Stinney was confined to a jail 50 miles from Alcolu, where he was refused all visitors, including his parents. He would not see his parents until after his conviction. He was held in confinement for 81 days. He did not have access to a defense attorney until long after he supposedly confessed to the crime (remember he was 14 years old). Add in the fact, that the defense attorney that he was assigned was running for public office, and it isn’t surprising what happened at trial in terms of the young man’s defense.

The trial was a farce, even if Stinney was guilty (which we’ll discuss later). The trial took just one day beginning to end. The all-white jury convicted Stinney in 10 minutes. He was sentenced to death the same day.

During the trial, the defense called no witnesses at all, as Stinney’s defense attorney was worried about his upcoming election campaign. No African-Americans were allowed in the courtroom. The attorney didn’t even cross-examine the three witnesses that the prosecution called.

There is a lot that is wrong with the way the trial was conducted. Two different versions of Stinney’s so-called confession were presented to the jury by the prosecution. Even though the medical examiners were certain that neither girl had been raped, the prosecution presented the case as if they had been. There was no written confession, only testimony from police officers that Stinney had confessed. There was absolutely no physical evidence or eyewitnesses to tie George Stinney to the murders.

The entire trial took two and half hours. The jury then deliberated for 10 minutes. Unusually there is no transcript of the trial, and no appeals were allowed.

After the conviction, the family and the NAACP pleaded with the Governor of South Carolina for clemency. Governor Olin D. Johnston refused stating, “It may be interesting for you to know that Stinney killed the smaller girl to rape the larger one. Then he killed the larger girl and raped her dead body. Twenty minutes later he returned and attempted to rape her again, but her body was too cold. All of this he admitted himself.” The medical examiners (who were also witnesses at the trial) found no evidence to support sexual assault on either girl.

George Stinney Jr. was put to death by electric chair on June 16, 1944. He was the youngest person put to death in the United States during the 20th Century.

There is no evidence whatsoever that ties Stinney to the crime, but he was killed anyway. Sadly, this type of justice system in the south wasn’t uncommon. All-white juries for African-American defendants were very common. George Stinney just happened to be the youngest victim of such a system. George Stinney was just wrongfully executed in 1944.

Also Read: 8 Innocent People Who Were Found Guilty and Executed.