Today in History: Hitler Tours The City of Love (1940) 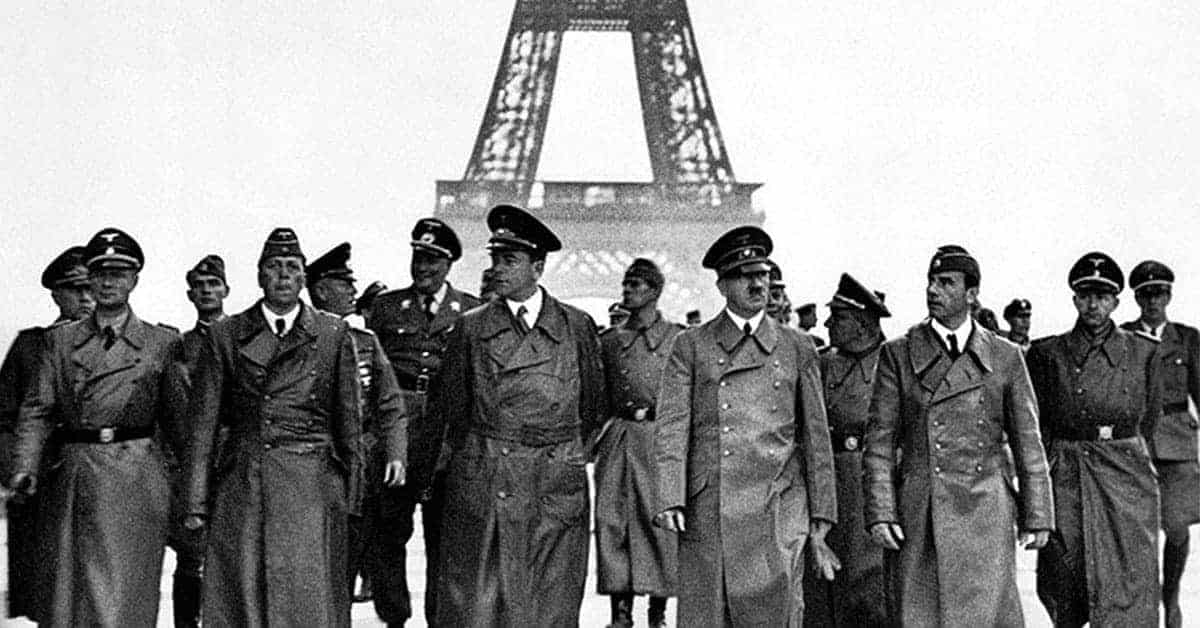 Today in History: Hitler Tours The City of Love (1940)

On June 23, 1940, Adolf Hitler took his first and only tour of Paris, France. During his visit, he surveyed several historical sites. In May of 1940, Germany invaded France and the low countries. Within six weeks it had conquered most of France, Belgium and Luxembourg. Hitler made a very quick tour of Paris, accompanied by Albert Speer, his favored architect. This was just one day after France signed an armistice with Germany, surrendering after Germany’s successful invasion.

Hitler’s tour included several notable landmarks including the Paris opera house, the Camps-Elysees, the Arc de Triomphe, and the Eiffel Tower. He also visited Napoleon’s tomb, where he stated upon leaving, “That was the greatest and finest moment of my life.”

Following his visit to Napoleon’s tomb, Hitler ordered Napoleon’s son’s body moved to Paris from Vienna, so that it would lay beside his father. He also ordered the destruction of two World War I memorials. The first was Charles Mangin, a very popular French World War I hero; the second was a statue of a British Nurse named Edith Cavell, who had been executed by Germany during World War I for helping Allied soldiers escape Germany occupied territory.

Over the years, there have been many comparisons between Adolf Hitler and Napoleon Bonaparte, mainly because there are some similarities that are purely coincidental. Both were foreigners to the countries they would eventually rule (Hitler was from Austria, Napoleon from Italy); both men planned invasions of Russia while simultaneously planning an invasion of Great Britain; both captured the same city on June 24 (Vilna in Russia); both of them had photographic memories, and both were fairly short (both under 5 foot 9).

Hitler became a bit obsessed with Paris after his visit there. He would often wax poetically about how he and his regime would make Berlin the “Paris of Germany.” He once said to Albert Speer, “Wasn’t Paris beautiful? But Berlin must be far more beautiful. When we are finished in Berlin, Paris will only be a shadow.”

In Albert Speer’s memoirs, he wrote about Hitler’s visit to Paris in 1940: “After a last look at Paris, we drove swiftly back to the airport. By nine o’clock in the morning, the sightseeing tour was over. “It was the dream of my life to be permitted to see Paris. I cannot say how happy I am to have that dream fulfilled today”. For a moment I felt something like pity for him: three hours in Paris, the one and only time he was to see it, made him happy when he stood at the height of his triumphs.”

It was also in Speer’s memoirs that we learn that Hitler initially planned on a victory parade in Paris later in 1940, but ruled it out because of fear of British air attacks. He also apparently said, “I am not in the mood for a victory parade. We aren’t at the end yet.”

This was at the beginning of World War II. The war would rage on for another 5 years and would see the Nazi regime spread throughout most of Europe before finally being defeated in 1945.

The Wall Street Journal – A Tour of War and Remembrance