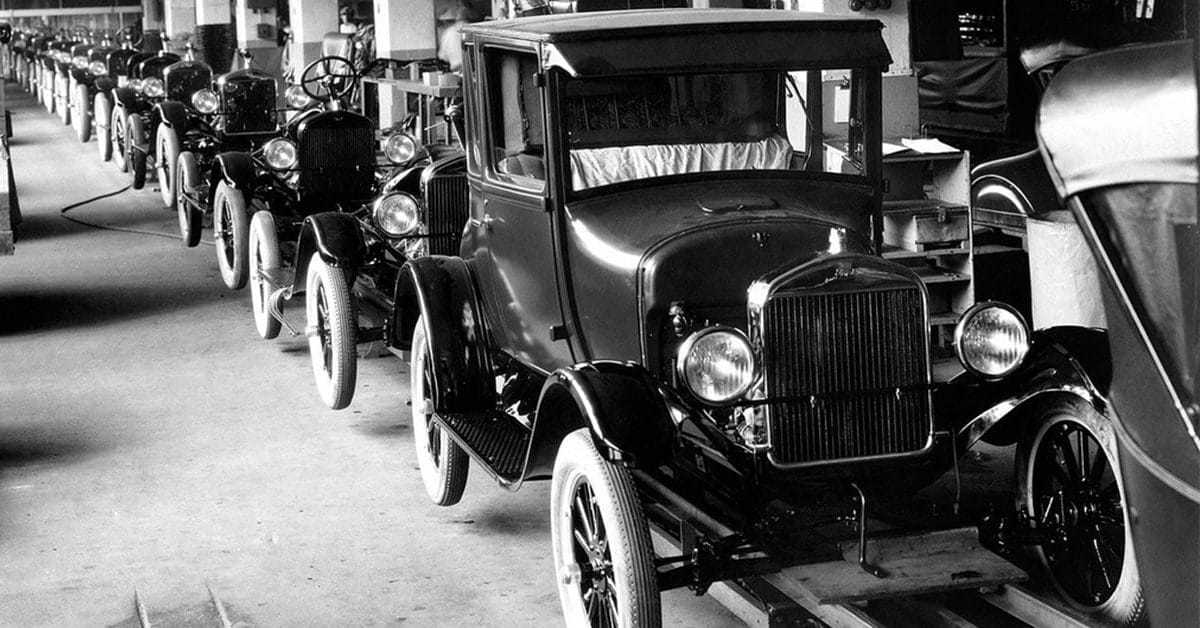 On June 16, 1903, the Ford Motor Company was founded. Henry Ford and twelve stockholders met in Detroit to sign the official articles of association. The company was officially incorporated the next day by the Michigan Secretary of State.

The Ford Motor Company was not Henry Ford’s first attempt at a car company. In fact, that happened in November of 1901 when he created the Henry Ford Company. He left in August of the next year, taking his name with him. That became the Cadillac Motor Company, which is now a division of General Motors (talk about historical irony).

Henry Ford created his first automobile in his backyard in 1896. At the time he was the chief engineer for the Edison Illuminating Company that was located in Detroit. He called it the Quadricycle.

The Ford Motor Company was founded with investments by 12 different investors, most notably John and Horace Dodge. The total initial investment by those 12 investors was $28,000. The first Ford motor vehicle was assembled just a month after the incorporation of Ford Motor Company.

There are many reasons why the Ford Motor Company is one of the most famous automotive brands ever to exist. First, there was Henry Ford’s use of the assembly line (which was created by Ransom Olds in 1901, despite the credit being given often to Henry Ford). This allowed for the Model T to become the first truly successful mass-produced automobile in 1908. Because of the way the Model T was produced, costs went down significantly, making it easier for people to buy, even those on a budget. It was during this time that cars became more useful for everyday utilization versus just a simple luxury.

Another reason was Ford’s ability to pay more to his workers. In January 1914, Henry Ford posted job positions at $5 a day for 8 hours’ worth of work. At the time, that was almost unheard of salary. In fact, it was more than double the average salary for a factory worker. A lot of historians give Ford credit for creating the Middle Class during this time period. Of course, Ford didn’t do this out of kindness. He was a businessman, after all. He did it to stabilize his workforce, reduce turnover, and draw in skilled labor.

There are a lot of controversies surrounding the Ford Motor Company during World War II which are interesting to study. On one hand, Henry Ford was a well-known anti-Semite. He, in fact, won an award from Nazi-Germany in 1938 due to his close collaboration with the Nazi regime.

By 1940, however, Henry Ford was 76, and was considered senile by his family. So despite his close relationship with Germany during that time period, the Ford Motor Company played a large role in the war effort after Pearl Harbor in December of 1941. This included being a major component of the “Arsenal of Democracy” which President Franklin D. Roosevelt had promised once the US joined the war effort. The company produced almost 400,000 tanks, 27,000 engines, and over 8000 B-24s, along with multitudes of other supplies needed for the war.

The Ford Motor Company is still one of the most successful automobile manufacturers in the world today. Its F-150 is the best-selling pickup truck ever to be produced, and it has had several other successes to its name over the last century. It is still controlled by the Ford Family, and is considered one of the largest and oldest family-run public companies in the world.