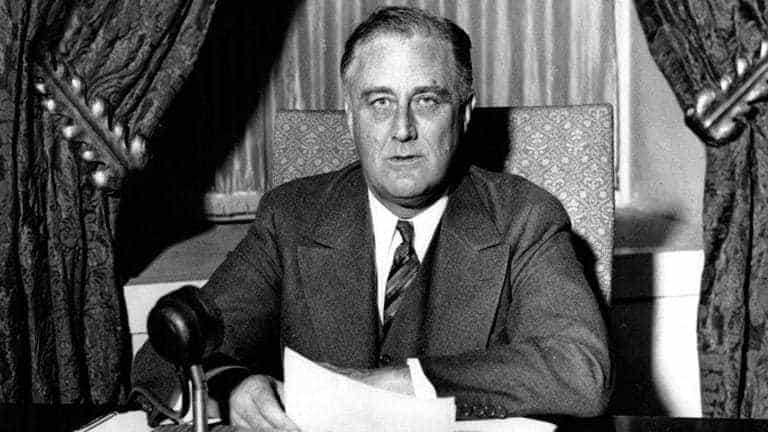 Today In History: An Assassin Shoots at Franklin D. Roosevelt (1933)

On February 15, 1933, an assassination attempt threatened the life of President Franklin D. Roosevelt who was in Miami, Florida giving an unplanned speech from the back of an open car. After the first shot was fired, he took cover; at the same time, the assassin continued firing as he was being pulled to the ground by those around him. Roosevelt was unharmed, but five people were shot as a result of the incident, one of the most badly hit was Anton Cermak, the mayor of Chicago, who had been standing directly next to Roosevelt when the first shot was fired.

Roosevelt held Cermak’s wounded body while they rushed him to a hospital for medical assistance. Cermak did not make it – before dying, he is reported to have said to Roosevelt, “I am glad it was me instead of you.” That later became the epitaph on Cermak’s gravestone – he died a few weeks later, just two days after Roosevelt was sworn into office. With Cermak dead, the assassin, Giuseppe Zangara, was charged with murder. A lot of controversy surrounds Zangara’s motives for his actions. As an immigrant without much schooling who was only able to land menial jobs at low pay, he may have been frustrated. But there are other ideas about his role and why he was there that day.

Years after the event, scholars began researching the scenario more closely, and with added information from Secret Service records, they concluded Roosevelt was not the intended target that day. The early 1930s was a heated time in Chicago; gang violence was prevalent, and the environment was dangerous, especially for those getting in the way of business.

One could say Anton Cermak was getting in the way: three months before that day in Miami, as mayor of Chicago, he signed off on a plan to assassinate Frank Nitti, the head of the largest mafia syndicate in the city at that time. There are other elements supporting the theory the bullet was meant for Cermak and not Roosevelt. Zangara was an Italian-born immigrant and a marksman during the First World War. If the mafia were going to hire a hit-man, it is not improbable they would have used Zangara, who gave no testimony to support this idea. He always said Roosevelt was his target. Zangara was executed on March 20, 1933, for the murder of Cermak.