Charles Curtis: The First and Only Native American Vice President of USA 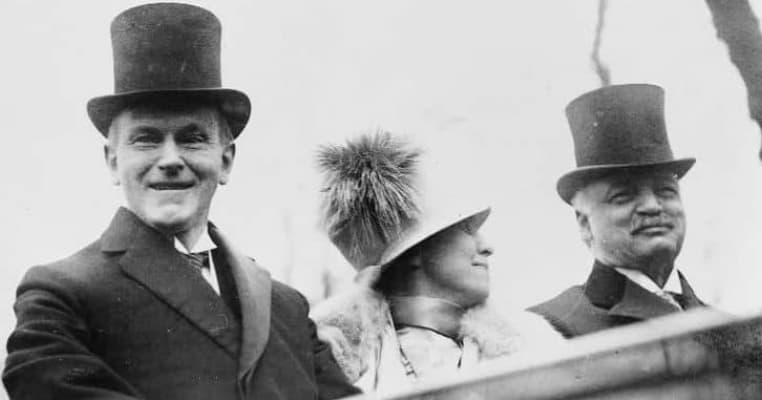 Charles Curtis was a remarkable figure in US politics. A member of the Kaw nation through his mother, Curtis was the first Native American and first person of documented non-European heritage to serve as the vice president of the United States. He was also the last person born in a territory, instead of a state, to serve in the office. Curtis held deep connections to his Native ancestry. His first words were in French and Kansa, the Siouan language of the Oklahoma Kaw nation, as taught to him by his mother. He grew up on tribal land that would become a reservation and was greatly influenced by his mother’s parents, who had Kaw, Osage, and Potawatomi ancestry.

After a turbulent childhood in which he survived raids on his land by the rival Cheyenne tribe and his parents’ divorce, Curtis flourished in school and sought higher education with the support of his grandmothers. Given the era and his relative isolation in Kansas, Curtis did not attend law school but rather “read law,” which typically involved an extended apprenticeship, at an established firm in Kansas and was admitted to the Kansas bar in 1881. Before embarking on his political career, Curtis served as a prosecutor for Shawnee County in Kansas.

At only 32 years of age, Curtis started on a lifelong political career that would see him become an enormously popular and charismatic senator before ultimately attaining the second-highest office in the United States. In 1892, Curtis won his first election to the US house of representatives as a Republican representing the district covering Topeka, Kansas. He was re-elected six more times serving the same region. Curtis was widely known as a compassionate leader and was deeply invested in his constituents. He was known to travel his district extensively and make personal connections with his voters, many of whom he treated as friends.

While in the house of representatives, Curtis introduced the Curtis Act of 1898 which expanded the Dawes Act to the “Five Civilized Tribes” of Indian Territory. This act stripped the tribal governments of all of their power and seized their land for allotment by the US government. Curtis’ own experience of leaving his tribal land for education led him to believe that assimilation among whites was the best path to success for Native Americans. A similar act in 1902 stripped his own people, the Kaw, of their tribal land and relocated them from Kansas to Oklahoma.

In 1907, Curtis resigned from the house of representatives due to being elected by the Kansas legislature to a vacant Kansas Senate seat. The 17th amendment, requiring the popular election of US senators, was not ratified until 1913. Democrats took the Kansas house in 1912, which led to Curtis not being re-elected. However, with the ratification of the 17th amendment, a public election was held in 1914 in which Curtis retook his seat through the popular vote. While in the Senate, Curtis served as both the Republican Whip and Majority Leader.

Charles Curtis did not shy away from his Native heritage during his political career. Writers of the time noted that he often referenced his rise from “Kaw tepee to Capitol.” He decorated the vice president’s office with Native memorabilia and sometimes posed for pictures wearing native headdresses. During public addresses, Curtis enjoyed telling the audience a favorite quip that he was “one eight Kaw and one hundred percent Republican.” He spoke openly to the press of his childhood spent on reservation lands and working as a jockey where he earned the nickname “The Indian Boy.”

Curtis’ Native roots ran deep. He was the great-great-grandson, on his mother’s side, of the Kaw chieftain White Plume, who was famous for offering assistance to Lewis and Clark on their expedition. He spoke Kaw fluently and spent much of his childhood playing with Native children on the tribe’s land. He even survived raiding parties of nomadic Cheyenne people on his land, once famously making a trip on foot to Topeka to warn the governor of the attacks. It was this attack that led his white grandparents to decide that Curtis needed to be raised in a more “civilized” atmosphere, at which point they moved him to Topeka rather than allowing him to return to his mother’s people.

While living with his paternal grandparents, Curtis began work as a jockey. He had learned to ride ponies bareback on the reservation and was an able jockey despite being a rather stocky young man. However, his grandparents had higher hopes for him than jockeying and encouraged him to attend school. After his paternal grandfather’s death, in 1873, Curtis briefly left his paternal grandmother to seek out his mother’s parents, who were traveling from the Kaw nation in Kansas to the Indian territory in Oklahoma. His maternal grandmother agreed with his paternal one, and also encouraged the young Curtis to go back to Topeka and seek an education. Curtis would later recount, “No man or boy ever received better advice, it was the turning point in my life.”

At this point, Curtis’ life becomes a classic American story of hard work and determination. After retiring from jockeying at his grandmother’s demand, Curtis completed high school. He then put himself through law training by working as a janitor at a law firm and driving a hack cart at night. When lacking for passenger fares, Curtis would reportedly sit parked under a street lamp reading his law books. He was admitted to the bar at only 21. However, despite appearing as rags to riches story, Curtis actually owned a fair amount of land in the horrifyingly named “Half-breed plots” set aside for Natives who married into white families.

After his admittance to the bar, Curtis established a law practice and engaged in criminal law practice. He also began dabbling in real estate, selling lots and building houses. He also showed an interest in politics early on, participating as a torchbearer in a parade for presidential candidate James Garfield. In 1884, Curtis won his first election to a public office, at only 24 years of age. The popular and well-liked “Indian Jockey,” as Kansans called him, was elected as the Shawnee County attorney, which became a stepping stone for a decades-long and illustrious political career.

Curtis Left A Legacy of Firsts

Despite bringing a legacy of “firsts” to the office of the vice president, his tenure was neither happy nor successful. Curtis ran against the eventual nominee, Herbert Hoover, in an acrimonious primary that featured Curtis leveling some hefty insults against Hoover. He was often called “Sir Herbert” by rival Republicans, in an attempt to denigrate the brief time he spent living in England. Curtis cut a far more populist figure, with his friendly demeanor and rural ties than the highly educated and aristocratic-seeming Hoover.

While they traded many barbs during the primary, once Hoover was selected it became immediately apparent that Republicans needed a rural and “common man” type of figure to round out Hoover’s ticket. Despite the lack of any love lost between the two men, Hoover was amicable to Curtis being added to his card, and Curtis readily agreed despite seeing the vice presidency as a somewhat useless position. Though they won in a landslide, Hoover didn’t seem to credit any of their success to his vice president and mostly locked him out of the affairs of running the country.

The most noteworthy incidents of Curtis’ tenure as vice president were all rather negative and embarrassing. First was an issue of protocol, with Curtis’ half-sister Dolly demanding to be seated, as Curtis’ hostess, ahead of the haughty Alice Roosevelt Longworth, wife of the speaker of the house. Negative press followed him after this incident, and he became associated with his second embarrassment: a comparison to the useless vice president Throttlebottom from the Gershwin musical Of Thee I Sing.

The last, and most damaging, of Curtis’ missteps, came when he was asked about the Great Depression afflicting the United States’ economy. Curtis replied with the infamous ill-fated comment “good times are just around the corner” which would come to haunt President Hoover and help cost him (and Curtis) re-election. The disastrous state of the economy, which the public primarily laid at Hoover’s feet, ultimately handed the election in a landslide to Democrat Franklin Delano Roosevelt. After serving his one term as vice president, Curtis retired from politics and spent the four remaining years of his life practicing law in Washington D.C. He died in 1936 at the age of 76.