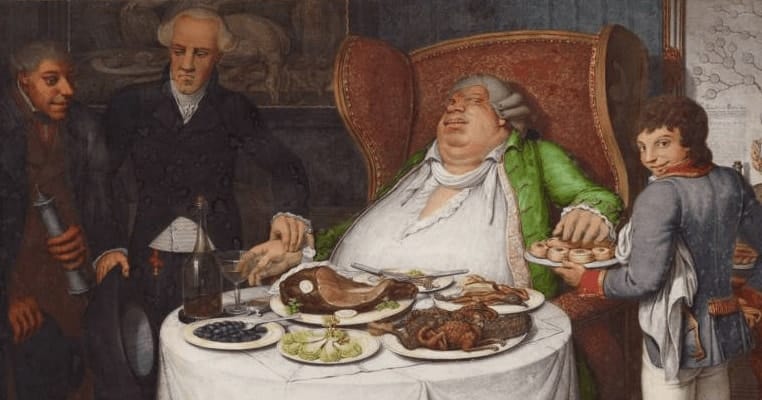 Tarrare’s Skills Made Him Into a Spy

Tarrare’s strange ability to eat non-stop caught the attention of two military doctors named Dr. Courville and Baron Percy. They were curious as to know how it was even possible for one man to eat so much without gaining weight. He was diagnosed with a condition known as “polyphagia”. This is not a disease within itself. It is usually coupled with diabetes or hyperthyroidism, where the body does not process food properly. Usually, people with polyphagia also look very skinny and sickly, because the food is passing through them without absorbing the nutrients. This inability to feel satisfied pushed him to keep eating, to the point where he was willing to scarf down unconventional foods. A lifetime of these habits are what lead to his physical deformities.

In the medical journals, the doctors described Tarrare as being a lot like an animal. He was wild and ferocious, and really only thought about eating. However, despite his ravenous hunger, he was completely sane. People were able to communicate with him perfectly well, and he expressed that he wished he did not feel this way. He was just a really hungry guy. Years after his death, there were other examples of people with the same condition, like a man named Nicholas Wood, the Great Eater of Kent, and another named Jacques de Falaise. Since Tarrare’s case study was in medical journals at the time, doctors were able to go back and compare.

The doctors performed some experiments to see just how far Tarrare would go to satiate his appetite. They handed Tarrare an eel that was still alive. He bit into the head and slurped it up as if it was eating spaghetti. He didn’t seem to care that this was a living creature with hundreds of sharp bones. For a normal person, the sharp eel bones might puncture their internal organs, but Tarrare’s body could somehow handle it. He also ate a cat while it was still alive. He grabbed the unsuspecting feline, ripped its body apart, and sucked out the blood before eating the meat off of the bone. Unlike the eel, he made sure to remove the fur and bones from the cat.

Since these were military doctors who were examining Tarrare, it only made sense that they wanted to see if he could be of any use to the French army. General Alexandre de Beauharnais wanted to give him a secret message to carry into Prussia. He asked Tarrare to eat a small wooden box that had a piece of paper inside of it. Sure enough, the box was still intact a couple of days later. So, the general sent him on a mission to pose as a Prussian peasant, and bring a message to a captured French colonel who was behind enemy lines. However, aside from his stomach, he did not qualify as a spy at all, especially since he could not speak a word of German.

The Prussians captured Tarrare and began to torture him to extract his secrets. Again – since he was not a trained spy – he gave up everything he knew very quickly. The Prussians waited for a couple of days, until he finally went to the bathroom and passed the wooden box with the secret note inside. Once they opened the box, the message simply asked if Tarrare was successful on his mission. Obviously, the answer was “no”, and he completely failed General Beauharnais’ test run. He was ordered to be executed, but Tarrare was sobbing, begging to be set free. After all, he never even asked to be involved with this plot. So, the Prussians let him go.