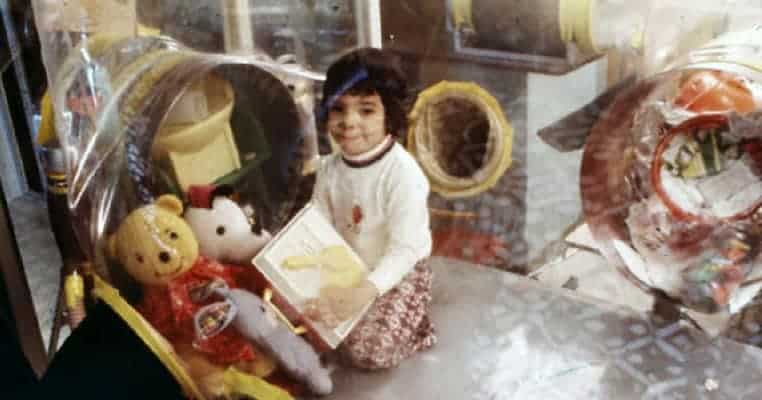 You may have seen the 1976 movie called The Boy In The Plastic Bubble starring John Travolta, or the 2001 film Bubble Boy starring Jake Gyllenhaal. But you may not know that both of these movies are based on the true story of David Vetter. He was born with a disease where it was far too easy for him to catch an infection from the outside world.

The Birth of The Bubble Boy

In 1971, David Vetter was born in Houston, Texas. His mother, Carol Ann Vetter, had lost her first child to a condition called Severe Combined Immunodeficiency (SCID). This is a genetic condition where the body’s stem cells fail to build up an immune system to fight off infection. When David was born, she was prepared to tell the doctors how to save his life, because they could see that after only being exposed to the air for a few seconds, he was already showing symptoms of getting sick. He was quickly moved to a sterile bubble. Most babies born with SCID die right away, so it was a miracle that David even survived long enough to get into a safe space.

Doctors hoped that maybe he would outgrow the disease by age two, when his body was able to have an immune system strong enough to survive in the outside world. He was raised in the Texas Children’s Hospital, living inside of an enclosed area made of plastic. This was very literally a giant bubble.

When he started to appear on TV, people from NASA created an air-tight space suit for him, so that he could walk in the outside world for the first time when he was 6 years old. His mother was finally able to give her son a hug for the first time, and he could play catch with his sister. However, he was still confined to walking around the hospital grounds, because he needed to be attached to machines that kept the air in his spacesuit sterile.

When he was old enough to go to school, a private tutor would visit David so that he could learn to read, write, and do math just like every other kid his age. Since film crews from the news would come in to interview him, and he was able to watch the movie about his story through the plastic, he knew that he was very special Sometimes, he would throw little tantrums, saying that he shouldn’t have to clean up after himself, because he was famous. Aside from that, he was a very well-behaved, friendly, and intelligent boy. His mother thought that someday, he would finally leave the bubble, and go on to become a doctor or a medical researcher. They were his heroes, after all.

Even though he lived inside of the bubble, everyone did their best to explain the outside world to him. He got to watch TV shows, movies, and read books. As he grew older, it became more and more clear as to what he was actually missing.

The Controversy Leads To A Risk

When he was 8 years old, doctors told him that it may take another 10 years to come up with the cure, meaning that he would have to live in the bubble until adulthood. This idea of a grown man in a bubble was part of the inspiration for the movies. But the more people learned about David Vetter’s true life, the more people started to voice their opinions on the issue. There was even a huge discussion about his situation by the University of Virginia as doctors and professors speculated over the ethics of raising a child in a bubble.

Since it had been years since the doctors even attempted to take David out of his bubble, many people wrote to his mother, Carol Ann, saying that she was cruel for keeping him a “prisoner” inside of the plastic. Many people accused her of being overprotective, controlling, and a bad mom. She got a lot of criticism from both the professional world and just the random person who decided to send a hateful letter.

At age 11, David was thinking a lot more about the outside world and asked to see the stars. His parents had to make a lot of arrangements for him to do this, and he was able to stare at the night sky for just 20 minutes on his birthday. When he was 12, he was beginning to enter his teenage years, and he wasn’t afraid to voice his desire to get out of the bubble and be a part of the rest of the world.

David’s desire to leave the bubble, combined with the public pressure was enough for his parents to take a risk. The cure was not complete, but there were experimental procedures that doctors hoped would work. A man named Dr. William Shearer suggested that they could take bone marrow from David’s sister, Katherine, who was born healthy and inject him with it. This had worked in other cases of SCID, so they hoped that this would be enough to cure him, but there was no guarantee that it would work.

We now know today that even if two people are siblings, that does not necessarily make them a perfect bone marrow donor. In the successful cases that worked for other SCID patients, they may have just gotten lucky. Unfortunately for David, he and his sister were not a perfect match, and it did not work. His parents had hoped that if the procedure failed, it would just mean that he could continue living on in the bubble.

During the short window of time that he was out of the bubble receiving the surgery, he caught the Epstein-Barr virus. Just two weeks after the surgery, he contracted a cancer called lymphoma, and it spread through his body so quickly. Without any immune system at all, the cancer destroyed his body. Even though the public gave David’s parents a hard time, they were right all along. He should have never left his bubble.

Media Coverage Leads to a Cure

Because of all of the media coverage, doctors from all over the world were trying to figure out the cure to SCID. This was such a rare disease, no one really bothered to find the cure, because it affected such a small population. Only one in every 50,000 kids is born with this genetic disorder, but many doctors believe that it is actually more common than we think, because it is often misdiagnosed. Because of David, the research finally got the funding it needed.

Even though the bone marrow transplant failed, the doctors were on the right track. It turns out that the answer to the issue is to take the baby’s own bone marrow and stem cells from the umbilical cord, so that there was a perfect match immediately. This works in 95% of cases. That last 5% is usually because the parents had no idea that SCID ran in their family, and the baby did not show any symptoms until they were a few months old. Once a child with SCID has caught their very first infection, it is already too late to help them, and there is nothing that can be done.

Today, identifying SCID is so advanced, babies can be diagnosed with it when they are still in the womb. Doctors can inject a bone marrow transplant while the mother is still pregnant so that children can be born with a healthy immune system from day one. Not every state requires a SCID screening, but parents all over the United States are pushing to make it mandatory, so that no child ever has to be born with this disorder again.

Since we almost never hear about anyone with SCID anymore, the idea of a “boy in a bubble” has become almost a joke. It is often misunderstood as a result of helicopter parenting. The Bubble Boy movie in 2001 was also a comedy based around an overprotective mother, rather than a child who was truly too sick to function in the outside world. It even appeared as a gag in Seinfeld and The Simpsons. David’s parents, and the parents of children with SCID were disgusted by the fact that the genetic condition that lead to their son’s death has been turned into a comedy.

Even 40 years after his death, the ‘Bubble Boy’ case is making waves in the medical community. David’s mother, Carol Ann Vetter told the New York Times that she believes even though David could not grow up to become a doctor, he is still helping mankind. “This story had a beginning, a middle, but there is really no end. And that is because of David’s Legacy.”