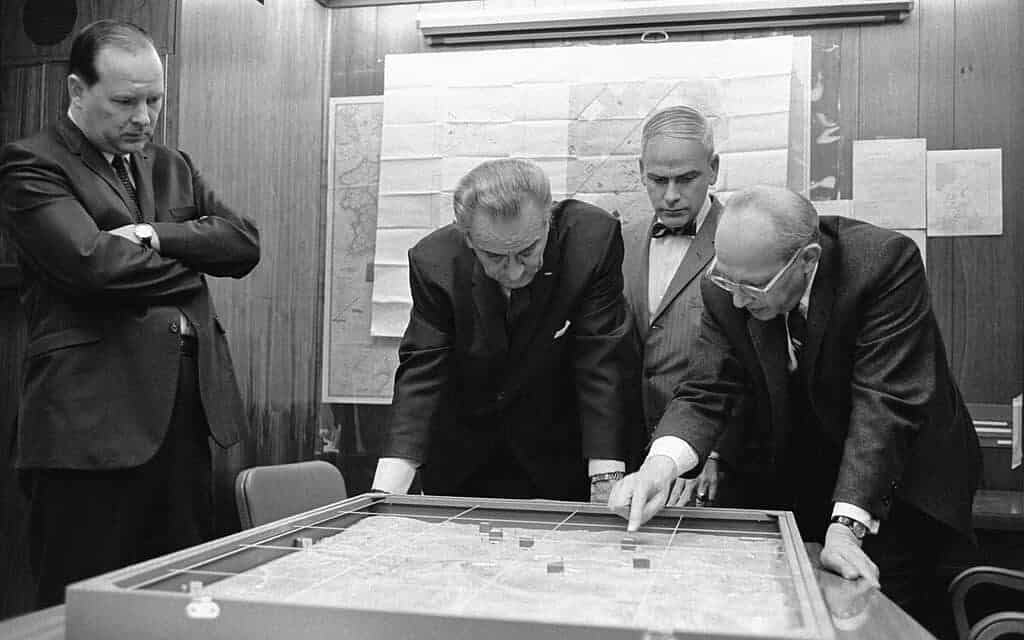 19. Nixon’s staff escalated the public knowledge of the Pentagon Papers

Although Nixon was disinclined to pursue any action against The New York Times when publication began (before the Washington Post published them) he spoke with his then Attorney General, John Mitchell, on June 14, 1971, the day of publication of the second installment. Nixon was still hesitant to do anything to impede publication and stated that he wanted to pursue finding and arresting the leaker, but under prodding from Mitchell agreed to send a message to the Times. Mitchell left the President with the impression that the message would be a telegram requesting that the paper cease publishing information which was still classified.

Instead, Mitchell sent the Times a message which demanded a cessation of publication and return of the classified papers and all copies, under the threat of prosecution of the newspaper and the individuals involved with publication under the 1917 Espionage Act. The paper said it would publish until a court decision said they could not. Meanwhile Kissinger joined the fray, concerned what the Pentagon Papers revealed concerning American China policy for decades would erode his negotiations with the Chinese at the time. Kissinger also knew that Ellsberg, who had once worked for him, was well aware of other damaging reports which would discredit the United States, and wanted him silenced immediately.

20. Under Nixon, deception of the American people over Vietnam continued

Although the Pentagon Papers did not cover activities of the Nixon Administration regarding the Vietnam War, early in his presidency he authorized further expansion of the war, to be conducted covertly, while the American public was informed otherwise. Nixon authorized the execution of Operation Menu in early 1969. The operation was the extended carpet bombing of Cambodia using, for the first time, B-52 heavy bombers. The bombing was ordered in March and by May 1969, The New York Times had the story, and in an article published on May 9 citing unnamed sources revealed the operation to the American people.

Some of the same people in the Department of Defense responsible for the Pentagon Papers were working on the Cambodian operation, and Nixon suspected one of them, Morton Halperin, an aide to Henry Kissinger, of being the source of the story. Halperin’s phones were tapped, illegally, at Nixon’s order to the FBI. It was the first illegal telephone surveillance ordered by the Nixon Administration on the grounds of “national security” and the taps remained in place for nearly two years. The bombing raids in Cambodia drove the North Vietnamese forces they were targeting westward over the next four years, and the bombers flew deeper into Cambodia to follow them.

21. The New York Times was awarded a Pulitzer Prize for Public Service in 1972

Thanks to the secret taping system Richard Nixon installed in the Oval Office it is possible today to listen to a recording of the President summing up his view of the Pentagon Papers in a conversation with aides on May 11, 1973. “The son of a bitching thief is made a national hero and is going to get off on a mistrial, and the New York Times gets a Pulitzer Prize for stealing documents”, the President grumbled, followed by the comment, “What in the name of God have we come to?”. At the time, the Watergate scandal was digging deeply into his administration.

By then the American people and press were more absorbed in the Watergate investigations and the legal battles over Ellsberg’s actions, rather than the content of the Pentagon Papers, which had revealed the truth of America’s early involvement in the war. The war itself remained controversial, usually over the lines of how fast the United States could get out. The actions of Truman, Eisenhower, and Kennedy, and to some extent even Johnson, were no longer considered germane to the central issue, which was withdrawal.

22. How much damage did the Pentagon Papers do to the United States?

In the long run, the Pentagon Papers did little to change the political situation in the United States as it regarded the Vietnam War. Hawks remained hawks and demanded the heads of Daniel Ellsberg and the reporters and editors who published the documents. Peace advocates continued to condemn America’s “illegal war” and demand an immediate ending of it. The government continued to expand the war, into Cambodia and Laos, while informing the American people that gradual American withdrawal and “peace with honor” were coming. The long-suffering Vietnamese people continued to suffer.

The entity which was most damaged by the release of the Pentagon Papers and the legal squabbles which surrounded them was the Nixon Administration, and as in other areas of his troubled and troubling presidency, most of the wounds suffered were self-inflicted. Had Nixon allowed publication to go forward unimpeded the papers would have exposed the duplicity of previous president’s while allowing him to compare his efforts for peace and Vietnamization of the war effort favorably in comparison to his predecessors. Instead, he bore the bulk of the damage for America’s long involvement in Vietnam.

23. The Pentagon Papers list the chronology of the United States escalating the war

Beginning on November 26, 1963 – the day after the funeral of John F. Kennedy – and continuing through 1964, there were a series of steps completed by the United States with the expressed intention of luring the North Vietnamese into escalating the war, allowing an appropriate response by the United States military. The steps were taken with the upcoming 1964 presidential election in the United States under constant consideration. The insurgency by the Viet Cong was exaggerated, the weakness of the government of South Vietnam exploited, and US advisors stepped up their activity in prodding the North Vietnamese.

There was also an expansion of air reconnaissance over Vietnam, as well as Laos and Cambodia, conducted by US airplanes, intended to provoke a response. The same applied to Naval patrols along Vietnam’s coast line, which eventually led to the Gulf of Tonkin incident. The entire chronology, and the supporting Department of Defense analysis and summary, indicts the Johnson Administration for deliberate expansion of the war, timed to take place after the 1964 election, and rebuts President Kennedy’s autumn 1963 statement to Walter Cronkite, “…after all it’s their war”.

24. The US Joint Chiefs of Staff recommended military action in October, 1964

In October 1964, just weeks before the election, the United States Joint Chiefs of Staff recommended to the National Security Council and the President, “strong military actions are now required in order to prevent the collapse of the US position in Southeast Asia”. It was in the fall of 1964 that President Johnson allowed American advisors, in company with South Vietnamese troops, to cross into Laos on the ground in order to destroy supplies meant for the Viet Cong, or the means of transporting them. By the end of 1964, often these raids included only one Vietnamese soldier, the rest being CIA and US military personnel.

The same timeframe saw an expansion of the US operations known as FARMGATE, essentially a reconnaissance, supply, and bombing operation using unmarked and obsolescent American airplanes (such as WW2 vintage B-26 bombers) flown by Vietnamese crews accompanied by American advisors. By the end of 1964, most FARMGATE flights were conducted by all American crews, sometimes accompanied by mercenaries from other western countries, with one Vietnamese crew member. In describing the thinking at one conference in which these and other American actions were approved, the Pentagon Papers read, “Our point of departure is and must be that we cannot accept overrunning of Southeast Asia by Hanoi and Peiping”. [Beijing]

25. The Pentagon Papers contain the thoughts and discussions among the policy makers of American history in the mid-20th century

Throughout the entire collection of documents which comprise the Pentagon Papers the thoughts and suggestions of America’s post- World War II political and military experts and their lower level staffs are listed in detail. Presidents do not appear often, and when they do it is as an expression of approval or disapproval of the recommended action, questions regarding a report, or intention regarding strategy. The papers are littered with the names of second-half 20th century American history. Dean Acheson, Henry Cabot Lodge, George Marshall, Dean Rusk, Robert McNamara, Maxwell Taylor and many others. They offer a straight-forward description of how American involvement developed into a trap for itself.

The Pentagon Papers have long been available in print in numerous volumes, some abridged, some with commentary. They offer a comprehensive and highly detailed presentation, step-by-step, explaining how the United States descended into the quagmire of Vietnam. Much of the presentation is not pretty to American eyes when the level of deceit by the government is considered. Late in the period of the war they cover, the military was also deceiving the government it served. They were made available online on the National Archives website, with each volume a separate PDF file, in 2011. They were also released to Presidential Libraries allowing all Americans to read them for themselves.

“Draft Memorandum From Secretary of Defense McNamara to President Johnson”. Robert McNamara. Office of the Historian, US Department of State. November 3, 1965

“Memorandum From the President’s Special Assistant for National Security Affairs to the President”. McGeorge Bundy, Office of the Historian, US Department of State. September 8, 1964. Online

“Secrets: A Memoir of Vietnam and the Pentagon Papers”. Daniel Ellsberg, 2002

“Nixonland: The Rise of a President and the Fracturing of America”. Rick Perlstein. 2008

“Sideshow: Nixon, Kissinger, and the Destruction of Cambodia”. William Shawcross. 1979