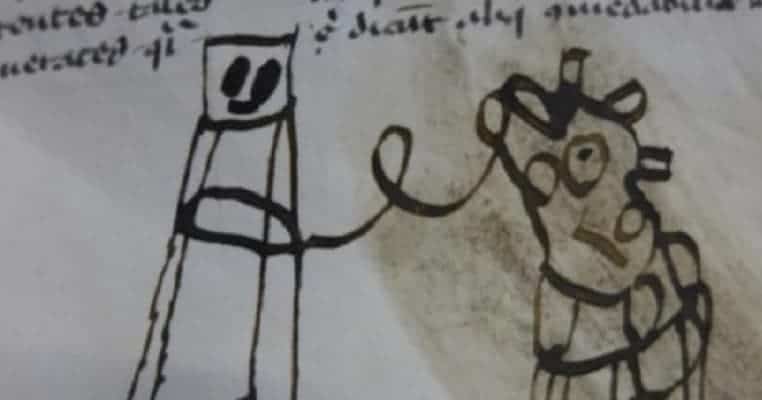 Open a beloved old book and the memories unfold. The moment that sweetly acrid smell tickles our noses may be enough to reflect on the time when we first opened that lovely book. And if we’re really lucky, we might glimpse parts of our forgotten past or open a window into someone else’s.

Sometimes, especially if we’re in a museum, or a library as magnificent as Oxford University’s Bodleian Library, we might find drawings from kids bored to tears during a school day in the Middle Ages or imprints of someone’s spectacles. Or even 14th Century pawprints from a wayward cat walking across a Bible in Croatia. If we are extremely lucky, we might discover the beautiful doodles left behind on the back pages of a book.

Indeed, these ancient images are a link to a time we left behind long ago.

The Cat That Trampled This Medieval Manuscript In 14th Century Croatia

Medieval books were not immune to damage while they were being written. Books were costly to produce at this time, so damage would have to be quite extensive for them to be discarded. It was considered perfectly fine if the books had an individual flair all their own because they were, after all, unique products of the human mind.

But sometimes they were also products of a curious cat.

Such appears to be the case in the manuscript mentioned above. When doctoral student Emir O Filipović stumbled across the manuscript at the University of Sarajevo in Dubrovnik, Croatia, he found the mischievous cat’s paw prints that were apparently left behind before the ink on the manuscript had even dried. Filipović surmised that the errant feline interrupted the scribe by sticking its paws in the inkwell before walking across the book. Undoubtedly the 14th Century author was annoyed but likely philosophical. Scribes during this time simply crossed out errors and moved on.

But it doesn’t seem likely that this kitty pounced while the scribe was still writing because the position of the paw prints show that the book was already bound and completed. There’s the chance the writer may have left the book open while he worked on another copy nearby. Or perhaps, as Kate Wiles, an expert in medieval linguistics has suggested, the scribe took a lunch break and left the manuscript out.

The chicken who crossed the manuscript instead of the road

The trend of wayward animals trampling books continued even after the invention of the printing press in the 15th Century. The Bible in the photo above has been with us since the 16th Century. As you can see, a fair-sized bird, most likely a chicken, traipsed across the open pages, leaving muddy footprints behind.

But sometimes cats and chickens weren’t the only ones bodging the books.

A Dutch writer in the 16th century adopted a hard-nosed attitude regarding kids and books, pretty much suggesting the two should never come into contact with each other — for the safety of the book. In the ancient text, apparently written in 1527 and titled “How One Shall Preserve All Books To Last Eternally,” the author listed eight rules for preserving a book. Some of the rules included things like not writing in the margins, not placing them too close to the fireplace, and not allowing little dirty fingers to peruse the books.

However, the author wrote the eighth rule after the manuscript was completed, and broke his own rule to do so.

And in that very last rule, he writes:

“Do not give your books to children.”

In the margin, of all places. Because allowing kids to read a beloved book will have deleterious consequences, he contends.

“Eighth, one should not let children learn from any book that one wants to preserve,” he wrote. “Because whatever comes into their hands, as we see, it either stays there or is ruined.”

But whenever kids did get their hands on a book, the doodles they left behind were fascinating.

In the photo above, we have what looks like a rather square-headed person and perhaps a cow or a goat. Obviously, this looks like a child’s drawing, especially, as noted by author Deborah Ellen Thorpe, writing for Cogent Arts and Humanities, since the human figure is reduced to its most important features — that rather squarish head and two long legs. Doodles similar to the one above abound throughout medieval literature, and they are often referred to as “tadpole figures.” Young children still have immature motor skills, and this is where the rather fanciful long arms and legs come in. Developmental psychologist Rosalind Arden has said in personal correspondence that the tadpole style of this drawing is typical for children who are about four years old. It’s not unusual for tadpole drawings to feature very long legs. It’s thanks to those long legs that the figure in the drawing above is almost twice as long as the creature. That changes over time as children improvise their ability to capture the correct height-width ratio of human figures, Thorpe writes.

But there’s another interesting facet to this drawing, one that also owes itself to a child’s habit of keeping things curiously compact. The figure’s eyes are filled in, further reducing the features to little more than a head and legs.

But Doodles and Pawprints weren’t the only things left behind

Evidence suggests that the first eyeglasses were invented in the 13th Century, and people have been forgetting them in strange places ever since. Including in the middle of books, perhaps to be used to mark one’s place, only to wind up being lost to history. Illustrations in some medieval books show people wearing glasses, and some books even contain physical evidence of the use of spectacles.

The eyeglasses above were nestled between two flyleaves of a book that was printed in Venice Italy, most likely during the 1500s. Micah Erwin, writing for Ransom Center Magazine, notes that spectacles were probably invented during the latter part of the 13th Century by a friar living near Pisa, Italy.

These earliest eyeglasses usually consisted of two convex glass discs enclosed in rims made of bone or metal that connected just over the nose thanks to a centrally located rivet. These could either clamp onto the nose or the wearer could just hold them up to their eyes. In later versions, glasses had leather or wire rims. We know this thanks to surviving specimens, and also thanks to paintings. An artist working on a 1352 fresco that adorns a Dominican monastery in Treviso, Italy, offers us the earliest depiction of spectacles. And there have been numerous depictions of a bespectacled St. Jerome, the famous scholar-saint who translated the Latin Bible.

By the end of the 15th Century, eyeglasses were commonplace throughout much of Europe, most scholars believe. Countries like England imported thousands of pairs. Florence became the hotspot for manufacturing spectacles, producing some that were of the highest quality.

But actual evidence of these early spectacles is quite rare, despite the fact that they were being mass-produced. Archaeologists have found only one pair of rivet spectacles in this ancient city. Even in the U.S., where libraries contain thousands of medieval manuscripts and early printed books, evidence of eyeglasses is still very rare, Erwin notes. One pair was found at the Folger Shakespeare Library inside Folger Copy 46 of the First Folio (the first published collection of Shakespeare’s plays, which was printed in 1623.) And one 16th Century volume at the Catholic University of America in Washington, D.C. contains the carved-out outline of a pair of spectacles inside the wooden boards that comprised the cover and back of the manuscript. These are just a couple of examples, but one medieval scholar, after surveying 3,000 manuscripts in the U.S. told Erwin he’d only found one example of a pair of ancient spectacles being left behind in a book.

But when it comes to medieval books, we really have the back page to thank for all of these fascinating discoveries.

Many decided their manuscripts were the best place to practice doodles…

It’s where medieval scribes practiced their doodles and tested their quill pens. Many of these doodles were quite whimsical, Erik Kwakkel, a professor of Book History at the iSchool at the University of British Columbia notes. Perhaps the artist above was having a good laugh. Or perhaps he was testing his quill. Bird feathers were the common writing instruments of the day and scribes in medieval times waxed elegant and humorous. As in the drawing above these drawings were often incorporated inside capital letters.

But in many cases, that last page is a beginning, rather than an ending. Kwakkel notes this is the page where we find out the most about the book’s author. The place where the scribe informed readers where he gleaned his information. This page was also where writers tested that new quill, which needed to be cut several times a day.

And beautiful images like the one below were the result.

That last page of the book was the place for artistic flights of fancy, Kwakkel notes.

“Thus the last page of the book becomes a test ground for artistic creations; it makes for an attractive last thing to glance at before closing the book,” he writes.

These wondrous medieval manuscripts provide us with a glimpse into a world long vanished. Full of familiar things and yet so far removed from the lives we live today. Our beloved books now have safe harbor in our public libraries, and on our night tables and bookshelves. Precisely where they belong.

Bodleian Library University of Oxford – History of the Bodleian

“‘Do Not Give Your Books to Children’ and other medieval tips for taking care of books.” The Dutch Anglo-Saxonist/Blog and Homepage of Thijs Porck, June 24, 2016.

“Centuries Ago, A Cat Walked Across This Medieval Manuscript,” Smithsonian.com, March 12, 2013

“What Is The First Folio?” Folger Shakespeare Library

“The Making of A Medieval Book” (Getty Exhibitions)