85 Year Old Prime Minister Wheelbarrowed a Donation of 32,000 Books between his Home and the Library in this Touching Story 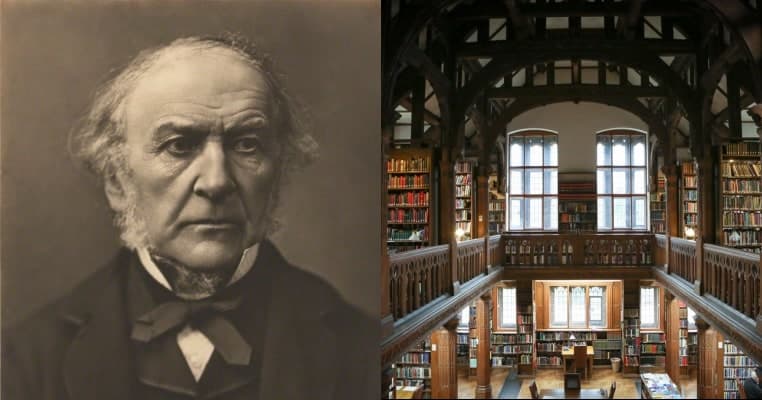 85 Year Old Prime Minister Wheelbarrowed a Donation of 32,000 Books between his Home and the Library in this Touching Story

William Ewert Gladstone (1809 – 1898) was nothing if not industrious. Born in Liverpool, he enjoyed a long and distinguished political career in Britain’s Liberal Party, serving as prime minister on four separate occasions. He was immensely popular: the “people’s William,” the “Grand Old Man,” and the liberal rival of the establishment’s darling, Benjamin Disraeli. Gladstone may have lacked the easy charm and charisma of Disraeli, his Tory prime ministerial counterpart, but what he missed in stagecraft he made up for by being studious and hardworking: qualities which would culminate in the construction of Gladstone’s library.

The rationale behind Gladstone’s library, still the only residential library in the UK, was the convergence of two of the great man’s main passions. The first related to his libertarian values, the core creed of which preached open opportunity, free trade, and constitutional reform aimed towards creating social equality. The second was his lifelong love for reading. Gladstone read widely and voraciously, nourishing his intellect and deepening his education from the cradle to the grave. As his daughter would one day remark, when asked about the reason behind her late father’s public library, Gladstone had wanted “to bring together books who had no readers with readers who had no books”.

To best understand the story behind Gladstone library, we must look back to Gladstone’s early life. After graduating from Eton College, he was awarded a place at the University of Oxford where he studied Classics and Mathematics. Surprisingly, during these years Gladstone was a proud and practicing Tory. The later Liberal prime minister wouldn’t convert to liberalism until later in life. However his time spent politicking and debating did wonders for his studies, and Gladstone came out with a double first, demonstrating his intellectual versatility and academic excellence.

In 1832, he entered the House of Commons as a Tory MP. Here in Parliament, Gladstone gained a reputation for loquaciousness. His speeches, which were seldom short, were colored with so much classical and biblical allusion that his peers must have sometimes felt they were attending a poetry recital rather than a parliamentary session. Gladstone still in fact holds the record for the longest budget speech ever delivered in the UK Parliament — four hours and 45 minutes; a marathon of a monologue throughout the whole of which the Liberal prime minister kept himself hydrated by liberally swigging from a curious concoction of sherry and egg.

Aside from the drinking, Gladstone’s public and political life were characterized by the most upright conduct. Certain aspects of his private life, however, paint a rather different picture of the People’s William. In the 1840s, Gladstone started upon his self-styled “rescue work”, a social mission aimed at rehabilitating London’s prostitutes and removing them from the streets of the capital by means of gainful employment. His motives may seem innocuous enough, but Gladstone was no stranger to sex.

He had a penchant for pornography—a lucrative business even in the Victorian Age—and admitted the excitement he derived from meeting ladies of the night out on the cold streets of Britain’s capital. By 1849, he had begun to scourge himself as an act of penance for the occasions on which he “courted evil”. Clearly there existed a considerable tension between his deeply held Anglo-Catholic convictions and suppressed sexuality. But alongside this ran charitable motives: motives that would come to the fore at the construction of Gladstone’s library.

To call the task of building Gladstone’s Library laborious would be an understatement, even if the man undertaking it wasn’t already well into his eighties. Accompanied by his valet and one of his daughters, and armed with nothing but a wheelbarrow and a whole lot of willpower, Gladstone personally transferred 32,000 tomes from his personal collection some three-quarters of a mile from his residence at Hawarden Castle to the site of the library.

Because Gladstone’s library was populated with books built up over the whole duration of great politician’s long and studious life, it should come as no surprise that the themes of its corpus was varied. The big three subjects, however, were theology, literary theory, and history and politics. But it wasn’t just the books that Gladstone contributed. He also invested £40,000 of his hard-earned money towards building the “Tin Tabernacle”, as the original building was called for reasons that are patently apparent from the photograph above.

He consecrated the library on December 23, 1895, and I use the word consecrate deliberately. Writing in his diary on the day of its dedication, he penned: “I have this day constituted my trust at St Deiniol’s. The cost of the work has been I think £41 to £42,000, including some charges of maintenance to Dec. 31. 95. May God of His mercy prosper it.” The entry’s reverential tone may come as a surprise to the modern reader, and seems to speaks volumes of the mission Gladstone believed he was carrying out. The eagle-eyed among you will have picked up on something else in the entry though — that he referred to the building not as Gladstone’s library but as St Deiniol’s.

St Deiniol was the name Gladstone originally gave to his residential library, though why he picked this sixth century Welsh saint in particular remains something of a mystery. But after his death three years later, plans got underway to build a new, permanent library. A fervent public fundraising initiative raised £9,000 in the years following his death, enough to enable the design and construction of the library that stands today. Designed by John Douglas, it was officially opened by Gladstone’s aristocratic confidant, Earl Spencer, on October 14, 1902. It would host its first residential guests four years later.

You can still stay at Gladstone’s library and sleep among the books. The library is home to 26 boutique, en-suite bedrooms which are the perfect place to read and relax. Guests staying over at Gladstone’s library have access to the collection from 9am until 10pm (five hours after it shuts to the general public) and are allowed to take books back to their rooms so they can burn the midnight oil and read into the early hours.

William Gladstone died on May 19, 1898, aged 88. Contemporaries recorded the cause of death as “Syncope, Senility”, a diagnosis we might misconstrue today to mean the decline of one’s mental faculties. It was, in fact, age-related heart-failure that claimed the great Victorian. Fortunately for lifelong learner, he retained his mental faculties until the end. As befitted a man of such magnitude, Gladstone’s funeral was spectacular. It took place at a packed-out Westminster Abbey, where 2,500 people had gathered to pay tribute to the late, great politician.

The Prince and Wales and Duke of York counted among his coffin’s pallbearers, and the big names of the Victorian Age’s twilight years read out the tributes and eulogies. Every eulogy sang praises of the late, great Gladstone. That characterized by the most pathos, though, came from Mr. James Bryce, who said, “I cannot recall any other case in which the whole nation has followed the setting of the sun of life with such sympathy, such regret, and such admiration.”

Gladstone remains the only British prime minister to have bequeathed a residential library; a trend which appears to have taken off with far more much success in the US, starting with Franklin. D. Roosevelt. But Gladstone’s library wasn’t the only contribution Gladstone made to the bibliothecary world. Running beneath the Bodleian Library at Oxford University, where Gladstone studied, is a modern underground library called the “Gladstone Link.” Some might think the name reflects the usual practice of naming a building after a distinguished alumnus. But they would be wrong.

Gladstone’s library wasn’t the only contribution the great Victorian made to the bibliothecary world. Running beneath the Bodleian Library at Oxford University, where Gladstone studied, is a modern underground library called the “Gladstone Link.” Some might think the name reflects the usual practice of naming a building after a distinguished alumnus. But they would be wrong.

Home to more than 270,000 books, most of which are stored away on rolling stacks, the Gladstone Link instead derives its name from the inventor of an ingenious catalogue system, the man himself, William Gladstone. He devised this space-saving system to accommodate the constant influx of publications to the Bodleian, which as a legal depository is required to keep a copy of every book published in the UK.

This is no small task, and even with Gladstone’s rolling stacks. And with an influx of some 5,000 books a week the library has been forced to outsource its collection to the surrounding area. But Gladstone’s legacy lives on. In name, it lingers through his residential library in Wales and the underground library in Oxford. In history, it endures through the vast bodies of literature that celebrate his life, and the libraries across the world where you can find them.

A Message From Peter Francis, Warden And Director – Gladstones Library