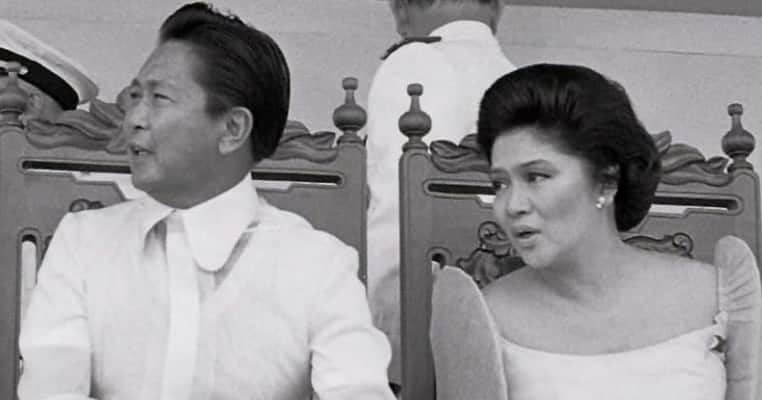 In 1976, Filipino journalist Primitivo Mijares wrote The Conjugal Dictatorship of Ferdinand Marcos and Imelda Marcos, a tell-all that spilled the beans about the Philippines’ dictator and his wife. The phrase “Conjugal Dictatorship” caught on and entered the Philippines’ political lexicon, to describe the power held by Ferdinand and Imelda Marcos. It was especially applied to Imelda, who held numerous government positions that transformed her into a political power in her own right, and thus wielded more influence than typical of a First Lady.

Writing and publishing a book critical of the Philippines’ corrupt power couple was a courageous act. However, because it happened in real life and not the movies where courageous good guys usually come to a good ending before the final credits roll, Primitivo Mijares paid dearly. He disappeared soon after publishing his book. His son Boyet Mijares was found dead later, after he was brutally tortured and dropped from a helicopter. It was swept under the rug by Filipino police, who claimed that it was a case of college fraternity roughhousing and hazing that had gone wrong. However, Boyet Mijares was not in college: he was still in high school, a year away from graduating.

Ferdinand Marcos, The Male Half of the Conjugal Dictatorship

Ferdinand Edralin Marcos (1917 – 1989) was a lawyer who entered politics in 1949. From early on, he was one of those compulsive liar types, given to telling brazen whoppers that were easily debunked. However, he correctly reasoned that his supporters would neither check nor believe anything negative about him, and that his opponents were opponents, and thus did not matter. One of his favorite lies was that he had played an active part in World War II, and had fought alongside the Americans in the Bataan Death March. He eventually claimed that he was “the Philippines’ most decorated war hero”. US Army documents describe Marcos’ claims as “absurd” and “fraudulent”.

His real life story, while lacking wartime heroics, was interesting enough. The son of a prosperous lawyer and politician, Ferdinand Marcos first gained fame – or infamy – while still a teenager, when he was charged with assassinating one of his father’s political opponents in 1933. He was tried and convicted, but the conviction was overturned on appeal by the Philippines’ Supreme Court. While the case was pending, he graduated from the University of the Philippines’ College of Law and passed the bar exam – although the Supreme Court lowered his grades after he was accused of cheating. He became a trial lawyer in Manila.

An ROTC member in college, Marcos was activated as an officer when Japan invaded the Philippines. Although he played little or no part in the war, Marcos invented a mythology in which he had been a heroic guerrilla leader during the Japanese occupation (1942 – 1945). It was enough to get him elected to the Filipino House of Representatives in 1949, and the Senate in 1959. He became Senate President, then ran for the Philippines’ presidency, winning a bitter election in 1965, and a controversial reelection in 1969.

His administration, especially in its second term, was plagued by mounting protests and student demonstrations. So in 1972, Marcos did away with democracy and imposed martial law. Habeas corpus was suspended, political opponents were jailed, tortured, murdered, or disappeared, and the Filipino military was transformed into an arm of the Marcos regime. Martial law lasted for a decade, during which Marcos assumed extraordinary powers and ruled as an authoritarian dictator.

The regime had already been marked by corruption and shadiness when Marcos ruled as a democratically elected president. After declaring martial law and switching to a dictatorship, without even the pretense of checks and balances, the Marcos regime became globally infamous for its corruption, extravagance, and brutality. Authoritarian strongmen and corrupt dictators were not unusual during Marcos’ years in power, but two things distinguished and set the Philippines apart. First, was the sheer brazenness with which Marcos and his cohorts engaged in their corruption. Second was the prominent role played by Ferdinand Marcos’ wife, Imelda. In an era when First Ladies were usually kept in the background, Imelda Marcos stepped to the forefront as an unabashed and unapologetic participant in her husband’s kleptocracy.

The Corruptocracy of Ferdinand and Imelda Marcos

In 1954, Ferdinand Marcos, then an up and comer congressman, married Imelda Remedios Trinidad Romualdez (1929 – ), a singer and beauty queen who hailed from one of the Philippines’ most prominent families. It was a good match – not for the Philippines, but for the couple: Imelda Marcos was a shrewd operative whose political instincts and ambitions matched and complemented those of her husband. She became known as the “Steel Butterfly” because of her combination of fashion sense and ruthless resolve.

As First Lady of the Philippines after her husband declared martial law and ruled as dictator, Imelda Marcos held various government posts, including Governor of Metropolitan Manila (1975 – 1986) and Minister of Human Settlements and Ecology (1979 – 1986). She took full advantage of her access to power to enrich herself with rampant corruption and blatant graft. She also appointed many of her relatives to lucrative governmental and industrial positions, from which they proceeded to loot the Philippines. Soon, the First Family was worth billions, stashed in Swiss bank accounts, laundered in real estate across the US such as shopping centers and high rises, plus posh mansions all over the world, including London, Rome, and Honolulu.

Before long, the entire regime was marked by rampant corruption. The Philippines became an out and out kleptocracy, in which the ruling couple, along with their relatives, favorites, and insider supporters, plundered the country at will. The rot became institutional and entrenched, reaching down from the top to the lowest rungs of government. Such endemic corruption fueled and exacerbated economic stagnation, and a steadily widening gap between the country’s rich and poor.

One thing that stood out about Imelda Marcos’ corruption in particular was her apparent obsession with expensive designer shoes – and “obsession” was no hyperbole. During the Conjugal Dictatorship, the Philippines’ First Lady earmarked a significant portion of the proceeds of her corruption and graft to splurging on extremely pricey shoes, eventually accumulating thousands of pairs. When the Marcos regime finally fell and protesters stormed one of Imelda’s palaces, they discovered over 2700 pairs of designer shoes in her wardrobe. Thousands more of her designer shoes were discovered in other palaces, mansions, and villas throughout the Philippines. A single pair of those pricey pumps could cost more than an entire city block in a lower class Philippine neighborhood earned in a year.

By the early 1980s, Ferdinand Marcos’ health began to fail him, and Imelda stepped up, wielding ever greater power, and widening her network of graft. As misgovernment grew, and the Filipino economy faltered, opposition to the Conjugal Dictatorship mounted. The first cracks appeared in 1983 when opposition leader Benigno Aquino, Jr., imprisoned for seven years by the Marcos regime after martial law was declared, returned to the Philippines after years of self imposed exile in the United States. He was shot dead as soon as he stepped off the airplane at Manila’s airport. That set off massive antigovernment protests, and Ferdinand Marcos was forced to appoint an independent commission to investigate the assassination.

The People Power Revolution and the Overthrow of the Conjugal Dictatorship

The Conjugal Dictators had hoped that the independent commission appointed to look into the assassination of opposition leader Benigno Aquino would whitewash the affair. However, and to the consternation of Ferdinand and Imelda Marcos, the commission actually exercised its independence. In 1984, it investigation concluded that high ranking officers in the Philippines’ military had been responsible for assassinating the opposition leader.

The commission’s findings complicated things for the regime. Under mounting pressure, both domestic and international, the officers accused of Aquino’s assassination were put on trial. The regime had failed to manage the independent commission’s investigation, with disastrous consequences. It learned its lesson, and made doubly sure to manage the trial – no difficult task, as the regime’s corruption and rot had by then spread to and permeated the Philippines’ criminal justice system. In 1985, the accused were duly acquitted, in what was widely perceived as a whitewash and a miscarriage of justice.

Popular protests erupted anew, and to reconfirm his legitimacy and mandate, Ferdinand Marcos called for a snap election in 1986. He was challenged for the presidency by Curazon Aquino, widow of the assassinated Benigno. Unsurprisingly, the election was marred by rampant fraud and violence, and Marcos was “officially” declared the winner, despite the widespread consensus of independent observers that he had lost. Election computer technicians walked out to protest the manipulation of the results in favor of Marcos, and they were protected by a faction of reformist military officers who had finally had enough of the Conjugal Dictatorship.

Massive protests, which came to be called the People Power Revolution, swept the Philippines. The military fractured, and a faction sided with the public against the higher ups who had hitherto defended the regime. When Marcos’ defense minister jumped ship and sided with the protesters, the jig was up, and the kleptocrat couple were forced to flee the country. By then, they had stashed enough wealth overseas, that they were able to afford a comfortable retirement in Hawaii. However, they were unable to take everything with them, and when protesters stormed the couple’s palaces, they found evidence of an extravagant and opulent lifestyle.

After the regime, Imelda Marcos’s shoes were publicly displayed as a symbol of the regime’s corruption. Hundreds of her shoes found a permanent home in the Shoe Museum, in the northern city of Marikina, and the collection became a symbol of excess in a country where many walked barefoot in abject poverty. However, because life is often unfair, neither of the Conjugal Dictators ever paid for their misdeeds. Ferdinand Marcos died in comfortable exile in Honolulu, in 1989, and Imelda Marcos was eventually allowed back in the Philippines. She was elected to the national legislature, and as of 2018, she was one of her country’s wealthiest women. She even turned the shoe scandal into an asset, and has been a frequent visitor to the Shoe Museum. There, Imelda Marcos routinely signs autographs and proudly poses for photos next to the display cases.­­­­­­­­­­­­­­­­­