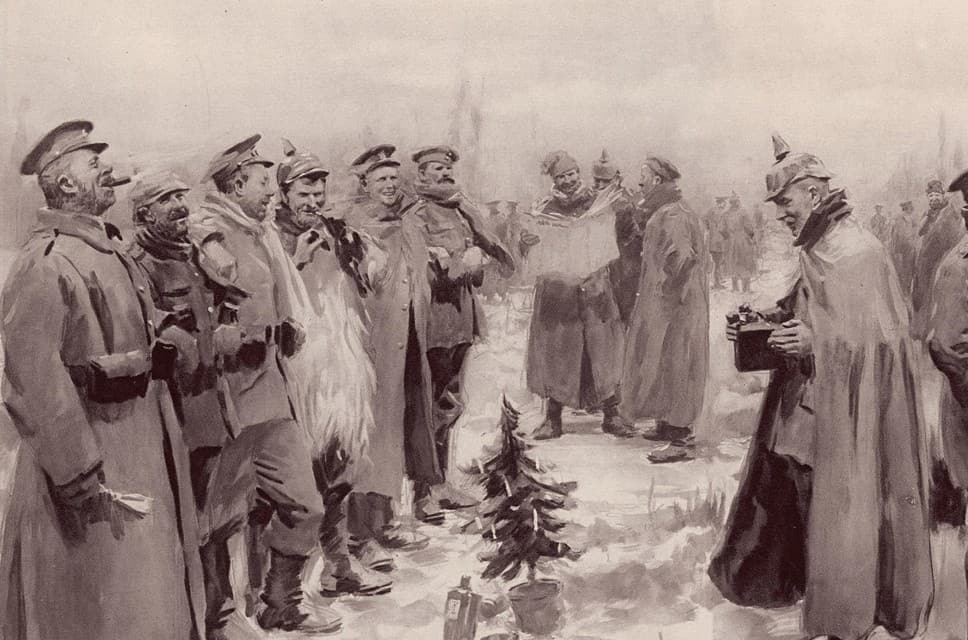 When we think of World War I, the last thing you might think about is Christmas. But in December of 1914, soldiers proved that even in the darkest times, the holiday spirit can brighten almost any mood. Men who go to war do not always hate their enemy. Or, they are not even sure what they are fighting for. Most of the time, soldiers are acting on behalf of the wishes of their kings and politicians, and not because they have some kind of personal vendetta.

The power of holiday cheer has never been illustrated so clearly as the Christmas Truce of 1914. For one night, French, German, and British soldiers put down their weapons and had a last-minute party together with the men across enemy lines to exchange gifts, sing carols, and even play a football match. The Christmas Spirit was never as strong as it had been that night, and has gone down in history as being one of the greatest memories of The Great War.

German and British Soldiers Battled on the Western Front

In December of 1914, soldiers had been battling since July. Even though it had only been a few months, they had expected World War I to already be over. They would have no idea that the war would rage on for another 4 more years. Soldiers were still required to do their duty, but they didn’t exactly feel motivated to kill one another anymore. French, German, and British soldiers were not fighting against people they considered to be terrorists, and the Nazi party wasn’t trying to take over the world until the second world war. In a lot of ways, men weren’t even really sure why they were fighting one another in the first place. Both sides were told that they were fighting for “freedom”, but many were misinformed through propaganda.

After months of fighting, the troops decided to have a “live and let live” attitude to battling. Soldiers on the Western Front treated one another with dignity, and treated battle like they were just showing up to clock into a 9-5 job. They got into a routine of allowing both sides to take breaks for lunch at the same time before resuming firing at one another. There were also regular breaks that both sides took to bury their dead, and they respectfully looked the other way, knowing that they might be the ones who needed to bury their own brothers soon.

Life in the trenches was beyond awful, especially in the winter time. Even without fighting one another, they were fighting against nature to stay alive. They were dug so close to the water table, that they would often fill up with water, and the ground became like quicksand. Sometimes, the trench would collapse and kill men in a mini mudslide. There were plenty of days when it was just too difficult to survive in the cold and stay alive, and they couldn’t even fight each other. Even on days with good weather, they often had to rebuild their trenches, and couldn’t fight anyway. So, in the month leading up to Christmas, there truly was not much fighting going on, anyway.

The British Women’s Suffragists contacted the Pope, and wanted to arrange for a 20-day ceasefire so that the soldiers could come home for the holidays. However, the generals did not give in, and there were plenty of people on the home front that were far more cynical about taking a break from war for the holidays. An American newspaper called The New Republic wrote this about the idea of an armistice; “Incense and tinsel will heal no wounds. It would be so empty, that it jeers at us.”

On Christmas Eve, The Soldiers Decided to Party

Despite the Officer’s best efforts to quash the soldier’s palling around, the Germans and English troops became more and more friendly over the month leading up to Christmas. They often tossed newspapers and cigarettes to one another over the lines.

Leading up to Christmas, the troops were receiving gifts of scarves, gloves, pipes, cigarettes, and so much more from donations and family members. The English princess, Mary, wanted to give every man a gift, but she wouldn’t have enough money from her own personal allowance. So, she raised money from British citizens for her “gift fund”. She petitioned to the British citizens, “I want you now to help me to send a Christmas present from the whole of the nation to every sailor afloat and every soldier at the front. I am sure that we should all be happier to feel that we had helped to send our little token of love and sympathy on Christmas morning, something that would be useful and of permanent value, and the making of which may be the means of providing employment in trades adversely affected by the war.”

After raising the funds, she sent every English soldier a brass snuff box that was engraved with her image, chewing tobacco, a carton of cigarettes, and photos of the king and queen. The German soldiers got a box of cigars from the Keiser and a pipe with an image of the crowned prince. Then, of course, some of the men got care packages with chocolate, letters, cards, hand-knit scarves, gloves, and other presents from their friends and family.

On Christmas Eve, the weather was finally beautifully calm, and snow laid on the ground. German soldiers set up tiny Christmas trees above their trenches, and began to sing Silent Night. The English soldiers took out their binoculars, and spotted the lights in the distance. At first, they thought this might be some kind of attack, until they heard the singing. Lieutenant Sir Edward Hulse ordered his men to sing as well, only louder and stronger than the Germans. They countered with their own carols, and the two would go back and forth, as if they were battling through song. Eventually, the two sides sang all in unison, and they truly were able to have a “silent night” in peace. The next morning, a single brave soldier came out waving a newspaper as an impromptu white flag, which was a sign of peace. At first, the soldiers were cautious, of course. They thought that this might be a trap.

Slowly and cautiously, the soldiers began to stand up and slowly make their way towards one another, with their arms raised. Finally, they were able to shake hands with one another and finally meet these men that they had been so distant and yet strangely intimate with for all of that time. The English soldiers were sent thousands of cigarettes for Christmas, and of course, not every man smoked. During the party, the men traded gifts with one another, especially if they were sent something more useful, like an extra warm blanket. Some men who were once barbers decided to give out free haircuts and shaves to the men who needed it. The two sides played football (that’s soccer, for Americans reading this story), and let out their competitive spirit in sport, instead of fighting. They could hear the battles still raging on in the distance, however, and eventually had to return to their post, knowing that they would have to go back to battle with one another the next day.

Not All Of The Soldiers Were Down For Christmas Cheer

Of course, as you might imagine, there were some soldiers who took the war very seriously, and they were not in the mood to party or have any sort of armistice at all. Not everyone was excited to put down their weapons and show a sign of peace towards the men who were just trying to kill them only a day earlier. Several regiments up and down the Western front continued to battle, and the Belgian and French soldiers refused to acknowledge that Christmas was different than any other day of the year. Even in the midst of the parties, many soldiers opted to bury their dead, fortify the trenches, and even scope out enemy supplies. The Bavarian troops stopped to listen to Christmas mass, but then moved on to their regular duties.

Not every regiment along the British front lines decided to part in the truce, of course. And some of the brave men who tried to wave the proverbial white flag were gunned down before a party could even get started. But for those that decided to put down their weapons, they were able to see that the light of human compassion can shine through, even in the darkest moments. These beautiful memories of that Christmas lived on in the minds of the soldiers forever. After the war was over, a monument to remember that day was erected in Frelinghien, France.

Even though the story is fondly remembered today, army leadership did not want the stories of this party to get out. Whenever soldiers wrote about it in letters to their loved ones, the letters were intercepted before they could be made public. After the war was over, however, many of the men told their families, and the letters about the day written by Sir Edward Hulse, the 7th Baronet were published after his death. This gave the full details of the Christmas Truce. Once the word got out, the story was incorporated into dozens of books, movies, TV shows, and even commercials. It still goes down in history as being one of the most well-loved European stories of World War I.