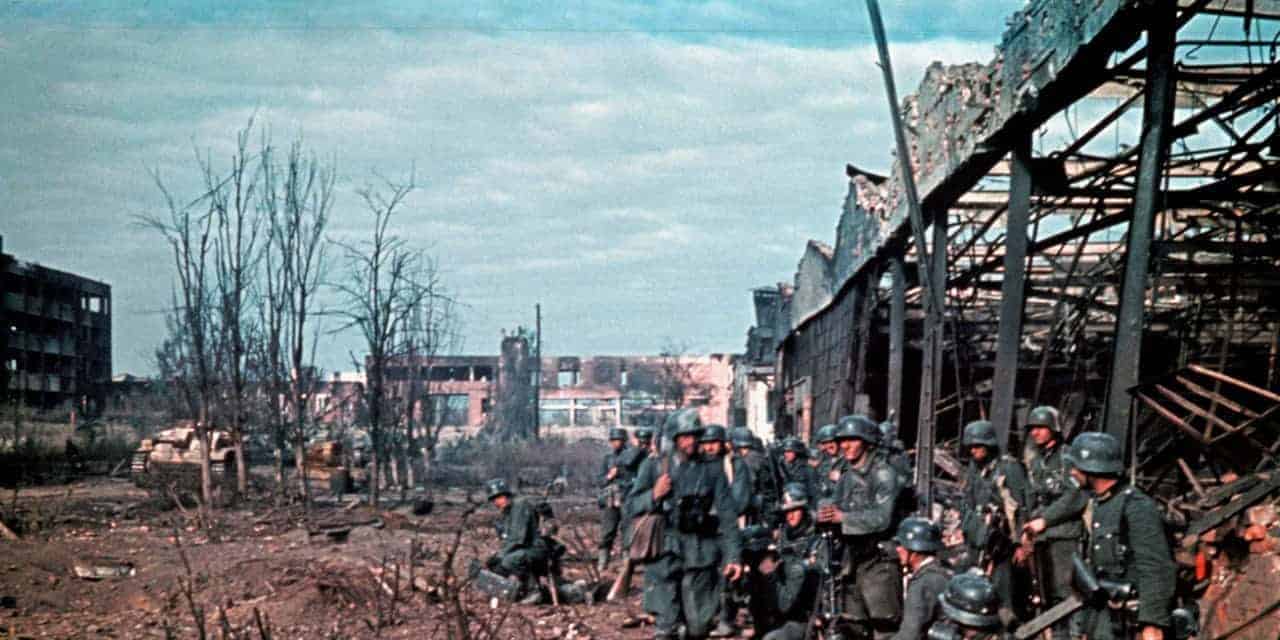 On 24 August 1944, Hitler declared Breslau to be a ‘closed military fortress’ and outlined that it must be defended at all costs. It took several months but by the middle of January 1945, all civilians had been evacuated and Breslau finally because the fortress Hitler had ordered. However, most of the transport links had been destroyed by Soviet air bombing so evacuees had to leave on foot. Up to 100,000 people died during this botched operation.

The defenders of Breslau were a ragtag group of retreating regiments, police officers, Hitler Youth and even WWI veterans! Estimates on the number of defenders in the city vary widely from 50,000 to 150,000. The Soviets began to close in and had the city surrounded by 15 February although the siege had officially started two days earlier. The Luftwaffe desperately tried to keep the city supplied with food and water but Breslau continued to be bombarded by heavy Soviet artillery.

The Soviets attacked the city aggressively but lost up to 70 tanks in the first three days of the siege. The conflict descended into vicious street fighting and parts of Breslau were destroyed and the brick was used to create new defensive positions. The Nazis tried and failed to build an airstrip and an estimated 13,000 people died during this doomed project in March. Another Soviet offensive began on 1 April and most of Breslau was engulfed with flames.

The Nazis were forced to relocate to the University Library from their previous HQ which had been a bunker on Partisan Hill. The remaining citizens of Breslau launched an uprising which was brutally suppressed by the Nazis. They continued to fight even when it became apparent it was a hopeless cause. The city finally surrendered on 6 May. This was just two days before Germany’s unconditional surrender in World War II. Yet again, casualty estimates vary. Some figures suggest that up to 170,000 civilians died while up to 60,000 Russian soldiers perished. Approximately 70% of Breslau was destroyed during the siege.

This was arguably the single most important event in World War 2 and one of the most significant military events in history. It was a huge battle for control of the city of Stalingrad which was the Soviet center of communications in the south as well as being a major manufacturing location. As the Germans marched through Russia, Hitler ordered his 6th Army and 4th Panzer Army to take Stalingrad. What transpired was several brutal months of fighting in a siege that changed the course of the war.

The sheer scale of the conflict was something the world had seldom seen. The German commander, Freidrich Paulus, had over 1 million men at his disposal and began his offensive on 23 August 1942. The ground soldiers were supported by Luftwaffe air strikes which quickly turned Stalingrad into rubble. Although the Germans had some success and took a large proportion of the city, they could never gain control. At times, areas they took during the day were reclaimed by the Russians at night!

By 19 November, the Soviets were ready to launch a counter-offensive. Operation Uranus targeted the weak Hungarian and Romanian troops protecting the German flank. This was a decisive move as the Soviets successfully trapped the German forces in the city. The Soviet commander, Marshal Georgy Zhukov, split his 1 million man army into six forces and completely surrounded Stalingrad. Now, the 250,000-300,000 German soldiers had nowhere to go.

Hitler ordered Paulus to stand and fight to the last man and last round of ammunition. Had Hitler not issued this order, it is possible that Paulus and his army could have escaped because there was a small window of opportunity right at the beginning of the Soviet offensive. However, he was ordered to stay and the Germans had to face the Red Army and the biggest enemy of all, the Russian winter.

Slowly but surely, the starving and frozen German army were whittled down by the enemy, the weather and the lack of provisions. Eventually, Paulus had no option but to wave the white flag as his army’s supplies were virtually gone by the end of January 1943. Paulus surrendered his army in the north of the city on 31 January while General Schreck surrendered the army in the south on 2 February. There were an estimated 2 million casualties at Stalingrad; approximately 478,000 Soviets alone died during the siege.