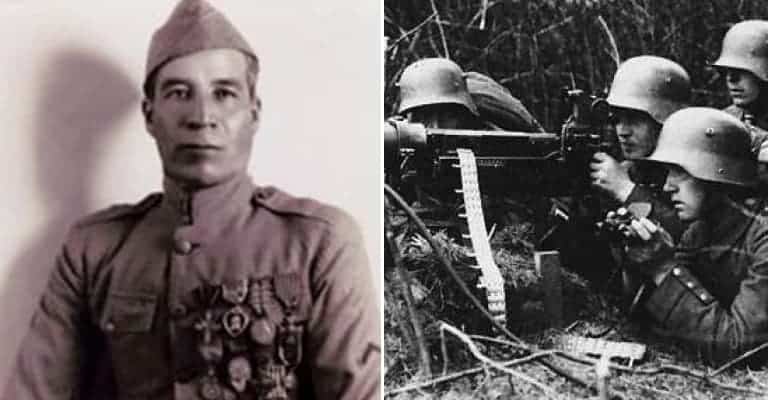 Marcelino Serna, one of the United States’ greatest heroes of World War I, was an undocumented Mexican immigrant. Throughout his life, he was one of America’s most overlooked heroes of the Great War, notwithstanding that he was Texas’ most decorated soldier from that conflict. He was also an illegal immigrant, who had only signed up to enlist in the US Army in order to avoid getting deported back to Mexico.

Serna was born into a dirt poor family in Chihuahua, Mexico, on April 26th, 1896, and when he was 20 years old, he decided to seek a brighter future north of the border in the United States. So he crossed the Rio Grande in 1916, and made it to El Paso, Texas, but speaking no English, all he could manage were a series of low paying jobs. So he left the Lone Star Republic, and made his way to Colorado, where he found a better paying gig picking sugar beets in a farm near Denver. It was backbreaking work, but the pay was better than anything he had encountered before, so he kept at it.

Serna Enlisted in the US Army to Avoid Getting Deported

While Serna was sweating it out and toiling in the fields, the United States, whose president, Woodrow Wilson, had been reelected in 1916 with the campaign slogan “He Kept Us Out of the War!“, found itself getting drawn ever closer into the conflict. America had almost joined the fray in 1915, when a German U-boat sank the ocean liner Lusitania, leading to the death of 128 Americans, but war was avoided when the Germans eased off on the submarine warfare.

By 1917, Germany was desperate, and to knock out Britain, it announced unrestricted submarine warfare against all ships approaching British waters. That directly challenged America’s position that freedom of the seas should be absolute for neutrals. Between that and a harebrained scheme by a German Foreign Office official, Arthur Zimmerman, to get Mexico to declare war on the US in exchange for the territories lost in the Mexican-American War, war was declared against Germany in April of 1917. With war came conscription, and as officials fanned out across the country to ensure that the draft was properly enforced, Marcelino Serna got entangled with them.

During a trip from his workplace in the beet farm to nearby Denver, he was detained by federal enforcement authorities who were checking the legal status of men of draft age. He ended up locked up in a local jail while officials tried to verify his immigration status and eligibility for the draft. He had no legal status, so after seven days behind bars, he got tired of waiting, and in order to avoid getting deported back to Mexico, he volunteered to enlist in the US Army.

Despite hardly speaking any English, he managed to make it through basic training. He was then sent to join the American Expeditionary Force in France, and was assigned to Company B, 355th Infantry Regiment, in the 89th Division. Once he got to the trenches, his unit realized that he was not an American citizen, and his company commander informed Serna that as a Mexican national, he did not have to be there. So he was offered a discharge. Although it would have been quite understandable had Serna taken it, considering it was not his war but that of a country he had only lived in for less than a year, he declined. A stand up guy, he chose to stick with his comrades.

That set up the stage for Serna’s moment to shine, which came in the run up to America’s moment to shine in the Great War: the Meuse-Argonne Offensive. By 1918, America’s allies, the Entente Powers of Britain and France, were exhausted by years of ceaseless bloodshed. The British were nearly bankrupt, while the French were bankrupt and demoralized, their army having recently staged a widespread mutiny after one bungled offensive too many. Fresh American troops such as Marcelino Serna, full of fight and not yet worn out and dispirited by the tragedy of trench warfare, were to tip the balance in the Entente’s favor.

Serna’s heroics began when his unit was ordered to move towards the Meuse river and Argonne Forrest in northeastern France. It was an opening move, preparatory to the Meuse-Argonne Offensive, which became the largest offensive in US military history, involving 1.2 million American soldiers. As a preliminary, the Americans had to straighten out a salient – a massive engagement in its own right, involving 550,000 US troops and 110,000 French ones, known as the Battle of Saint-Mihiel.

At Saint-Mihiel, Serna’s unit stumbled into the kill zone of a concealed and well positioned German machine gun nest manned by 14 soldiers. Within seconds of the Germans opening fire, 12 Americans were killed, many more were wounded, and Serna’s unit’s advance came to a halt. As the shocked survivors were pinned down, desperately scurrying for cover from enemy fire, private Serna demonstrated what he was made of, and sprang into action to rescue his comrades.

He volunteered to scout an alternate path, but once he got ahead of his unit, he saw that the enemy position was vulnerable to a flank attack from the left. So without orders, and acting on his own initiative, he used minor and barely perceptible folds and dips in the terrain to alternately crawl and rush to the German position’s left flank. Braving a torrent of angry bullets buzzing around him, two of which actually struck his helmet, Serna got close enough to the enemy machine gun nest to lob grenades into its midst. He tossed four grenades into the German position, and of its 14 occupants, the commander and five others were killed, and eight stunned German survivors were forced to throw in the towel and come out with their hands up.

That would not even be Marcelino Serna’s greatest feat of wartime heroism, but just an opening act. Two weeks later, on September 12th, 1918, on the first day of the Battle of Saint-Mihiel, Serna and his comrades were engaged in combat in the Meuse-Argonne region, when he spotted a German sniper. With his Lee Enfield rifle, Serna drew a bead on the sniper and fired a bullet that wounded the enemy soldier, who then tried to make it back to the safety of his comrades.

Acting again on his own initiative, Serna followed the wounded sniper, who led him to an enemy trench packed with about 50 German soldiers. Once again, private Serna demonstrated just how well he knew how to read and make use of the terrain to get close to the enemy. He crawled until he reached an advantageous position within grenade lobbing range of the enemy, then went into action, tossing three grenades into the packed German trench.

He then opened fire with his rifle and pistol on the stunned survivors. Alternately moving to a new position after every few shots, Serna tricked the Germans into believing that there were plenty more American soldiers all around them, not just Serna acting on his lonesome. Within minutes, 24 Germans surrendered, and another 26 enemy soldiers lay dead. Serna remained on the front after his greatest feat of heroism, fighting alongside his comrades until he was wounded 4 days before the war ended.

America’s greatest hero of WWI, then-corporal Alvin York, had gone on a mission with 16 other men, and when they came under murderous fire, he went on a solo lethal rampage. By the time it was over, he had single handedly killed 28 Germans and convinced dozens more to surrender. For that feat, York was deservedly awarded the Medal of Honor. Private Marcelino Serna had gone off against the Germans not as part of a group, but on his own, and done pretty much what corporal York had pulled off. With his daring, intrepidity, and skill at arms, Serna had killed 26 German soldiers, and captured an additional 24.

On top of that, while escorting his prisoners back to friendly lines, an American sergeant stopped him and directed him to execute the captives, to which Serna replied with an emphatic “cabrÃ³n! No!” His heroics and moral courage should have earned him a Medal of Honor, but in the day’s rampant racism, that was not to be. Indeed, no minorities whatsoever were awarded the Medal of Honor during World War I. The powers that be decided that was too prestigious an award to bestow on a Mexican, let alone an illegal Mexican immigrant.

Serna’s commanding officer told him that he would never get the Medal of Honor, claiming that it was never awarded to privates. And Serna could never rise higher than private, because he spoke almost no English. He was instead awarded America’s second highest decoration, the Distinguished Service Cross, in 1919. He would not have been awarded even that, were it not for the personal intervention of and insistence by the AEF’s commander, general Pershing, that Serna deserved a medal. Serna also received a French Medaille Militaire, as well as a Croix de Guerre With 2 Palms, and an Italian Croce al Merito di Guerra, among other awards from America’s allies.

After recovering from his wounds, Serna returned to America and settled in Texas, as that state’s most decorated World War I soldier. He was naturalized as a US citizen in 1924, then got married and raised a family in El Paso, where he got a job in a packing company. He eventually became a plumber in El Paso’s William Beaumont Army Medical Center, and worked there until his retirement in 1960. He died in 1992 at age 95, and was buried in El Paso’s Fort Bliss National Cemetery. In 1995, legislation was first introduced in Congress, requesting that Serna finally be awarded a Medal of Honor. To date, such efforts have gone nowhere.