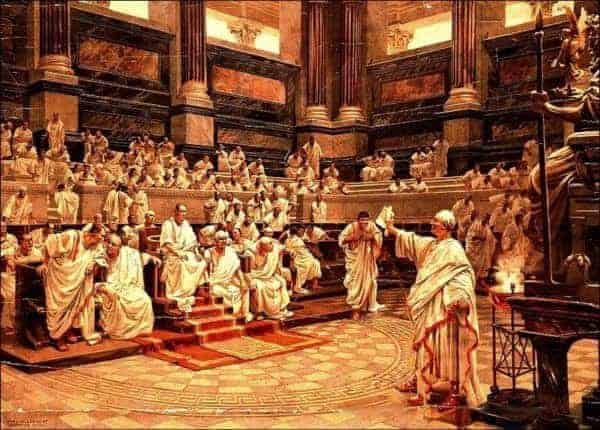 If a terrorist is defined as someone who uses violence and intimidation as a means of pursuing political aims, the Roman senator Catiline must surely be classified as one. Lucius Sergius Catalina, also known as Catiline, is infamous for his role in a conspiracy to overthrow the Roman Republic in 64 BC. It came at a time when the Republic was in its death throes and could also be classified as Cicero’s finest hour as the great orator luxuriated in his title â€˜Savior of Rome.’

Catiline was an unscrupulous career politician known for having an unstable character, yet he also possessed a magnetic charm which helped him climb the political ladder. It also lured women to his side, although sources suggest he murdered his first wife and child (as well as his brother-in-law in 81 BC).

His attempts to succeed in the consular elections failed several times and eventually, Catiline decided to seize power by illegal means. There are suggestions that he was involved in a plot to kill Senators in 65 BC (in what is known as the First Catilinian Conspiracy) but historians can’t find evidence linking him to the plan.

On the surface, he was an ideal candidate for the consulship because of his military background. At one time he even had the support of Julius Caesar. However, he courted controversy wherever he went. While working as governor in Africa, Catiline was charged with extortion, and while he was acquitted, the trial damaged his reputation. Rumors surrounding the mysterious death of his wife and son also burdened him.

Nonetheless, Catiline won the support of the wealthy and influential Crassus as he ran for consul in 64 BC. Again, he suffered defeat as Cicero, and Gaius Antonius Hybrida were victorious. After this setback, Crassus and Caesar withdrew their support for Catiline because he revealed a desire to embark on a revolutionary program that was contrary to Crassus’ belief system.

However, there were plenty of supporters for Catiline’s radical ideas as desperation amongst certain elements of society was rife. The public was tired of corruption, and when it came to Italian farming, the situation was desperate since the land was destroyed due to industrialization and war. Catiline promoted his debt relief policy and gained support among the poor and from many of Sulla’s veterans.

An Atmosphere of Fear

Cicero took his office as consul along with Hybrida on January 1, 63 BC. He heard rumors of a conspiracy which would involve the murder of several government officials (including Cicero) and the burning of Rome. This information came from a woman called Fulvia who was a mistress of Quintus Curius, one of Catiline’s friends.

According to her story, Curius was heavily in debt and to prevent his mistress from leaving him; he claimed he would be coming into money and then revealed details of the plan. Fulvia told Cicero’s wife who informed her husband. However, very few people believed the consul because there was little evidence of a plot barring rumor. Instead of listening to the Senate, Cicero became convinced there was a conspiracy and soon enough, the great orator found the evidence he needed.

The Conspiracy is Uncovered

On October 18-19, letters addressed to Roman senators were delivered to Crassus; his letter warned him to flee the city. Crassus visited Cicero, and while the sender is still unknown, many historians believe it was a friend of Catiline and Cicero named Caelius. Cicero addressed the Senate on October 20 and handed the letters to the people they were addressed to. Each one told the recipient to leave Rome and contained details of the plot.

In the meantime, Catiline was trying to assemble an army, and a minor slave revolt began in Capua. Now that civil unrest had started in the Roman countryside, Catiline decided the time was ripe to bring his conspiracy to Rome. He planned to murder several senators and burn important buildings to the ground. On November 7, 63 BC, two of his men tried to assassinate Cicero, but the orator had taken the step of placing bodyguards by the entrance of his home and these men scared the would-be killers away.

The following day, Cicero held a meeting with the Senate and ensured that the Temple of Jupiter Stator was surrounded by armed guards. He was probably astonished to find Catiline in attendance. The conspirator strenuously denied any wrongdoing and verbally attacked Cicero. He complained that he was getting sent into exile without a proper trial and even gave himself up for house arrest. However, he showed his true colors later that day by calling for further uprisings in the countryside, and fleeing the city with 300 men.

The conspirators were desperate for further assistance and believed they found it in the form of the Allobroges, a Gallic tribe. The Gauls met members of the Senate and appealed for a reduction in taxes. As they left the meeting, the Allobroges ran into some conspirators who asked for their help. Once they were outside the city, the tribe met Caius Pomptinus and were told to return to Rome. They told the Senate all about the plot including places, plans, and names.

The Allobroges asked the conspirators to send them letters to prove the plot had a real chance of succeeding. These letters were written by five conspirators but were intercepted en route to the Gauls. Cicero finally had his proof, and he read the letters to the Senate. The five letter writers were arrested and brought into custody. Cicero demanded that the men be executed without trial; a suggestion opposed by Caesar. The Senate were about to listen to Caesar’s appeals for clemency when his rival, Cato the Younger, spoke out against leniency and demanded the death penalty.

The five men were strangled by an executioner in an ancient building in the Forum called the Tullianum. Cicero gained initial praise as â€˜father of the fatherland, ‘ but eventually the public began to question his excessive use of executive powers. When news reached Catiline’s army, three-quarters of the men deserted. Eventually, he fought an army commanded by Antonius Hybrida at Pistoia and died in the battle in 62 BC.

While the poor continued to view Catiline as someone to be respected, the Senate, Cicero, and aristocrats all viewed him as nothing more than a power grabber. In recent times, he is viewed more as an agrarian reformer than a bloodthirsty traitor, but as always, one man’s revolutionary is another man’s terrorist.