Sources Claim Gandhi Used to Frequently Sleep Naked In a Bed With Young Girls... Including His Grandniece 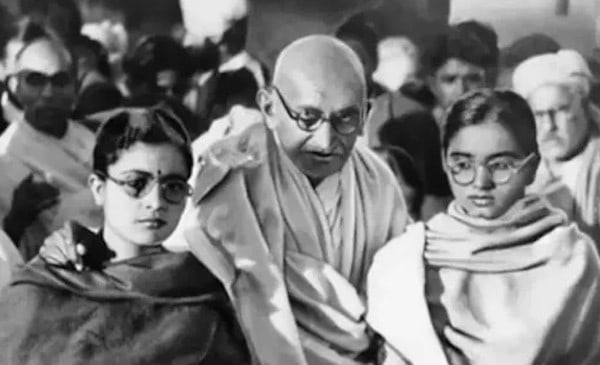 Mohandas Gandhi is usually remembered as one of history’s greatest leaders. His quotes, and often quotes attributed to him that he never actually said, are often brought up as a source of deep wisdom about peace and love. And in many ways, this image of Gandhi is close to the mark. He did lead one of the most successful non-violent resistance movements of all time, and people did recognize that he seemed to possess a lot of spiritual wisdom. But like so many historical figures, Gandhi had a few dark skeletons in his closet.

Gandhi was often referred to by the title “Mahatma,” meaning “great soul.” The title was a recognition of his dedication to spiritual learning and advancement. To that end, Gandhi tried to live a life of spiritual purity. He was a life-long vegetarian, and later in his life, took a vow of strict chastity. That desire to refrain from having sex may have been rooted in the fact that Gandhi himself seems to have had a fairly healthy libido from a young age. At just 13 years old, Gandhi was married to a girl who was a year older, which wasn’t uncommon in India at the time.

Gandhi was skeptical of the marriage at first and worried that both he and his wife were too young. But he quickly took a liking to the physical aspect of marriage. He frequently complained that he and his young wife were having so much sex that he had little time to do anything else. And Gandhi’s libido does seem to have had a serious effect on his scheduling priorities. For instance, even when his father lay dying, Gandhi left his side to have sex with his wife. Gandhi was so busy doing that, that he missed his father’s passing.

Gandhi seems to have felt a lot of guilt at not being present when his father died because he was overcome with physical desire. But it wasn’t until he was in his 30’s that he took a personal vow of chastity and poverty. And he was very vocal about the benefits of the lifestyle. He frequently encouraged young couples who were getting married to abstain from sex. But his natural interest in sex didn’t go away just because he wasn’t having any. In fact, many have described Gandhi as being “obsessed” with sex.

Gandhi preached the importance of celibacy, often in graphic detail, to just about anyone who would listen. He even went so far as to say that it was the duty of every Indian not to marry. And if they did marry, they should abstain from sex with their spouse for the benefit of their souls. As Jawaharlal Nehru, the first Prime Minister of India, described these ideas, they struck many as “abnormal and unnatural.” But Gandhi was absolutely dedicated to the idea of chastity. He even began conducting strange sexual experiments to discover the best way to stay chaste. Or at least, that’s how Gandhi explained them to others.

After taking his vows of poverty and chastity, Gandhi began setting up ashrams (essentially Hindu monasteries) to teach his ideas to others. But they were also intended to be places where Gandhi could experiment with the best way to stay chaste. These ashrams took in young boys and girls and began training them to live their lives without sex. Children and adults of both genders were expected to live, sleep, and even bathe together. But any sort of sexual talk or behavior was punished. And of course, Gandhi also subjected himself to these experiments in chastity.

Gandhi frequently slept and bathed with his young female followers. When others criticized this practice as being unseemly, Gandhi argued that it was a way for him to increase his spiritual power. And as Gandhi said of his practice of bathing with Sushila Nayar, the younger sister of his secretary, “While she is bathing I keep my eyes tightly shut. I do not know … whether she bathes naked or with her underwear on.” Obviously, it wasn’t an explanation that satisfied his critics. But the opportunity to bathe or sleep with Gandhi was seen as a great honor among his followers.

It was a sign that “Father,” as they called him, had taken a special interest in their spiritual development. But Gandhi seems to have taken a special interest in his female followers based on how young and attractive they were. When Sushila grew older, she found herself being replaced in Gandhi’s bed by his 18-year-old grandniece, Manu. According to Gandhi’s writings, these unorthodox experiments sometimes went further than just sleeping. Gandhi sometimes asked the women he slept with to perform strip-teases or make sexually explicit conversations. As Gandhi explained it, this was the ultimate test of his vow of chastity.

As to whether or not Gandhi might have ever given in to his urges, it’s hard to say. Some of Manu’s diaries describing her nights with Gandhi record some episodes that seem to be less than completely chaste. For instance, one entry describes how “when Bapu [Gandhi], Sushila, and I were sleeping on the same cot, he embraced me and patted me.” And some of Gandhi’s own writings include references to “accidents” that happened when he was sleeping with one of his followers. If the goal of the experiment was to stay chaste, then an “accident” might logically mean giving in to temptation.

It’s also worth mentioning that Gandhi probably slept naked through most of these experiments and expected the girls he was sleeping with to do the same. As Gandhi told Manu when she first came to his bed, “[we] must put our purity to the ultimate test, so that we know that we are offering the purest of sacrifices, and we should now both start sleeping naked.” Gandhi somehow connected the idea of spiritual purity with a young girl sleeping naked with her granduncle. Today, most people are fairly skeptical of this idea. And even at the time, people accused Gandhi of using spirituality to justify exploiting his followers sexually.

In 1947, Gandhi received a letter from a young man who had decided to leave his ashram. “I object to your practice of sleeping in the same bed with members of the opposite sex,” the man wrote. “Apart from the question of any effect on you, what about the effect on the girls?” It was a good question, and the letter also talks about the effects it did seem to have on the girls. “[The] Punjabi girl who lived opposite my room… She used to weep unrestrainedly. And then there’s Sushila-ben… how many are the days when she has not wept?”

From a modern point of view, it seems less like Gandhi was conducting spiritual experiments and more like he was exploiting young women who looked up to him to satisfy his sexual desires. Sushila Nayar, who was one of the earliest followers to share Gandhi’s bed, reported that this was probably the case. As she said following Gandhi’s death it was only, “Later on, when people started asking questions about the physical contact with women…the idea of experiments was developed… in the early days, there was no question of calling it an experiment.”

There’s little question that Gandhi kept up these “experiments” in the face of objections from many people around him. But even when people told him how much he was hurting his image as a leader of India, and hurting the women around him, he couldn’t seem to stop. In fact, the objections seem to have had the opposite effect on him. In a way, that makes sense. He was telling the world that these were spiritual experiments. If he stopped, he was admitting that his motivation was less pure. As Gandhi said, “If I don’t let Manu sleep with me, though I regard it as essential that she should, wouldn’t that be a sign of weakness in me?”

Even at the time, if they had been public information, they would have seriously damaged his image as “Father of the Nation.” Gandhi and the people around him seem to have understood that. That explains why, following Gandhi’s death in 1948, some of Gandhi’s family members made a serious effort to keep the experiments out of the public eye. Manu reported that Gandhi’s son Devdas approached her after Gandhi’s death and told her she should keep the diary she kept of the time she spent with Gandhi to herself.

The effort to cover up Gandhi’s activity makes it clear that even those closest to him understood that what he was doing was fundamentally wrong. Or at least, they show that they understood that most people would have felt that way. But the cover-up was certainly effective. Even today, few people are aware of Gandhi’s strange experiments or the toll it took on the women around him. But the evidence we have available now paints a more complicated picture of Gandhi than simply a living saint. And it makes it clear that Gandhi’s public vow of chastity always had a secret, darker side.

The Independent: An odd kind of piety: The truth about Gandhi’s sex life

Times Of India – The Mahatma in The Bedroom

Open The Magazine – ‘On His Sexual Experiments, Gandhi Refused to Be Swayed by Disapproving Associates’

She the People – Experiments with Celibacy, Comments on Rape: Gandhi’s Controversies

The India Forum – Life with The Mahatma

Medium – Some Hard Truths About MK Gandhi: Not So Mahatma (Great), After All!

The Times of India: Gandhi was obsessed with sex – while preaching celibacy to others: Kusoom Vadgama