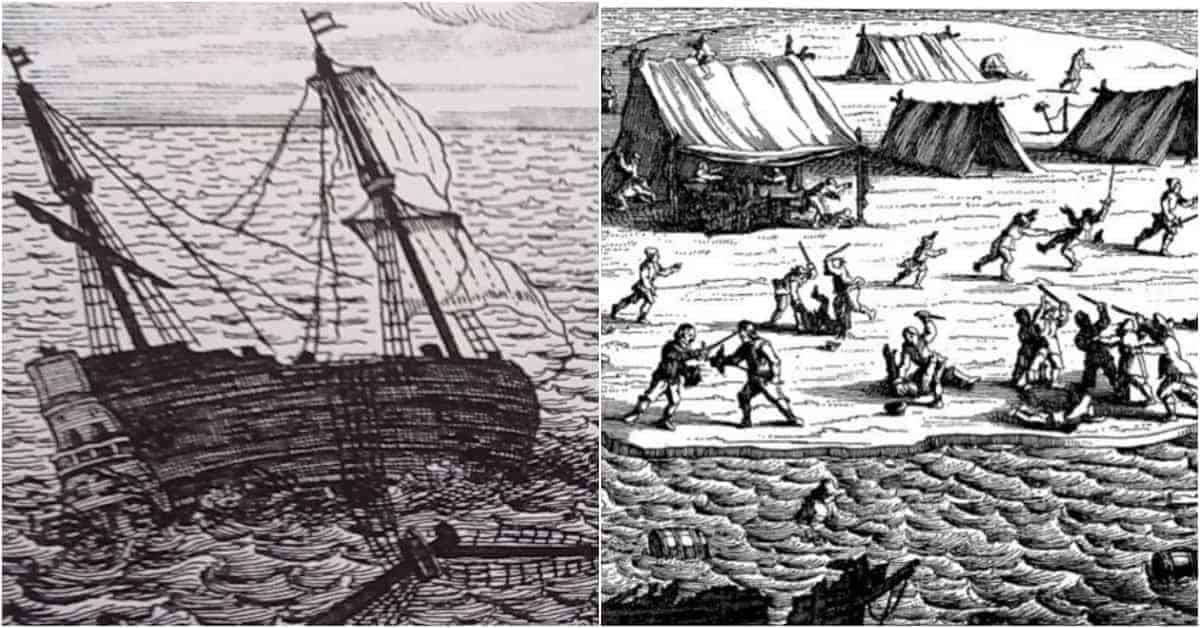 During the 17th century, the average European viewed the tropics as a dark and mysterious place. They were the sort of places that many feared to visit. Many tropical colonies were even referred to as the “white man’s grave” due to the high mortality among European colonizers in these places from tropical diseases like malaria.

The threat of an early grave loomed large for those who were sent to manage these far-flung outposts of empire. And surely, it must have weighed heavily on the minds of those aboard the Batavia.

Setting sail on her maiden voyage from the Netherlands to the Dutch East Indies in 1628, the ship was tasked by the East India Company to carry a load of much-needed silver to sustain the company’s operations in the colony.

The people on board were a motley collection of hard-bitten sailors, soldiers, and colonists, all under the command of senior merchant Francisco Pelsaert. The passengers and crew must have felt some fear at the idea of a long voyage to such an unforgiving environment.

What they didn’t realize is that what they should have feared most was not a disease; it was each other.

In fact, the man they should have feared most was Jeronimus Cornelisz. Cornelisz was a bankrupt pharmacist fleeing the city of Haarlem. He was hounded by accusations of associating with a heretical Dutch painter popularly known as “Torrentius.” Torrentius’s libertine lifestyle and unorthodox religious beliefs led to a trial and the persecution of his followers. We don’t know for certain that Cornelisz bought into the painter’s ideas, but we do know that he decided to flee the city within a few weeks of the trial and secured a position as under-merchant on the Batavia.

Once onboard, Cornelisz quickly struck up a friendship with the ship’s skipper, Ariaen Jacobsz. The pair bonded over their shared distaste for their commander, Francisco Pelsaert. Cornelisz and Jacobsz were both convinced that Pelsaert was a tyrant who dealt out unfair punishments on the crew. And together, they hatched a plot to remove him from command. The plan they came up with was to organize a mutiny, take command of the ship, and use the ship’s hoard of silver to start a new life somewhere far from the reach of the Dutch Navy.

Cornelisz’s plan to turn the crew against Pelsaert centered on another passenger, Lucretia Jans. Jans was one of the few young, attractive women on board and most of the crew instantly desired her, including Cornelisz. Cornelisz decided to have a group of men assault Lucretia while wearing masks, which meant that Pelsaert wouldn’t know who to punish for the attack. That would require him to discipline the crew at random, driving the men to mutiny. And so, one dark night at sea, a group of masked men prowled the decks of the Batavia, searching for their prey.

Lucretia survived her assault, but the attack didn’t turn out the way Cornelisz expected. Lucretia was able to identify several of her attackers and Pelsaert, who was suffering from a serious illness, never punished anyone. It’s likely that at least a few of the conspirators would have been arrested, but fate intervened. In June, the Batavia was sailing off the coast of Australia through a chain of islands called the Houtman Abrolhos. The area was largely unexplored and the dangerous coral reefs were unmapped, making navigation treacherous. On June 4, the ship struck one of these reefs and began to break up.

The survivors of the crash hurried to the lifeboats, which ferried them to nearby Beacon Island along with all of the ship’s remaining freshwater. The officers quickly realized how bleak their position was. Beacon was over two thousand kilometers from the nearest Dutch settlement. More importantly, the island was completely barren, with little to eat and no freshwater. Pelsaert knew that without help, they had little chance of surviving. The only hope was to sail one of the small, open lifeboats to the East Indies and return with help.

The plan was desperate, but with no alternative, Pelsaert and a few of the ship’s officers set off- including Jacobsz- leaving Cornelisz as the senior officer among the survivors on their island. Cornelisz, with his natural charisma and his senior rank, quickly convinced the rest of the survivors to make him their leader. He then gathered a group of men willing to follow his commands and set them to removing anyone he thought was a threat to his rule. To Cornelisz, that meant anyone whom he thought was unlikely to obey him or even just people he thought of as “useless mouths.”

He began by sending a group of these people to another island- now called Seal Island- with the false promise that they would find a source of freshwater there. Once they landed, one of Cornelisz’s men in the boat sailed away, leaving them to die. Cornelisz then gathered a group of soldiers and confiscated their weapons before sending them off to the distant West Wallabi Islands. Over the next few days, he sent the other people he wished to dispose of out in boats with some of his men. Once out of sight of the other survivors, they were then pushed into the water and left to drown.

With control over every weapon on the island and the remaining food and water, Cornelisz had the literal power of life and death over those left. His plan was to reduce the population to around 45 people, allowing him to survive long enough to hijack a passing ship. At his command, the mutineers began to systematically murder the other survivors. With no one to stop them, they were free to indulge their worst impulses. Many of the remaining women were subjected to horrible sexual abuse and Cornelisz seized Lucretia Jans for himself. But if Cornelisz thought that he had removed every threat to his rule, he was wrong.