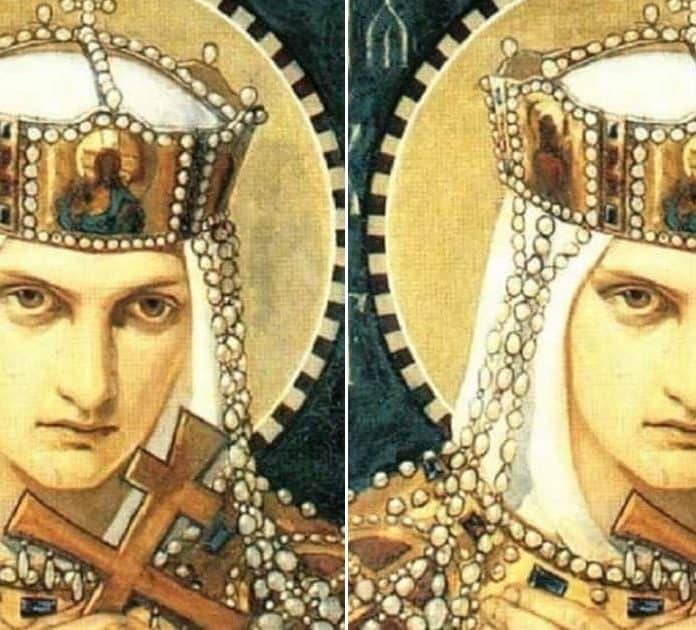 Olga of Kiev lived a life of extremes. The descendant of Viking mercenaries and traders, she married Igor, the Rus Prince of Kiev. When client tribe slew her husband, Olga’s Viking blood shone through. Not only did she exact elaborate, ruthless and bloody revenge against Igor’s killers but she showed her countrymen that a woman could rule with strength and decision.

Princess Olga remained the regent of Kiev during her son’s minority, consolidating the city-state’s power and ensuring the stability of her dynasty for generations to come. Somehow, this determined woman, whose decisions caused thousands of people to lose their lives, became an icon of the Russian Orthodox Church who canonized her in 1547. So how exactly did Olga of Kiev make the journey from ruthless pagan warrior and ruler to “Isapostolos”- the “Equal to the Apostles.”?

The Descendants of the Vikings

Princess Olga of Kiev was born in Pskov, a city in northwestern Russia, close to the Estonian border. Pskov was a trade nexus between Russia and Scandinavia. Many Scandinavians settled there and grew wealthy from the passage of goods between east and west. Their graves remain, along with the evidence of the high status they acquired in Pskov’s society. These people were known to the indigenous peoples as Varyags or Varangians. The primary textual evidence for Olga’s life, The Russian Primary Chronicle’ refers to the Princess herself as of Varyag origin- meaning Olga of Kiev was a descendant of Vikings.

According to the Chronicle, in 912 Olga married, Igor, the heir to the throne of Kiev. Igor was also a Viking descendant. His father, Rurik was a Varangian chieftain who moved east and made his seat of power at Novgorod on the Volkhov River. On his death in 879, Rurik bequeathed his land to his kinsman, Oleg to hold in trust for Igor who was too young to rule. On Rurik’s death, Oleg and Igor moved the capital of the Rus to Kiev, founding the kingdom of the Kievan Rus.

Igor ascended the throne in 913, according to the Chronicle. He was immediately forced to subdue a rebellion of the Drevlyans’s, one of Kiev’s eastern Slavic clients who now refused to pay tribute. Igor successfully overcame them. Peace reigned until, in 945, the Chronicle records the Drevlyans reneged again. This dating of the Chronicle is controversial, because it leaves an unconvincing thirty-year gap in activity in Igor’s reign, especially as it states his son by Olga was only three in 945. It seems likely the Chronicle was confused by the original Byzantine sources, and that only three years had passed, (also meaning Igor came to power in 941). Either way, Igor set out from Kiev to deal with the Drevlyans’s leaving his wife and son, behind.

Once more, Igor subdued the Drevlyans and as punishment extracted a higher tribute. However, once he was part of the way home, he decided to go back for more. Sending his main army home with the tribute, Igor backtracked with a smaller force. The Drevlyans, fearful and perplexed by Igor’s return, sent emissaries to find out what he wanted. When Igor refused to say, the panicked Drevlyans snapped. They overcame Kiev’s forces and captured Igor. The Drevlyans took the Prince to a place just outside the city of Iskorosten where they tied two birch trees to his legs. “Then they [the Drevlyans] let the trees straighten, “ said the Byzantine chronicler Leo the Deacon, “thus tearing the Prince’s body apart.”

The Drevlyans had gone from being the defeated underdogs to unexpected victors due to Igor’s miscalculation. Meanwhile, Kiev was in the hands of a woman and a three-year-old boy. The Drevlyans decided to capitalize on the situation, so they sent a delegation to prey on Igor’s ‘vulnerable’ widow.