A Veteran of Two World Wars: 7 Fascinating Facts about the USS Texas 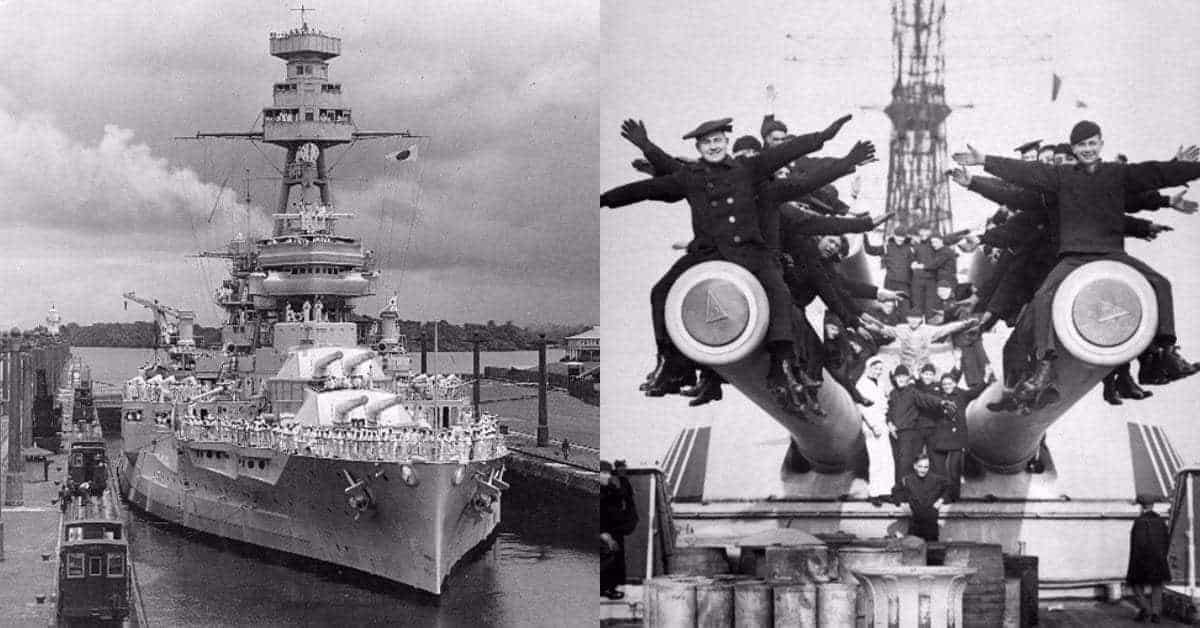 A Veteran of Two World Wars: 7 Fascinating Facts about the USS Texas

“No Better Friend, No Worse Enemy”

In addition to boasting a compliment of approximately 1,000 Naval officers and enlisted sailors, the USS Texas was the first warship to feature a permanent contingent of U.S. Marines. The 1st Marine Division, which is still one of the most exalted units in the U.S. Marine Corps, was activated aboard the Texas on February 1, 1941. Marines routinely raided beaches since the Revolutionary War, but were never permanently assigned to a U.S. Naval warship until the outset of WWII. The leathernecks of the 1st MARDIV, much like their shipmates aboard the USS Texas, were no strangers to war.

The forerunner to the 1st Marine Division was the 1st Advanced Brigade, activated during the winter of 1913. This organizational ancestor of the 1st MARDIV underwent many restructurings and redesignations over the years, seeing action in Mexico, Haiti, the Dominican Republic, Cuba, and France. This “Old Breed” of Marines fought over a dozen battles in WWI, including bloody engagements at Belleau Wood, Chateau-Thierry, and St. Mihiel. The unit was deactivated and recommissioned twice prior to WWII. Marines assigned to the unit alternated between infantry and artillery assignments just years prior to the activation of the 1st MARDIV aboard the USS Texas.

During the Second World War, Marines of the Division saw sporadic action across the Pacific. The Guadalcanal Campaign was the first engagement where the 1st Marine Division fought as a single, unified unit. Codenamed Operation Watchtower, Guadalcanal was America’s initial counteroffensive against Imperial Japan. Although a costly engagement, the Battle of Guadalcanal is widely regarded as a major turning point in the Pacific War.

The Texas later supported the 1st MARDIV during the bloody Battle of Okinawa, by first bombarding Japanese emplacements and later delivering on-call fire support for Marines fighting ashore. Combined, the Texas and the “Blue Diamond” delivered a knock-out one-two punch to the Empire of Japan.

With the advent of combat aviation during the First World War, the various nations of the world saw a pressing and obvious need to counter the emerging threat of enemy aircraft. Although rudimentary compared to modern jets and strike fighters, WWI-era airships and airplanes gathered crucial intelligence and attacked targets on the land and sea with relative impunity. Some of the earliest methods employed to counter these aerial threats simply involved turning existing ground weapons towards the sky. Attempting to shoot down a biplane with a bolt-action rifle was crude at best, however, which led to the development of specialized weapons systems.

Beginning in the early twentieth-century, weapon designers and military officials started developing and testing a variety of antiaircraft (AA) systems. Some of the more popular anti-airship and AA guns of the period were the brainchildren of veteran companies, like Krupp and Vickers. Experimentation with calibers, fuses, and various types of ammunition led to the development of flak guns, cannons, and dedicated AA machine guns.

By 1915, approximately a dozen countries employed AA weaponry, with most of these platforms appearing on war-torn battlefields across the Western Front. Naval officials also recognized the threat of enemy aircraft at sea and began employing AA weapons aboard ships during the same period.

In 1916, the USS Texas was the first American warship outfitted with antiaircraft weapons, consisting of two 3-inch .50 caliber low-angle guns. Capable of delivering 76 mm shells, at a sustained rate of 15-20 rounds per minute, the 3″/50 caliber guns could reach targets at elevations up to 30,000 feet. The 3″/50 caliber AA gun made its land-based debut in 1890, underwent numerous design changes, and remained in lengthy service with the United States Navy until the closing shots of First Gulf War. The Texas’s AA battery grew significantly over the years, with the addition of six 3″/50 caliber guns, ten quad-mount 1.6″ Bofors, and forty-four 20 mm Oerlikon cannons.

Aeronautics literally advanced by leaps and bounds during the early twentieth-century, with many warships playing critical roles in the development of naval aviation. Most of today’s naval planes and helicopters are launched from the decks of sophisticated aircraft carriers. During the early 1900s, however, aviation was generally a nascent technology, with fragile planes barely capable of executing land-based takeoffs and landings. Nevertheless, rapid technological advancements, coupled with bold naval experiments, culminated in the introduction of seaborne aircraft. Initial attempts involved pilots departing from coastal airfields and landing on vessels at sea. Later pioneers eventually launched their planes from modified platforms aboard a variety of ships.

Some of the earliest naval aviation developments came out of Europe, where innovative pilots and policy-makers pursued the idea of aerial sea-power. Ships of the period possessed the appropriate displacement and propulsion necessary to launch and capture aircraft at sea, while airplanes became lighter and more powerful with each successive design. Capitalizing upon these developments were nations like France and Great Britain, that instituted some of the world’s first organizations and schools dedicated to naval aviation. Royal Navy Lieutenant Charles Samson was the first pilot to launch an aircraft from an underway vessel, aboard the HMS Hibernia, in January 1912.

During the winter of 1910, American pilot Eugene Ely took-off from an anchored vessel off the coast of Virginia. On a subsequent flight, Ely later landed on a cruiser anchored in San Francisco Bay. Over the course of a decade, the U.S. Navy established the Bureau of Navigation, purchased several specialized aircraft, and trained pilots to become dedicated naval aviators. On March 10, 1919, Medal of Honor recipient, Edward Orrick McDonnell, launched his Sopwith Camel off a converted gun turret aboard the USS Texas. McDonnell was thus the first pilot to take-off from an American battleship, with the Texas taking center stage during this incredible moment in naval aviation history.

On the Cutting Edge

Two prominent features of the USS Texas are her assortment of bristling, large-caliber gun turrets and the incredibly thick belt of armor protecting her hull. Designed in an era where ships were met to dish out punishment as well as take it, the “Mighty T” was more than capable of representing America’s interests abroad. As time progressed, however, so did the methods and means to wage war. The Texas was at the forefront of these technological innovations, including the use of sophisticated new devices, such as complex fire-control systems and an early form of modern radar.

Modern fire-control systems incorporate many features, including computers, directors, and radar, to improve the accuracy of weapon systems and the overall chances of striking hostile targets. In naval gunnery, fire-control systems typically work in tandem with AA weapons, large-bore cannons, torpedoes, or guided missiles. During the 1920s, when the Texas received the first of several upgrades, fire-control systems were slightly less sophisticated, relying on complex analog devices instead of computers and digitally-enhanced systems. Nevertheless, the USS Texas was the first battleship to incorporate some of the initial fire controls available to the U.S. Navy, which allowed her crew to deliver accurate and powerful fire over unprecedented distances.

Enhancing the Texas’s tactical capabilities was the introduction of an early form of radar, known as CXAM (an acronym denoting the merging of two earlier, prototype radar technologies). This forerunner to modern naval threat-detection systems was tested extensively just prior to America’s official entrance into WWII. The USS Texas was one of fourteen vessels to receive a production version of this system, the CXAM-1. Outfitted on the ship in 1941, this improved model could detect enemy threats at ranges up to 100 miles. The CXAM-1 gave the USS Texas a decisive advantage at sea, while facing Japanese forces that lacked any comparable technology.

The USS Texas proved a force to be reckoned with during WWII, capitalizing upon her upgraded fire-control system, radar, and recent breakthroughs in naval aviation. During Operation Torch, the Texas utilized its CXAM-1 radar and OS2U Kingfisher spotter planes to perform valuable reconnaissance while off the coast of Northern Africa. Later, during the Battle of Normandy, the Texas participated in the pre-landing bombardment of Omaha Beach, later providing direct and indirect on-call fire support for troops that made it ashore. The “Mighty T” additionally pounded Iwo Jima and Okinawa, raining thousands of shells down upon Imperial Japanese forces, while defending her battlegroup against desperate kamikaze attacks.

During mid-May of 1945, the Texas arrived in the Philippines where she resupplied and awaited further orders. The Empire of Japan capitulated to the United States on August 15, whereupon the USS Texas returned to Okinawa. From there, she led the charge in Operation Magic Carpet, a massive endeavor to return over eight million deployed troops back to the United States. After several trips across the Pacific, the Texas departed San Pedro, California for Virginia. She arrived in Norfolk on February 13, 1946, prepared for deactivation, and was officially retired from active service on June 18, 1946.

Over the course of her long and distinguished career the Texas took part in dozens of battles. She was awarded five battle stars for meritorious and gallant service. On April 17, 1947, exactly 36 years after workers initially laid down the Texas’s keel in Newport News, Virginia, the Texas State Legislature established the Battleship Texas Commission. This group funded and oversaw the USS Texas’s journey from Baltimore, Maryland to the San Jacinto Battleground State Historic Site, where she sits today.

On April 21, 1948, the USS Texas was decommissioned, becoming the first permanent U.S. battleship memorial museum in the country. April 21 bears significant historical value for Texans, as it marks the 1836 Battle of San Jacinto, which ended the Texas War of Independence, establishing the Republic of Texas. Almost thirty years after being decommissioned, the USS Texas also became the first U.S. battleship to be designated a National Historic Mechanical Engineering Landmark, by the American Society of Mechanical Engineers (1975), and a National Historic Landmark, by the National Park Service (1976).

SOS (Save Our Ship)!

Sadly, the USS Texas continues to fight even in retirement. Constructed of iron, wood, and steel, the hundred-year-old ship constantly struggles against the march of time. During the early 1970s, newspapers reported that the Texas was literally rusting away underneath the feet of visiting patrons. A massive 1988-90 drydock project help to reconstitute and preserve the USS Texas, but the “Mighty T” again finds herself in troubled waters. Rampant leaks and crippling rust continue to threaten the integrity of the ship. The Battleship Texas Foundation estimates that approximately 300 tons of water are pumped off the Texas every single day.

Experts recently concluded that the only lasting solution to the problem is the permanent dry-berthing of the Texas, which would eliminate the threats of leaks and prevent any potential environmental damage to the surrounding ecosystem. Unfortunately, such an undertaking is projected to cost over $50 million, significantly more than what would be required to scrap the ship. Those interested in preserving the tremendous legacy of the USS Texas may get involved by contacting the following offices and organizations: