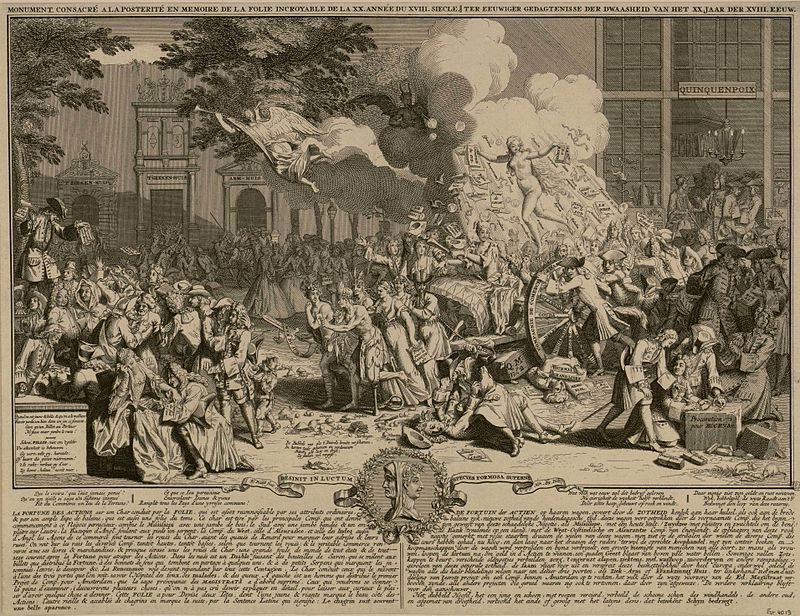 This might sound like some sort of weird passive-aggressive attempt by the French to pull one over on the Americans, but this actually happened back when Louisiana (which was much bigger and included areas that are now part of Mississippi) belonged to the French.

In 1716, France was in trouble. The treasury had been exhausted by the long reign of Louis XIV whose wars had all but bankrupted the country. France needed a path forward and reducing spending was not something Louis XIV was willing to consider. So he turned to economist John Law. John Law proposed a new idea in which the national debt was transferred to the Banque Royale in exchange for substantial privileges. John Law’s plan was to repay the debt using profits from his Mississippi Company which hoped to get substantial revenues from the opening up of the Mississippi Valley. His company was granted a monopoly on trade and mineral wealth. On paper the company looked like a guaranteed success, the truth was not quite so easy.

There was a problem, at the time there were only 700 Europeans in Louisiana at the time. If Law was going to get anything out of the territory, he needed more people there to extract the wealth. He started a substantial marketing campaign going as far as to call Louisiana the “Garden of Eden” and that it was a perfect place to live. Despite his efforts, few people volunteered to move to the isolated and sparsely populated colony.

That left John Law with a problem, his large and expensive marketing campaign for Louisiana and by 1718 had only gotten another 800 settlers which was not enough to entice a larger immigration. What he needed was more people in Louisiana in order to give the appearance that the colony was not only prosperous but thriving and somewhere that people wanted to go. He even tried to get the Germans and Swiss to emigrate to Louisiana but they were just as reluctant as the French. So he promised that 6,000 whites and 3,000 Negros were on their way to the new colony.

He was stuck in a bad position where he needed bodies but no one was willing. So he decided to find the people who had no other options and would jump at the chance to live anywhere else than where they were currently living. He preyed upon the lowest of society in order to populate his new colony and get the money he needed to not only pay off the national debt but become wealthy himself.
So he came up with a crazy idea to populate the colony and it did not go over too well with the people that already lived there.

In 1719, John Law decided to offer prisoners in Paris something they could not refuse. He offered them their freedom as long as they were willing to marry a prostitute and head off to Louisiana. Anyone who agreed to the bargain was shackled together until they boarded a ship to sail to the Gulf Coast. John Law went as far as to raid hospitals for drunks and disorderly soldiers, find prostitutes and the black sheep of society, paupers and just about anyone who wouldn’t put up a fuss, and they were then forcibly taken to the docks to be shipped off to the colony. Those who came willingly were offered land and provisions.

Most of the people who arrived in Louisiana were hungry, had little provisions, and had no shelter. The area where they landed quickly became crowded and there was no one waiting to provide them with jobs, food or a home. To that end, many of the arrivals became ill and even died before they ever got to experience the garden of Eden or do anything to build upon the wealth of John Law’s investment.
The new immigrants and the old ones were settling in the town of Biloxi (which would later be part of Mississippi but it was part of what was called Louisiana at the time and it was the part that John Law could profit from). But with the influx of criminals and other less than ideal immigrants, many of the well-to-do immigrants who had come in an attempt to shape the new colony found themselves unwilling to stick around. They started moving East to New Orleans to get away from the starving criminals that were invading their little town.

By 1720 New Orleans was growing and John Law’s Mississippi Company was losing citizens and its workforce. The colonists protested against the new immigrants and France responded by making the deportations illegal. Despite this, a third and final ship filled with prisoners arrived in 1721. The damage had already been done however and even soldiers began to move East, leaving the Mississippi coast inhabited only by the people John Law had forced to immigrate. They struggled to make a life for themselves but by 1767 most of them had been forced to flee the islands due to lack of protection from the native Indians.

While John Law’s bargain to French prisoners might have seemed like a good deal at the time, it is unclear whether or not the prisoners would have preferred to just stay in prison after their ordeal on the Mississippi coast. As far as John Law went he tried desperately to prove that his Louisiana territory was profitable. The bank forged paperwork and printed off paper notes to investors. However, it was eventually discovered that the paper notes being printed and handed to investors exceeded the amount of metal coinage that was held by the bank. Investors rushed to cash in their paper notes in 1720 but the bank was forced to stop payment on paper notes when it became clear they did not have the funds to pay off everyone.

John Law was relieved of his position and forced to flee to Brussels. He later moved to Venice and made a living off of gambling until his death.

History Collection – The French Hand Over Orleans to American