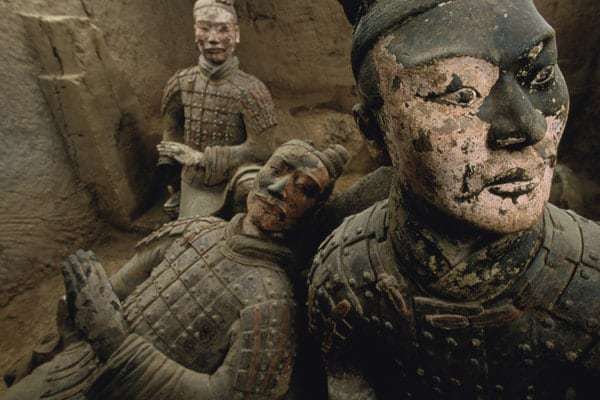 The need to safely dispose of the dead is something every human society in history has in common. Whether it be cremation or burial, grand tomb or anonymous pit, everyone is seen off into the great unknown one way or another.

The ways people were laid to rest – whether deliberately or by accident – can offer fascinating insights into the lifestyles and beliefs of societies and individuals. They can also offer up mysteries and conundrums. Here are 5 of the most intriguing.

The Tomb of Qin Shi Huang

Qin Shi Huang was the first Emperor of China. Although he only lived for 49 years, he made every second count. Besides conquering and uniting the six rival states to form the Chinese nation, he founded the Imperial Qin dynasty and built the Great Wall. Even before his 11-year reign as the emperor had begun, Huang had organized the building of his last resting place that was a city in miniature.

When he died September 10, 210 BC, Huang was laid to rest in a three story tomb at the center of a vast mortuary complex. This was discovered in 1974 when peasants accidentally uncovered the life-sized terracotta honor guard Huang took with him into the afterlife: the Terracotta Army. The rest of Huang’s ‘tomb’ still lies buried. But archaeologists using 3D volumetric scans have established that the complex spans 55.25 km or 22 square miles.

In all, 6,000 statues have been discovered. Besides the emperor’s army and their weapons, there are acrobats, chariots, horses, and an orchestra complete with instruments. Scans have established around 600 buildings around the complex, many of them tombs for court officials. At the center of it all lies Huang’s tomb, which in itself is a quarter of the size of The Forbidden City.

So why hasn’t this unique burial site been fully excavated? The cost and problem of conservation is one factor. But the other is the possible lethal consequence for any intrepid tomb raiders. For Huang took very tangible measures to ensure his last rest would be undisturbed. The Chinese historian Sima Qian recorded how Huang’s tomb was protected with lakes of mercury and booby-trapped crossbows. High levels of mercury have been found in the soil surrounding the tomb suggest that this is no mere myth.

Around 4,900 meters up the slope of volcanic Mount Llullaillaco in Argentina, far away from any settlement, is a lonely Inca cemetery. The mystery of its position has never been solved. It could be its occupants were attendants of an Inca shrine, which is situated 25 meters from the chilly summit of the mountain. The shrine itself contained a mystery that is still revealing itself. In 1999, an expedition to the mountain discovered the perfectly preserved bodies of three Inca children who died 500 years ago.

The children were a girl of around 15, and a younger boy and girl aged between 6-7 years. They were deliberately left in the shrine after death. Each was carefully positioned cross-legged with various textile objects positioned around them. The freezing temperatures, coupled with the lack of oxygen at such a high altitude and the antiseptic properties of the volcanic ash packed around the bodies had perfectly preserved their hair, skin, and clothes so that they appeared to be sleeping rather than dead.

The children are the best preserved natural mummies in the world. But their death was anything but natural. The boy had been suffocated and blood on his cloak suggests he may have resisted. Analysis of the girls suggests they died of the freezing temperatures while heavily sedated with cocaine. The eldest girl actually died still chewing the drug. Analysis of the bodies also suggests that the children experienced a sudden change of lifestyle two years before their deaths, sometime between 1430-1520 AD. High-status foods such as maize and llama meat were introduced to their diets as was increasing amounts of alcohol and coca.

The children were being groomed as sacrifices. The eldest girl was of particular importance, as she enjoyed the best lifestyle of all. But the events that prompted the purposeful preparation of these three human sacrifices remain unknown.

Dry, desiccating conditions resulted in an equally intriguing set of natural mummies in the Xinjiang province of northwest China. The Takla Makan desert, in the barren Tarim Basin, has perfectly preserved a number of bodies buried along the former route of the Great Silk Road that ran through the region. The dry heat and alkaline conditions have allowed the corpses and their grave good to survive the test of time -and so preserve a perplexing mystery.

Takla Makan’s mummies date from the Bronze Age to 2,000 years ago, a time when Tarim basin was lush and fertile, sustained by the waters of the Tarim River- until its course altered in the fourth century AD. Grave goods suggest the earliest mummies were part of the area’s agricultural communities. Mummies such as the Beauties of Loulan and Xiaohe who were buried with woven grain baskets and a winnowing trays. The mummies also wore clothes of textiles and styles that bear a startling resemblance to styles and weaves found in northern European and the Caucuses at the time. Some of the later mummies, such as Yinpang man even wore clothing similar to those of the Roman Empire.

Proximity to a trade route could explain some of these cultural anomalies. But there is a problem: the ethnic origin of the mummies. Most have red-brown or blond hair and European features. DNA analysis has confirmed their Caucasian origins, with genetic markers suggesting a convergence of groups from Siberia, and northern and Eastern Europe. The problem is, it was believed that the first European settlers in the Tarim Basin didn’t arrive until the twelfth century AD.

Victor Mair, Professor of Chinese language and literature at the University of Pennsylvania believes the mummies were Tocharians – Indo-European herders who traveled east across the central Asian steppes. But the mummies remain a source of controversy in China and beyond.

On a remote German hilltop, 25 miles from Berlin lies a graveyard that has proved equally challenging to archaeologists. Gross Fredenwalde’s Mesolithic cemetery is one of the oldest in Europe, with its earliest burial dating back 8,500 years-dating it to a time of transition when the hunter-gathering lifestyle was being challenged by early farming.

Mesolithic graves were usually isolated because of the nomadic lifestyle of hunter-gatherers. But Gross Fredenwalde shows a concentration of graves in one place, gradually established over time. It is Europe’s earliest mass cemetery.

The burials seem to reflect the changing times, showing a gradual inclusion of early farmers as well as hunter-gatherers. The oldest burial is that of a six-month-old baby. Traces of red ochre on the child’s bones and in the soil around the grave indicate that the corpse was decorated with the pigment as per Mesolithic burial custom. But analysis of the DNA of the remains and pottery types suggest that later burials belonged to both foragers and farmers who migrated to the area bringing new ideas to the region.

But the most intriguing burial is that of the only adult male found in the graveyard. Buried 7,500 years ago, archaeologists have established he was in his 20s and probably a flint knapper judging from the tools he was buried with and the lack of any wear and tear on his bones. What they cannot explain is the method of his burial, which was vertical rather than horizontal. Based on gnaw marks on the upper body, it is believed that initially he was buried to his knees, leaving his flesh exposed to predators and the elements-a possible example of excarnation, a common Mesolithic practice. Once this process was complete, the grave goods were added and the body fully covered by earth. But the reason for this unprecedented burial remains a mystery.

The actions of a nineteenth-century woodcarver at the ossuary at Sedlec in the Czech Republic are equally as perplexing. Sedlec is situated not far from Prague. In the Middle Ages, soil from the holy land was added to the cemetery, making it the place to be buried. The Black Death, followed by the Hussite wars in the fourteenth and fifteenth century ensured it enjoyed plenty of business – so much so it began to run out of space and needed to be enlarged. Matters were made worse by the construction of the Church of All saints in 1400 AD, which displaced a number of graves. With no space to rebury the disturbed dead, the church’s underground chapel was assigned as an ossuary-a storeroom for the orphaned bones.

Initially, the task of sorting the bones was assigned to an elderly, blind monk. Not surprisingly, he made little headway with his task as Sedlec’s ossuary has been calculated to contain between 40,000 and 70,000 skeletons. Little changed throughout the centuries- until 1867, when the local Schwarzenberg family appointed a local woodcarver, Frantisek Rint to sort out the bones.

Rint obliged -but not quite in the way expected. He began by bleaching the bones -and then used them to adorn the chapel. Most of the bones were arranged into four bell-shaped heaps, one for each corner. But the rest were used to provide furnishings and decorations for the chapel. A chandelier formed from at least one example of each bone of the human body, lights the vault, which is festooned with human skulls. Rint even fashioned the Schwarzenburg coat of arms in the chapel out of bones.

Rint’s work took three years and was completed in 1870. What inspired this strange interpretation of his task is not known. Indeed all that we do know of him is his name and occupation, signed on the right-hand wall of the chapel: in bones.