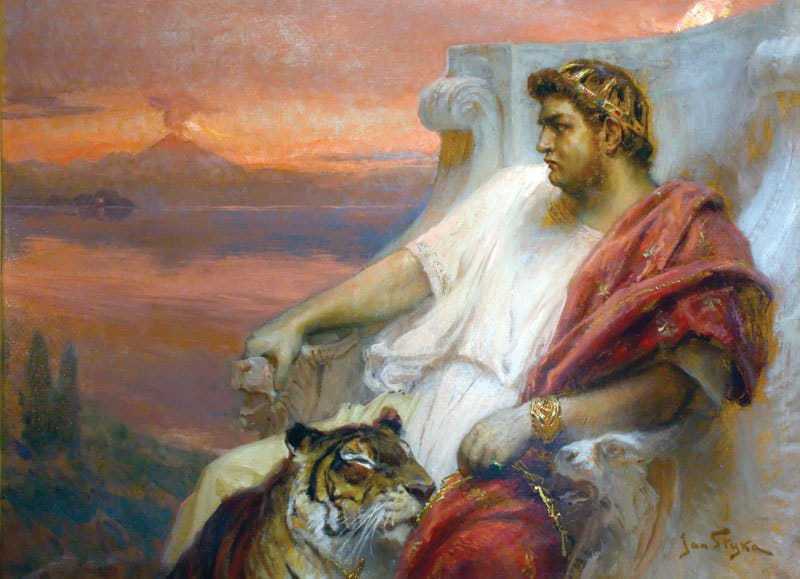 When he wasn’t indulging in wild sexual behavior or gluttony, Nero enjoyed a spot of murder. He had his first wife Octavia banished because of alleged adultery and also because she was infertile. Not content with this punishment, Nero had her executed in 62 AD. The emperor married Sabina in the same year and had a child that died in infancy. In 65 AD, Nero reportedly kicked his wife in the stomach when she was pregnant with their second child, and this action caused her death. The following year, Nero married Statilia Messina after forcing her husband to commit suicide. He ‘married’ Sporus in 67 AD because he apparently bore a resemblance to Sabina.

One of his most infamous acts was the persecution of the Christians whom he blamed for the Great Fire of Rome. Nero did this to deflect the blame as it was believed he was responsible for the blaze. The Christians were an easy target because they were a small and immensely disliked minority in Rome. According to Tacitus, those who were rounded up and arrested first confessed that they were Christians. Next, they were convicted, not for the crime of burning the city but for ‘hating the human race.’

Their horrific deaths were turned into a sport. First of all, Christians were covered with the hides of wild beasts and savaged to death by dogs. Alternatively, they were tied to crosses and set alight. As I mentioned in #3, some of these Christians would be set on fire for the amusement of guests at Nero’s parties.

At the beginning of his reign, Nero promised to give the Senate the kind of powers it had under the Republic. By 65 AD, the Senate complained that it had no power left and this resulted in the Pisonian Conspiracy. A leading statesman by the name of Gaius Calpurnius Piso plotted the assassination of Nero and intended to become emperor. A slave called Epicharis revealed the plot to a fleet captain without giving names. He turned her in and under torture; she offered more details including names although she did not completely betray the plot.

The conspiracy was eventually revealed by a freedman named Milichus and Nero ordered the plotters, including Piso and Seneca, to commit suicide. Over a dozen conspirators committed suicide or were executed as the emperor showed no mercy. The plot was a failure, but it was the beginning of the end for Nero.

5 – His Death Led To Civil Wars

The people of Rome were fed up with Nero’s tyrannical rule. Although he had provided assistance in the aftermath of the Great Fire of Rome, he built a decadent palace on some of the ruins and in 68 AD, he increased taxation to pay for it. Tales of his depravity and cruelty were well known and his extraordinary ego ruined the Olympic Games of 67 AD. He fell in the chariot race and offered poor performances as an actor and singer. Nonetheless, he was awarded victories because of his status and paraded around Rome wearing the crowns he had ‘won.’

The Pisonian Conspiracy was the first sign of open revolt against the emperor, but it wouldn’t be the last. In April 68 AD, Gaius Iulius Vindex, a Roman Governor in Gaul, renounced the emperor and declared his support for Galba. Nero failed to respond decisively to this rebellion, and support for Galba quickly grew, Galba declared himself legate of the Senate and the Roman People. Soon, the Praetorian Guard announced their allegiance to Galba and the Senate followed suit while also declaring Nero as an enemy of the people.

Nero ordered Lucius Verginius Rufus to quell the rebellion in Gaul and in May, he defeated Vindex who committed suicide. The legions of Verginius wanted him to become emperor, but he refused to act against Nero. Nonetheless, it was clear that the tyrant’s days were numbered. After a failed attempt to flee Rome, he returned to the city and woke up to find his palace guard had left.

Nero went to his villa and asked four freedmen to dig a grave for him. A courier arrived and provided a false report that the Senate had sentenced the emperor to die and he would be beaten to death. In reality, Senate members wanted to reach a compromise to ensure the royal bloodline remained intact. On June 9, 68 AD, Nero ordered Epaphroditos to help him commit suicide.

Cassius Dio and Suetonius wrote that the people of Rome celebrated the death of Nero. However, his death was to lead to a bloody civil war and instability as 69 AD became known as the year of the Four Emperors. Galba became emperor upon Nero’s death but was killed by the Praetorian Guard. Otho was emperor for only three months before Vitellius assumed the throne. Finally, Vespasian was recognized as the leader of Rome, and he reigned relatively peacefully for ten years.