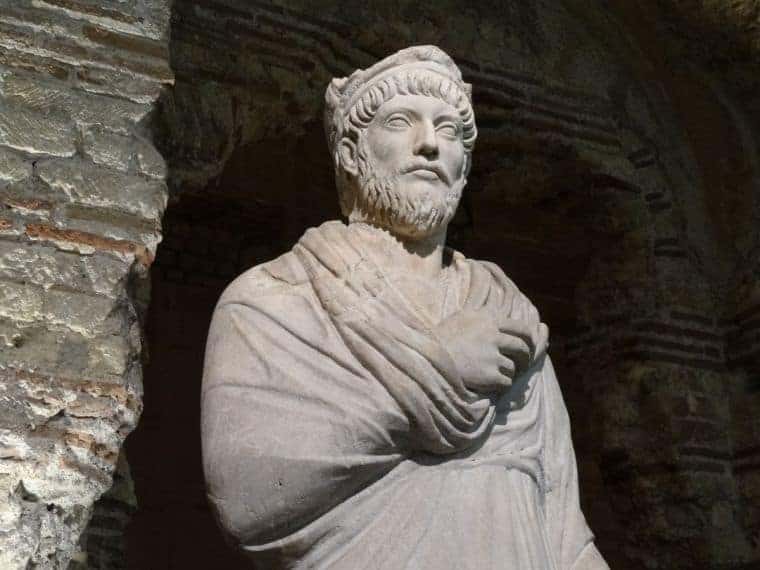 A Step Towards the Purple

There is little suggestion that Julian had an interest in becoming the emperor. He preferred to get lost amongst his books, but in 355, his world was turned upside down when he was declared Caesar of the West. Constantius believed he needed a representative in Gaul after recent rebellions, so he elevated Julian’s position as he was his last remaining male relative. Julian married Helena, the emperor’s sister, and was sent to Gaul with a small following.

While Julian unquestionably preferred the quiet life, he showed an aptitude for military command while in Gaul. In 356, he regained Colonia Agrippina and enjoyed a significant victory over the Alamanni in 357 at the Battle of Strasbourg. Further victories included a defeat of the Salian Franks of the Lower Rhine. The historian, Ammianus Marcellinus, is arguably the best source for information on Julian. According to Marcellinus, the Caesar took his role as military commander seriously and expected his men to handle rough conditions. For instance, he hated soldiers who slept on mattresses rather than on the cold stone floor.

Back home, Constantius was becoming more unpopular. He ordered his soldiers to attack religious dissenters, and an estimated 3,000 Christians were killed in a single day in Constantinople. By now, Julian was convinced that Christianity was corroding the might and steel of the Roman Empire. While in Gaul, Julian sacrificed to Bellona, the goddess of war.

Constantius finally went too far when Emperor Shapur II of the Sassanid Empire invaded Mesopotamia and captured Amida after a siege lasting more than two months in early 360. Constantius went above Julian’s head by ordering the Caesar’s troops to the East. Julian’s men not only refused to follow the order, but they also threw their weight behind their leader. His elite troops, the wonderfully named Petulantes, wanted to stay and they held a crown over Julian’s head. At the camp of Lutetia, which is modern-day Paris, Julian was declared Augustus by his men.

Predictably, Constantius was outraged and immediately declared Julian a public enemy. Despite his new status, Julian’s work in Gaul wasn’t completed. He successfully campaigned against the Attuarian Franks from June to August. By the end of 360, Julian was openly flouting his Augustus title by issuing coins with the term; some of these coins didn’t have Constantius’ name on them. In early 361, Julian defeated the Alamanni and captured Vadomarius, their king. By now, the would-be emperor had clearly decided that he wanted to rule, after all, so he started capturing territory outside of Gaul. Julian claimed that he went down this path because Constantius had declared him a public enemy. Julian said that he merely wanted to frighten his rival so they could speak on friendlier terms.

If this was his aim, he miscalculated badly. Constantius realized that he had to face the ‘usurper’ by force even though he was still at war with the Sassanids. He gathered his forces and set off west to face Julian. He enjoyed initial success by taking the city of Aquileia but soon, the city was surrounded by an estimated 23,000 men loyal to Julian. The pretender remained in Naissus waiting for news, but the empire was spared civil war when Constantius died from a fever on November 3, 361. It has been suggested that he recognized Julian as emperor in his will. Whether it is true or not, nothing stood in the way of the new leader of the empire.

Once Julian learned of Constantius’ death, he marched towards the empire’s capital city, Constantinople, and arrived there on December 11. Although he was openly a pagan at this stage, he still gave the former emperor a Christian burial. However, he quickly moved to restore paganism within the empire, and he restored the ritual of sacrifices. He also purged the royal court. All eunuchs, spies, and barbers were sacked as the new emperor moved to surround himself with people he could trust.

Then, he began the process of removing the importance of Christianity and relegating it to what it was before. One of his first acts was to issue an edict to state that all temples damaged during Constantine’s Christian experiment would be rebuilt. His School Edict removed the influence of Christian clerics in education. For example, they were no longer allowed to use the Iliad as a tool of learning.

Julian developed an edict designed to offer freedom of religion on February 4, 362. It proclaimed that every religion was equal in the eyes of the Law and also declared that the empire would return to its original eclectic mix of religions. It proved to be a dangerous move to oppose the new emperor’s edicts. Two bodyguards in Antioch apparently opposed an edict that forbade the veneration of Christian relics. They were executed for their troubles. However, Julian was up against it because Christianity had spread to the fringes of the empire and these citizens had no intention of abandoning what they saw as the religion of gender equality and social justice.

Death of the Apostate

Julian spent relatively little time in Constantinople. Within five months of returning as sole emperor, he left for Antioch and lived there until March 363. Then, he decided to embark on a dangerous campaign against the Sassanid Empire. En route to Persia, he stopped at the ruins of the Second Temple in Jerusalem and ordered a rebuild. However, the project was unsuccessful for reasons historians can’t agree upon. Perhaps the Jews in the city were ambivalent towards the project, or else an earthquake ruined the emperor’s plans. Other theories include sabotage and accidental fire.

In any case, Julian continued on his journey. He wanted to regain the cities lost to the Sassanids under the reign of Constantius II. He brought an army of 90,000 men with him and had initial success by defeating a larger Persian army at the Battle of Ctesiphon, the Sassanid Empire’s capital. Alas, he was unable to take the city. Furthermore, his general, Procopius, did not march on the city with his 30,000 men as planned.

Julian decided on a strategic retreat, but he was fatally wounded by a spear thrown by one of the pursuing Persians during a minor skirmish. He made the mistake of surrounding himself with too few men and was also guilty of not wearing his battle armor. Although he was treated by his personal physician, Julian was not able to recover, and he died at Maranga in Mesopotamia on June 26, 363. His successor, Jovian, signed a disadvantageous treaty with the Persians. Jovian died within nine months and was succeeded by Valentinian I.

One has to wonder if the premature death of Julian the Apostate changed the entire course of history. He was only in his early thirties when he died. Had he lived to reign for 30+ years, he may have succeeded in eliminating Christianity as a major religion in the empire. Remember, pagan beliefs such as Zoroastrianism still survive today so it is not a stretch to say these beliefs could have taken over at that time. How different would Europe, and the world, look now?